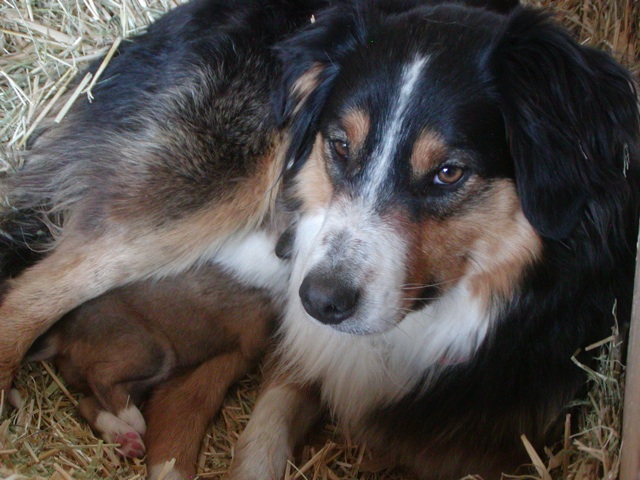 Three weeks ago, when the puppies were born, Dally was a confused soul.She wasn’t sure what happened, but she wanted to be part of it.

It earned her some whippings from Elsa.  But Dally is a persistent gal and her sympathetic hormones seem to rage full bore.Each time I took photos or checked on the pups and Elsa wasn’t there, Dally was brave enough to sniff, then lick, then watch in amazement.  She wanted more.

I was there when Dally first made her move.  Elsa had left, knowing I was there to watch the pups.  Dally zipped into the straw house and settled in, stretching out to let the newborns climb into her belly searching for nipples.  They willingly obliged her, attaching themselves in a unified search for nourishment.  All I could say was…. “OW!!!”  Eleven pups trying to get milk from dry teats just seemed like pure pain to me.

Then Elsa returned.It wasn’t pretty.I quickly told them to take it elsewhere, they were stepping on puppies!

Elsa resurrected her dominance.Dally quickly submitted.But Elsa let her stay.That astonished me.We had moved from “Stay over there and watch.”  to “You can be here, but behave!”  If a baby bottle had been available, this is where Elsa would have handed it to Dally and told her to BE CAREFUL.I continued to track this development, amazed that Dally would encourage the dry pacifier sucking of the pups.“Do you think Dally will have milk come in?” I asked of friends and relatives.  They all told me no…Guess what.Within a week of nurturing these pups, Dally’s four back teats are producing milk.Not a lot.She can handle four pups though… and does with happy abandon.

She is quick to admit they are Elsa’s pups and she is just a babysitter.  Elsa continues to remind her of that, just in case the temptation to steal some permanently would broach Dally’s mind.I’ve begun to help out some… a little udder balm seems to relieve Dally, who now, like Elsa, seeks comfort away from the pups on occasion.

Today the pups got their first real meal of dog food mush.  I’ll see if this tips the balance they’ve created.  I doubt it.  They have worked out a good deal, with no interference from me.  I’ll leave it to English Shepherd logic… it seems to have worked so far!