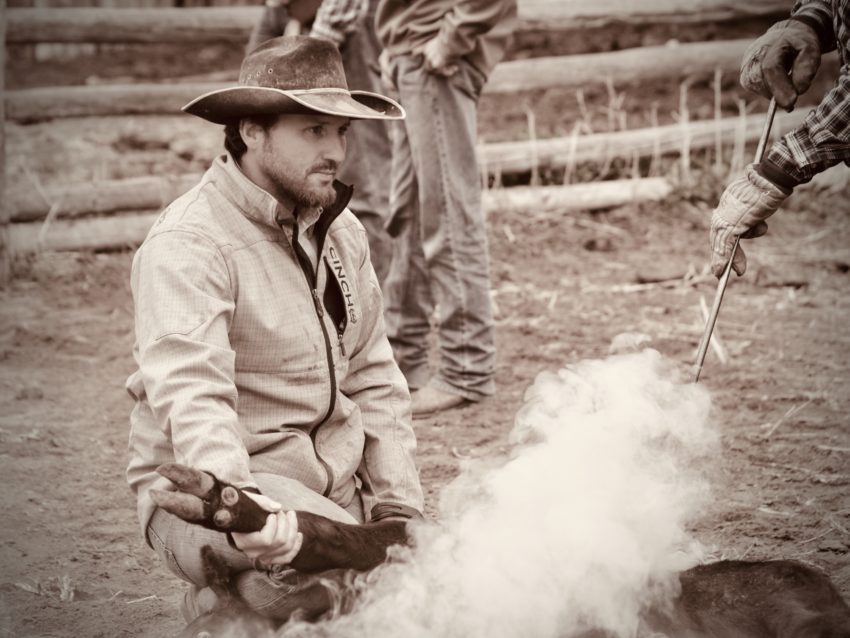 I christened this year, the Kids Branding. All eight of the grandkids were there, and with the exception of Reagan who was kept occupied by K., they all got in and helped.

Thankfully, most of our help just happen to be young fathers as well… so kids clambered on laps and “held” calves with the assistance of our nice neighbors.

Remember Jaxon’s story that he wrote? Well, he couldn’t hardly be any happier to hold a calf by himself this year.

That’s a look of pure determination and concentration. Of course, there was backup just out of frame… which was good because the calf lifted Quinlan up a few moments later and Jaxon lost his grip as well. Both dads were right there to save the day and stick the boys right back on until the calf was branded. Perseverance.

The girls got in on the action, too. I spent many a year wrestling calves before I worked my way up to vaccinating… and then branding. Since it’s a game of leverage and not necessarily pure muscle, girls are every bit as good at being a wrestler as the boys are. I’m sure in future years we’ll see them doing more and more. Pink coats and unicorn hats may become the new dress code…

Standing there with the guys at cookie/drink break ranks up there pretty high on some little kids’ lists.

It was over too fast… I barely got the photos I wanted… but I think I say that every year.

5 thoughts on “The Kids Branding”