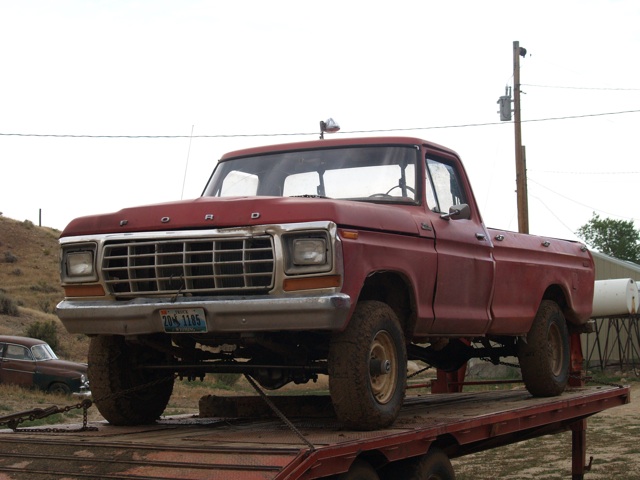 If someone… who knew ABSOLUTELY NOTHING about ranching… were to ask me…“What is your lifestyle like out in the middle of nowhere?  Do you round-up cattle everyday like on television?”

Ranching is a series of projects that in some convoluted manner, perhaps many steps removed, has some bearing in the life span of a cow.

But cowboying everyday?  No.  That’d be easy.  Almost.

Let me give you an example.

This is our ’93 Ford. Called “The Brown”. As of two weeks ago… it was a typical pickup.

Then Vernon had an idea.

The neighbors had a flatbed they weren’t using. We’ll put that on, and do some minor repair, and it’ll be great.

At the time we had 3 working pickups on the place.

Then Johnny’s ’79 Ford caught fire on his way to our Mesa pasture. He called me on his cell phone, wondering if someone could come pick him up.  He’d shoveled dirt onto the burning engine to put the fire out.  He was now stranded miles from home.  That’s why we got him the cell phone… yay!  that worked.  Unfortunately, he loved that ’79…

I think it has finally seen its last days…

But now… we need the Brown finished fast. We’re down to 2 pickups.

Then the boys went to help the neighbors kick their cows up to their high pasture. On the way back down the mountain, the Blue Dodge lost a bolt… someone didn’t tighten things as tight as they should have when they changed the brakes…

The Brown sat in the shop… virtually butt-less… a cab and nothing more.

The Blue sat up at the neighbors’ until someone drove to town to get a replacement bolt.

A ranch with no usable pickups.

The race was on. The boys welded and adjusted and fit and refit and in between, I primed and painted. The wiring went in and the license went on… and voila!

Johnny now uses the Brown. The Blue Dodge is re-bolted. And how does that apply to cattle?

A pickup is needed to check on water daily… no water… thirsty cows… Bad Deal.

A pickup is needed to haul salt and mineral to cows… minerals and salt intake both necessary for healthy cattle.

A pickup hauls fence posts and wire to hold said cattle inside pastures.

A pickup hauls guys to fields where they can irrigate hay, cut hay, bale hay, stack hay, and feed hay to cows in winter so they don’t starve.

Pickups haul horses to locations where for a few hours we can move cattle and “cowboy” and pretend that is all we have to do.

This photo? This is the first step in our newest project…