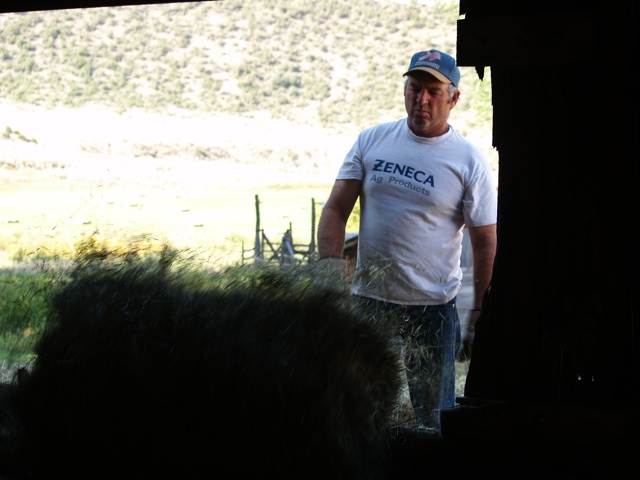 I’ve said it before…Our life revolves around hay just as much (if not more!) than cattle…

Of course, the reason we raise hay is because we raise cattle…and…strangely enough…those big ol’ critters tend to want to eat in the middle of winter when there’s snow on the ground…Cows are demanding that way…

But don’t forget! We have horses too…. As luck would have it…horses demand to be fed in the middle of winter too! The difference is…horse hay is stored in the barn…so we can feed them if we have them “in” versus loose in the pasture.

Big square bales don’t fit in the top of the barn.

Big square bales aren’t easy to pitch out of the hayloft if they did fit.

Little bales to the rescue!

Just so you get the idea of the hayloft…. It is the second story…. The upright boards under the roof and the top four logs comprise the walls…. Some of the floor planks on this end need replaced… so this year we’re pitchin’ the hay in the far end of the barn… because we’re too busy to take the time for the repair…. That’s the excuse I’m using today.

Vernon hauls the little bales from the field…. Usually this is a job for the kids and Vernon…. Because usually this is done earlier in the summer when the grass pollen is high… and if I help… I will have “rice-krispies” sounding lungs in an hour… tears will stream down my face… sneezing will replace talking… and breathing becomes a workout…

This year the horse hay is baled late… so I get to help!

Vernon is a smart guy. Since his hired help is composed of his 77 year old father and his wife (who has multiple excuses for being pitiful help)…. He decided to stack the little bales on top of some big bales…. So he won’t have to throw little bales up as high by himself. Did I say I was pitiful help??? He had to make two trips to the field…but…he didn’t overwork himself in order to make up for his small crew!

Backing up the trailer on this end of the barn calls for expert driving…<<Say “hi”, Willow!>>

*note the trailer dragging on the ground… eek!*

With expert directing as well…. The trailer is soon in place…about 6 inches away from the barn…. Yes…. I took a picture…. It looked like hay and dirt…Use your imagination!

The doors to the hayloft are opened…I snap this photo…Then…THUD!

I got put to work stacking bales in the barn!