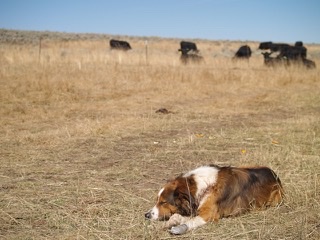 Unfortunately…the other day in between gathering the cattle and returning to wean the calves the next day…We lost a cow.

Lost as in *dead*. Four legs pointing to the sky.

Cows don’t tend to tip over as easily as sheep, but they do have one major method of unlikely death…They can easily get down on their backs and suffocate. If a cow lays down with her back downhill, she can’t get up.

Think of turtle on its back…. Then all of her weight crushes her lungs. Not a pretty way to die…<<for your information, I DID NOT take a picture of her… blech!>>

So this cow evidently decided to lay down next to the ruts of the road. They are probably 6-8 inches deep. She probably turned to scratch an itch and sealed her death warrant. We found her the next morning on her back in the rut…. Poor, sweet, STOOPID cow…

Why do I have to share this?? Because, out here, life isn’t always pretty… It’s not romantic all the time…. It’s not blissful ecstasy every day…. It’s not cowboys and nature and wildlife and livestock like some want to portray it…. I would rather be honest with you.

Who delighted in the death of the STOOPID cow… Because to a dog… death is part of life…. And bodily fluids smell wonderful to a dog’s nose…

Not so magnificent… Not so white…. Rather disgusting, in fact…. This honest dog did not just stink…

He POSITIVELY REEKED!!!
And he was so proud…. And we were awfully glad that he now rides in the back of the pickup…because he would have been tied in there anyway….

And be thankful this isn’t smell-ablog!!