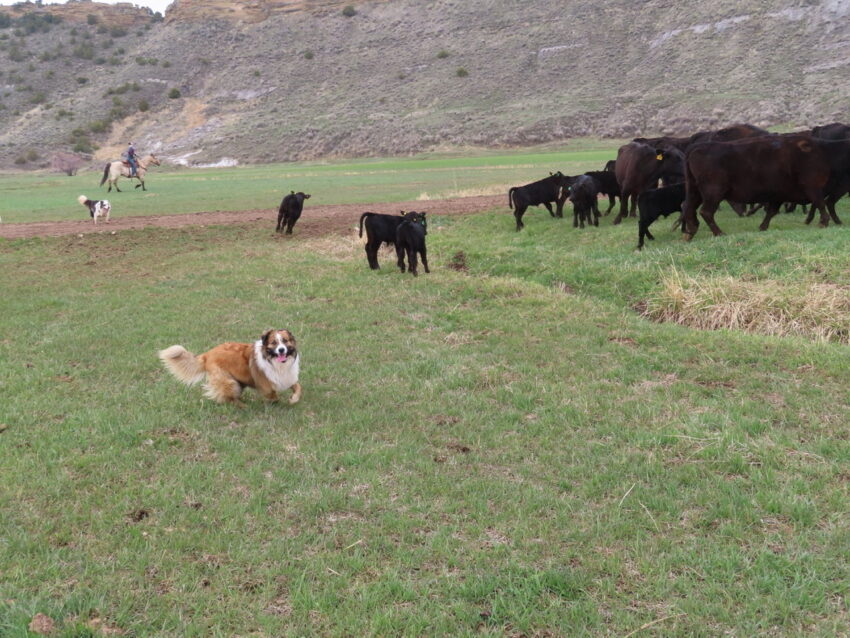 With everything going on yesterday, we didn’t quite get finished with all Vernon hoped we’d accomplish. It was a tad bit of a big order on a good day and with Tess’ accident, there was no way it was going to happen. By the way, she’s feeling better, though she’s fairly one handed, with all the difficulties that presents.

Today, we would only have Megan until noon. This morning was for trailing, what was it? 120 pairs or so? I can’t remember what Brandon said! Luckily, it was only a couple of miles… We had decided to keep them in the corral overnight, that way we’d be sure of not losing any that wanted to head back to the pasture we’d just brought them from. I predicted the cows would pour out of the corral, leaving their babies behind, cross the bridge and then just camp in the fields eating the green grass. I envisioned having to hold baby calves from running back while their mothers thought of nothing but green grass.

I was wrong.
I was so glad to be wrong!

Yes, the cows poured out of the corral, but we managed to keep the calves with them, as they about set into a high trot. Cows do remember routines, and they knew they were headed to new pastures. Daniel and I and Bravo kept the big bunch going while Brandon, Megan, Vernon, and Johnny had to struggle with one little errant calf who couldn’t find the gate that everyone else had just gone through.

Bravo was SUPER EXCITED to be going along, but he still responded very well when I’d call him off. I was very happy about that as a dog doing the wrong thing at the wrong time can really mess up a situation!
Low and behold, the cows did NOT stop to eat the first green grass they came to!

They kept moving right along!

There was one very happy dog…

Out under the ridge and across the big draw…

We only had to go through the gate at the top of the hill, then we’d hold them up, let them settle a bit, and pair them out, momma and calf, to make their way out in this huge pasture. Part of that plan came true.
We did get them through the gate… and we rode around to the front to hold them up. Usually, it may take a while for the cows to find their babies, but we do this every time we move them, so it’s their routine. Today, they were ready to take their babies and GO.

We started peeling them out of the bunch immediately, and they kept coming and coming. Oh, sure, there were some that tried to leave without their calf and some that got past us at one point or another. I had a mismatched pair get out on me, and I had to really convince the cow she had left behind her calf and the one that was following her was not her own. Up and down and back and forth, losing the calf along the way, I finally bawled like a calf when I had her pointed in the direction of the herd, and though my imitation is a poor one, it clicked enough in her cow brain that she *had* left her calf back in the herd. The other calf’s momma we turned out and she went and found it.

Usually, at some point, things slow down and I can take a quick photo or two… not this time! It was constant and fast and it kept us all hopping, holding the bunch, cutting pairs out, turning some back! I wish I’d had a drone in the sky to film it…

We were done early! Of course, then there’s the ride back, then the search for the pairs with the newborn babies, which included Daniel and I chasing one pair out of the brush across the creek… and for some reason, I didn’t take any photos of that either…

We stopped at lunchtime. The guys had a few more details left to do in the afternoon, but we can say, our busy few weeks of moving cattle is over! It’s nice to have that over and done!

5 thoughts on “Over and Done”