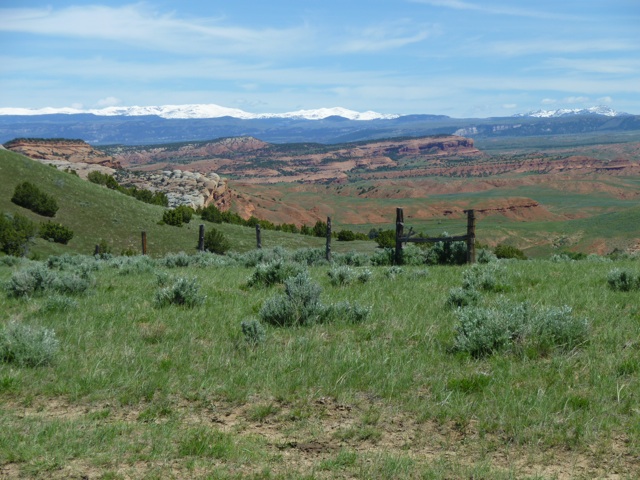 We began our gather (muster/roundup) today.

What we refer to as the “badlands” is not living up to its name this year.  The pasture is *gree-een*, with plenty of old feed from last year as well.  The Indian Paintbrush is bright and vivid… with orange and red the predominate colors.  I’ll have to get off my horse and take some closeups tomorrow.

Though I took plenty of photos… today I want to honor those who have given service to this country… plus give a flower to others we have lost.

Back in the day…When I was a Girl Scout leader… one of our yearly service projects was to decorate the cemetery.  While the American Legion Auxiliary placed the tiny American flags, the girls and I made sure every other grave was decorated with some flowers.  Some years I’d have 6 girls and a parent or two.  Some years I’d have my kids (my boys were often dragged into some Girl Scout activities like that) and no girls.

Sometimes as we went through the cemetery I’d grab a teachable moment… there are three special graves.

One, is a young girl, kidnapped, raped, and killed by her neighbor in another town.  Her headstone includes the Girl Scout trefoil, we’d give her a few extra flowers if we had them.

Another belonged to a high school senior, who I had for many years in Girl Scouts.  A victim of an asthma attack… we covered her grave in flowers.

Last was another young girl tragically lost in a four wheeler accident.  I’d known her since her birth… and had her in Scouts for years.  I’d watched her grow from an amazing tomboy to a young lady on the verge of finding herself and her potential.  I took every extra flower I could and let them frost her grave.  That’s one that really hurt for many reasons… and I still have her picture by my computer.

I miss Girl Scouts dearly… and every Memorial Day it’s the act of decorating the cemetery that I think of… first thing on that Saturday morning.

I send a little prayer skyward for anyone who fights in defense of this country.  Last year, I Netflixed a movie that I honestly just chose because the storyline had a link to Wyoming.  It’s called “Taking Chance“.  I don’t think I have ever *sobbed* through an entire movie like that.  Not political in any way… the story is the return of Chance Phelps‘ body to Dubois, Wyoming… and the officer that oversaw the journey of his remains.

If I were Queen… I would make *everyone* watch that movie.

But you also feel VERY honored and proud.

Watch it by yourself with a box of Kleenex in hand.

So for all you men and women who have served, thank you.

For all of you who have fallen, I salute you.

For you, my sweet nephew R., who will be returning to action, this time to Afghanistan in the fall… a photo for you.

Wyoming decorated itself it white, blue, and red (and green!) in your honor!