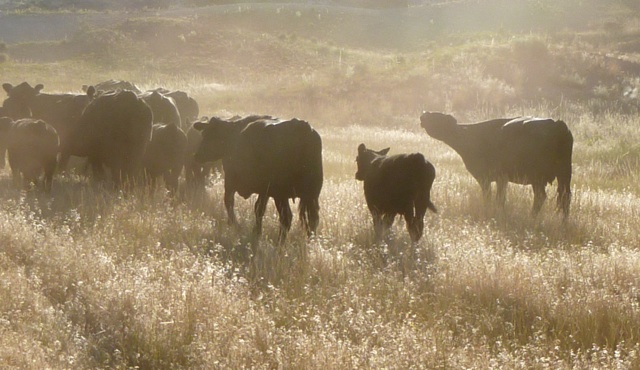 The thing about moving cows up the mountain at first light… sunlight gives your photos that glaring-gotta-squint look.

The golden-dried-grass-dusty haze spreads its aura.

Then the romance disappears…   Panama throws a shoe… and limps along the road.   Fine.   I’m off and leading him…   It’s good for me, I contend… until we pause to let the cattle trail through a gate.  Panama steps forward onto his reins, then pulls back suddenly when he feels he’s going to be sucked down into the BIG HORSE EATING MONSTER THAT HAS HIM TRAPPED.   POP.   There goes my headstall!   My reins and bit lay on the ground.  The throatlatch and browband remain on Panama.   I cuss.   I admit it.   To my mother’s eternal dismay and my boys’ embarrassment… I did NOT call Panama by his proper name.   Just this morning I had thought to myself… This headstall is nice and even a little *gasp* pretty. (It’s actually Daniel’s but I use it)  It is a stamped Billy Cook. It now joins the list of my headstalls that have been broken this year.   I broke my rawhide one… had it repaired.  Then Brandon’s brown horse broke it again.  I didn’t pay too much attention… it was the same day Vernon backed my Durango into another car.
Then my new/used headstall  …was again stepped on and pulled back and POP!  There we go again.   I know… don’t let your horse graze with the reins on the ground.  Use slobber straps.  Don’t tie your horse with the reins.  Well, poo!  I don’t pack a halter around… I’m not buckaroo enough for slobber straps and mecates.  And using a halter underneath your bridle… just looks *messy*… and I’m not a fan.   So I’ve paid for it.  With three pretty headstalls.  That’s what I get for trying to add some bling into my life.   Brandon repaired it with some breastcollar pieces artfully crafted into a temporary headstall… and Panama and I managed to make it to the horsetrailer.  We quit… figuring we’d just take it easy from there on out.   I was planning how I’ll merge the three broken headstalls into a creative mix of styles and perhaps make two… and wandering around kicking the dirt.   LookieLookie what appeared!

A point!  An arrowhead!  No tip, no base… but the center of a point for sure!   I did Snoopy’s happydance!   It’s the first I’ve found for a while and wheeeeee!  I felt MUCH better!   So maybe I’m not meant to own a blingy, girlie, impractical headstall…   but if I can find points…   I’ll be fine!