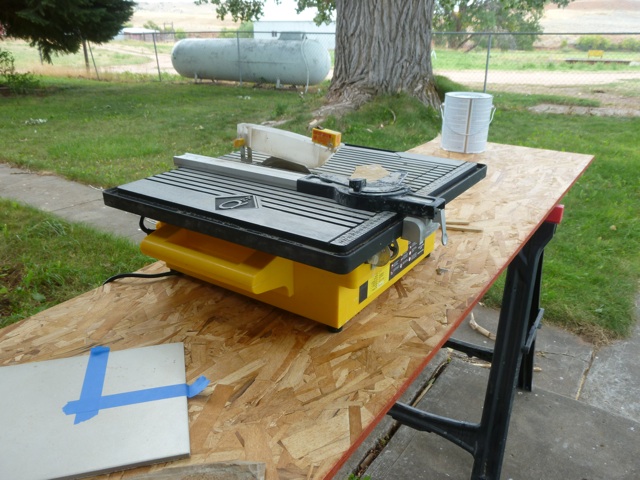 My new toy…no, it’s not a Wii… (people tell me I should want one, but I don’t think so)

no, it’s not a new iPod… (I’m very happy with my “ancient” gum stick iPod)

no, it’s not an iPad… (though THAT is on my Big Wish List – the one that I’ll get if I win the Lottery)

no, it’s not a Dobsonian telescope (also on my Lottery Wish List)

no, it’s not a new dog kennel, agility equipment, ducks or goats

no, it’s not clothing or shoes… (ewwwww, anyway – except for sweatshirts and hiking boots!)

What is it, you ask?

I’m sure it’s on every woman’s wish list…I’m the proud owner of a new (used) tile saw! Tile saw. A saw you cut bathroom tile with? Yeah. One of those. I’m thrilled.

Not only can I supposedly now tile my bathroom, I can also cut my fossils into manageable pieces… their sandstone matrix is softer than tile… and I can also cut deer antlers into buttons or handles. Cool. This afternoon I was set up and ready to go.  There was a stiff breeze though, and I had to weight my table down with 4 gallons of paint!

I played with my fossils first and I had a great time!

Remember my idea for my fossils? Time to trim them down! A few seconds later…

The fossil is now the center of attention, you don’t have to search for it!I had much success with this and was very gung-ho about the whole process.

Unfortunately, I then moved on to tiling my bathroom.

I think my thin set was too thin.  The tiles kept sliding even though I had them taped in place and the suction was GOOD!  I had placed seven and had to take them down.  Then I had to scrape the wall.  Scrape the tiles.  Wash the tiles.  Decide what to do with my thin set because by then it was starting to dry.  I had mixed too much with too much water.  It was TOTAL FAILURE.  I couldn’t bear to waste the mix, so I hauled it out to my Studio and applied it to the rough shelf on the top of the nestboxes…  It may prevent me from getting a few splinters in the future.  Or it may need to be scraped off and discarded, but I feel I at least tried to use it productively!

Then I spent what felt like a loooong time cleaning up the trowels and buckets and my new saw.<BIG HUMONGOUS GIGANTIC SIGH>

I shall have to try again. Unless…Unless…. There’s a volunteer out there somewhere! I’ll cut the tile with my new toy… you stick ’em to the wall!