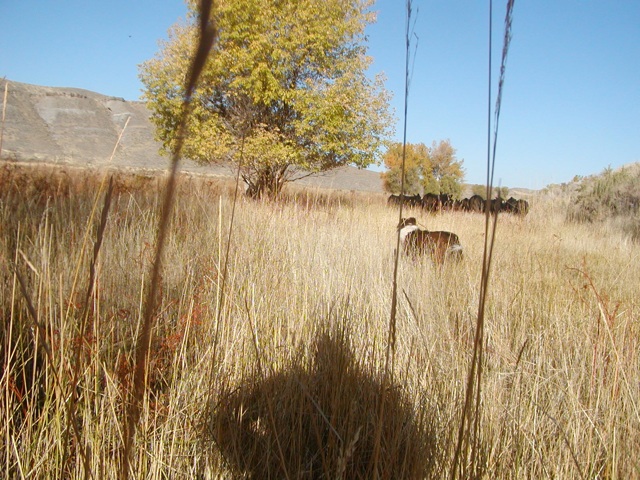 For those of you new to the blog, every Thursday I repost a blog entry. Today’s entry is from October 18, 2010.

It musta been a Monday today.   Sometimes the only way to know what day it is around here is by what you end up watching on television when you collapse into the recliner after dark.   It was much easier when there was only Monday Night Football.  Now with Thursday, college Saturday, and Sunday football as well… it does get a little tricky.   But you get my point.

The day started off with the plan of priming some on my bedroom at the Mills Place.  I’m checking emails… laughing at http://montanaforreal.blogspot.com  AGAIN.  She’s right on the money with that post… having a cup of coffee… when Daniel walks back in the door.

“Huh?”  <Which has to be the most intelligent reply for any comment in the world>

“We’re moving the calves down to the school section.  Dad and Grandpa aren’t here, but I figured you and I could get started.”

It’s hard to admit a brain fart to your son… but I honestly forgot the plan for the day.   That meant, gee, maybe I’d need some contacts in my eyes… some socks and cowboy boots instead of slippers… a good bra.  Hey, don’t laugh.  A good bra is NECESSARY for any cowgirl…   I keep apologizing for not being ready… while I zoomzoom around the house grabbing jacket and boots and hat while brushing my teeth.   I slap some duct tape on Lucas’ paw and inform the squirming pup that, yes, today he could go along!   Daniel buzzed us over to the corral and we were off.

We rode through the grazing calves… always a test of dog control… and Lucas did OK.  We reached the end of the fields, turned around and gathered all the way back.  80% of the time, I was happy with Lucas, but we did have a collision of heads when it came to the ones that crossed the creek.  I realize Lucas is NOT a gathering dog… but I keep thinking he’ll figure it out.

No dice.  I admit to losing my temper as well… hiking in slick cowboy boots on rocky hillsides TWICE just doesn’t set well.  A gathering dog would have saved me much pain… but Lucas is a driving dog.  He’s quite good at *that*.

Ah well.   We had to cut a couple of lame calves out of the bunch, so while the guys did that, I took Lucas home.  We’d only gone a few miles, but he was tired and shaky, though, I could also tell his eyes were shining!  He was NOT agreeable to entering the kennel and being replaced with Dally… but… I’m the boss.   Another 4 miles of riding and it was finally time for lunch.  Dally did great!

Back at our house, our neighbor had left us a message.  We had four bulls in his pasture.   Guess we’ll go dig them out.   I’m interested… but cautious.  I’d hate to throw my back out again.  I throw my hat in the ring and after lunch, I join the guys.

We ride and ride… under the red chugwaters… and oh, yes, my camera batteries had given out… but no bulls.  Round and round and through the brush.

The brush that tries to sweep you out of your saddle.  Where you grab your hat and lean forward since the brush will be trying at every turn to unseat you, smack you in the face, rip your shirt, key your saddle leather, or poke your knee.  Where creek crossings are dicey.  Remember my “bad” back?  Riiiiiiiiiiight.  Forget that after you’ve slid into the creek and lurched out the other side.  Where the 3 foot wide creek causes your horse to think he’s in the Grand National.  And, shucks.  You’ve left your jumping saddle at the barn.

I’m glad Daniel didn’t have a video camera with him.

Riding back towards the horse trailer… I’m lucky and I see 6 black legs in the brush… I was short two legs… but I figure they have to be there somewhere.  I shout down to Vernon and he’s hot on the trail of two bulls.

Along the way we pick up 2 cows and a calf of a far away neighbor… wilder than hickory.   <I just typed that and have no idea where that came from… but I like it!  WILDER THAN HICKORY!>

Zoom.   Zoom.   Daniel and Vernon zoom.  I’m wanting to take it easy, I can feel the muscles in my back starting to protest.   A mile of chasing and we have the bulls in our pasture, the cows on the highway.   We trail two more miles down the highway, hoping to stick these wild beasts in the corral so their owners can come get them.   Got ’em down the highway, but the corral part took about an hour.

I think we earned our dollar today.

I want a hot tub.

I want a masseuse.

I want a good book, a cold beer, and a warm bed.

Not necessarily in that order.