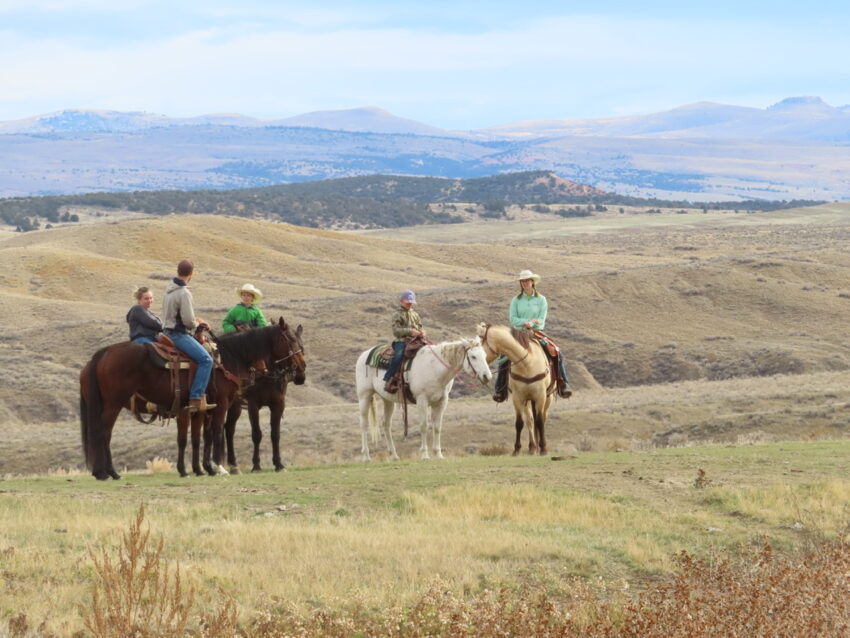 “This is not how I had planned my day…” says ten year old Quinlan.

Difficulties with our pipeline had us worried. While I had just been bragging on the miles of pipeline we had across several pastures, something was wrong. Cattle drink a lot of water, and can quickly suffer without it. They had no water in the tanks and due to the drought, there was no water in any reservoirs either. Our emergency plan for the day was to gather the cows, trail them to our private ground, water them, then return them to their BLM allotment.

While some people worked on the pipeline, others hauled out some water to a few tanks, and we were in charge of watering what cattle were standing on this side of the pasture.

The situation was not dire but we didn’t want it to be, either. As we watched and held the cattle on the pond, part of our crew decided to get started on gathering up more cows.

It was Jaxon and Quinlan and I left on the job! The boys LOVE being able to move their horses and actually DO something as opposed to fighting with ornery ponies they can’t get to do anything.

As the cows had satisfied their thirst, we began to put them back in the correct pasture. Some were reluctant and I had raced ahead to turn them the right way. Quinlan pops up on a hillside. “GG, there’s some cows down here we need help with!”

Having corrected my cows’ direction, I began to wonder how much time I should give the boys before I went to help them. I wandered Panama over the hill just in time to see the boys successfully bring five cows to the bunch. Their confidence was shaken when two broke off and headed the wrong way. “Go get them!”

It wasn’t pretty. A few more directions were yelled. The cows were turned the right way once again. “Sweet! Great job!”

I had two little cowboys with a bit of swagger as they rode. A little confidence goes a long way at this age. A bit later, Jaxon told me he had some pretty good stories to tell about his day…

The pipeline was repaired. The cows were watered so they wouldn’t break the tanks as they refilled. Cows were located to avoid overcrowding. We had a quick lunch and rode back to the horse trailer for the ride back home. Mission accomplished.

And though it wasn’t what we had planned for the day, a couple of us had some awesome new experiences…