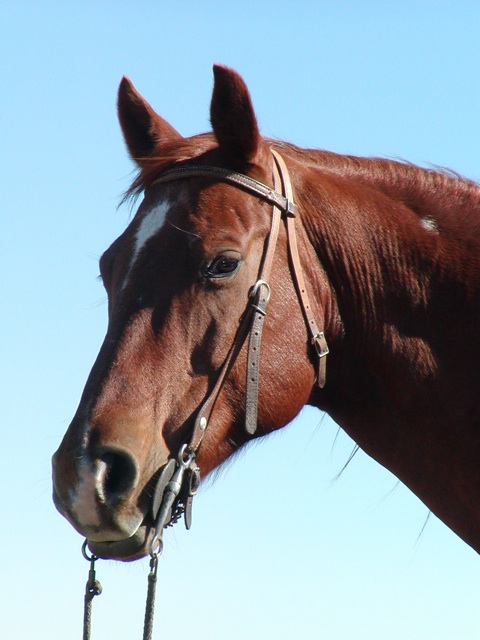 I can’t remember what his registered name was.

I do remember he was my mode of transportation for many, many years.

He was a sweetheart.

Brought up from Oklahoma by a guy from Hyattville, Wyoming…  This man used to drive to Oklahoma, buy a new horsetrailer and load it up with watermelons and drive back to Wyoming and sell it all! One trip he came back with a sorrel horse.  The horse gave him fits when it came to catching him, so he nicknamed him “Pavo”.  That’s Spanish for “turkey”.

He found the horse to be on the small side for what most ranchers are looking for… they want some big stout thing that’ll drag calves to the fire… and Pavo was almost delicate.  He had a tender mouth, and the man didn’t want to sell him to some rough cowboy that would jerk on the reins.  He wanted to find a woman that needed a working horse.  That woman turned out to be me.

Pavo was four.  More on the young side than I ever prefer… but he only acted young once… the rest of the time he was steady!  I knew one thing… Pavo needed a new name.

I found him to be *very* light in the mouth… a lift of the reins was about all it ever took to turn him… soon a little leg pressure would indicate what trail I wanted him to take and he’d scoot along the right one.  He just “bent” very well.  He was limber.  And he was red.  And being from Oklahoma… and I’m from Oklahoma and Choctaw… I just had to give him an Indian name.  It just seemed right to call him Red Willow Dancer.  I hardly ever shared his “complete” name with anyone, but that’s how I thought of him all these years.  To everyone else… he was Willow.

Now I admit… I spent lots of time peddling him.  He wasn’t the fastest walking horse out there.  I tried to work on him, but honestly, I’m not that good of a horseman.  We were stuck behind the herd mostly anyway, so slow was a good speed.

But then.  We’d have to sort something out of the bunch… or pair cows and calves in a new pasture.  Right then, his personality changed.  He was ON!

Just try it.  Try to get past him.  If something did, it was because I pulled him up… too chicken to chase that calf across ditches and 5′ tall sagebrush.  This is where I loved riding him… and where I felt guilty for being such a mediocre rider.  He needed some young guy with no fear to hang on and let him go!  That wasn’t me… but he tolerated me anyway.

Then one year… he was lame.  Diagnosis?  Stifled.  Basically he had a bad knee.  We hauled him over the mountain to Sheridan, to a vet who had a good reputation as a horse vet.  I remember unloading Willow and the vet coming out… watching him with his gimpy walk and asking maybe two questions.  Then he walked up to Willow, felt his right stifle joint (now picture this… the stifle is the joint right under the flank… and it hurts him… and it is usually not recommended to mess around strange horses (or any) right there) The vet then continues to hold the right stifle in his right hand, he stands behind Willow’s tail and reeeeachessss around, stretching, and grabs his left stifle in his left hand.  My jaw must have dropped open, because the vet looks up at me and says, “Maybe I should have asked if he was gentle first!  He should have kicked me across the interstate!”  Uh, yeah, duh.

But Willow was gentle.

A stifled horse is not good news… But the recommendation came down to pen him up for a month… Complete rest in a small pen… Then gradual work on hills… increasing in height.

Willow hated staying in the calving shed… I cleaned his “stall” and brushed him, but he hated it.  The other horses were free… he wasn’t.  Then finally came his months of rehab.  Riding up and down hills was easy to do around here.  I investigated more nooks and crannies that summer!

Finally… he wasn’t near as lame as he had been.  He was left with a swinging little extra getalong in his gait.  On occasion you could hear a little “pop” in the stifle.  But he wasn’t acting sore.  He wasn’t swelling.  When you went downhill, you took an angle, not a “ManFromSnowyRiver” dive!

I could live with that.  Evidently, he could too.  He might still be my top horse, but I’d start riding Tart on occasion, or Kate, or whoever… just to give him time off.  Unless we were sorting pairs…

Finally, came the time every horse person dreads.  The day you know will be your last time on your favorite horse.  You relish the interaction you’ve developed.  How in sync you can be and you don’t even realize it… until you climb on a different horse.  This isn’t arena or trail riding out here.  You’ve been everywhere together… even that steep shaley hill I didn’t want to go up, but Willow was going after that stupid cow!

That time on the Mesa when we had our biggest argument, and Willow won.  My landing was cushioned by a large cedar and I can’t even say that it was a real buck, more a difference of directional opinion at high speed.  It didn’t hurt and I laughed!

The one time he got me… he got me good.  Back in the day, we’d ride a horse during calving season (pre four wheeler days).  I was riding Willow, Vernon had taken the tractor and left me… there was a bull laying down in an unusual spot and I turned Willow to go check him out to see if he was sick.  Now it’s winter.  It’s a BIG BLACK BULL.  We ride up to within 6 feet of him, AND THE BULL STANDS UP. Willow thought he was the Monster From the Black Lagoon and left the territory.  Unfortunately, I didn’t leave with him.

Willow was so quick, there was no time to make a grab for the horn.  He was just GONE and I was laying on my back, looking up at the cold winter sky.  The wind in my lungs came back, and everything seemed to be working.  As I sat up, my neck was wrenched.  I had whiplash for two weeks!  But I was MAD.

How could he have missed seeing the BIG BLACK BULL?  And, oh boy, you better not run off and leave me to walk the mile home!  Willow hadn’t run that far, but he was wall-eyed from the scare… and he also knew he was in TROUBLE.  I walked up to him… that “turkey” that was usually hard to catch… and grabbed the reins.  A turn or two around, and his lower lip loosened up and he relaxed… I climbed aboard and didn’t look to the side or behind me for two weeks!

I always thought I’d want some remembrance tail hairs to braid a hat band or something… but no, I’ll let you gallop smooth with all your red hair flying… Thank you, Willow, for the miles, for the fun, for teaching me, for letting me hug your neck and breathe that horsey scent of you… MY horse.  My Red Willow Dancer.