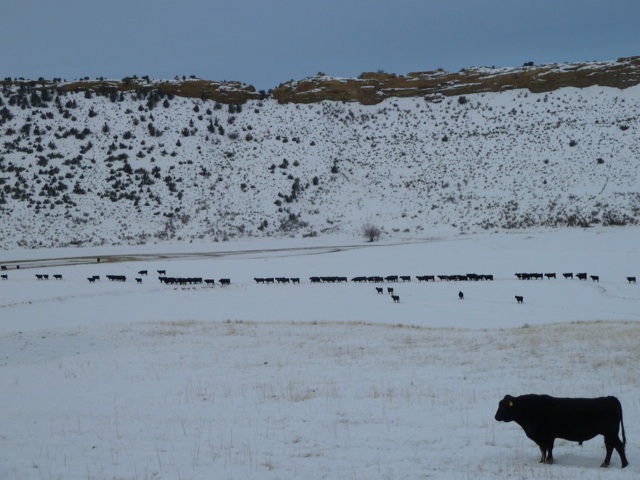 My help was requested this morning, so I found myself driving the tractor and even pitching a little hay.  It was a VERY nice morning… in the 20’s… so that means 50 degrees warmer than the other day!   Plus, driving the tractor also means *heater* and *radio*.   Koosh life.   <How do you spell koosh?  cush? whatever.>

After that was all over, I returned to the house, where Daniel, done with his feeding as well, informed me that Johnny told me wrong… his flight for his vacation left 2 hours earlier!   YIKES!

No time for a shower… just freshen up and try to brush all the hay out of my hair!   Vernon has a cold and didn’t feel like going… so Johnny and I soon headed out to Worland, the closest airport.

It’s a tiny brick building, half of which has been devoured by TSA machines and roped off areas.   The smiling girl behind the counter asked if we were flying out on the afternoon flight… Yes, sweetheart, that’s why we’re packing bags in here!

“Sorry, but that flight has been cancelled!”

Guess what?   When airplanes land and get flat tires… they can’t fly until some trucker hauls them a new tire from a different city!  Somehow I found that extremely funny!

But the options were… wait and fly out Saturday…   or…   drive to Riverton (an hour and a half further down the road) and catch a flight out of there!   Guess which one we chose!   That’s why I’m just humming along… been on the road too much!

But… that gave me the chance to try to buy some curtains… we’ll see if I like ’em… plus, best of all, I bought a bucket of Kentucky Fried!   I love Kentucky Fried.   Original.   Sticky chicken.   If you wanna make me happy when you come visit, bring me a bucket!  And some cole slaw.  I’ll take the potatoes and biscuits too… I’ll toast up those cold biscuits and have ’em for breakfast!  With sorghum.  YUM.   I guess I just live too far from the Colonel and somehow it’s just developed into a Big Treat for me.   I’m a Happy Girl!   and tired.

Here’s this morning’s picture…   One of our bulls and some of our cows head to their respective feed grounds under the rimrock.