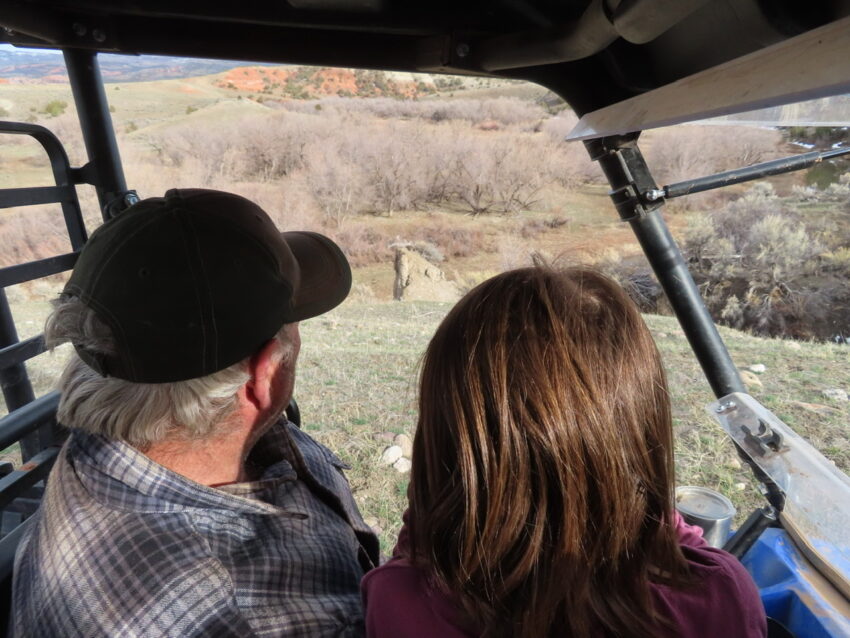 When any grandkids go along on an ”adventure” with me, we usually find a treasure. A cool rock. A feather. A weird stick. An antler.

But when Vernon’s driving, we go zoom. From one place to another. I’m more of a wanderer since it’s easier to spot treasures that way.

Riding in the side by side, Quinlan had pointed out a couple of treasures he’d spotted. ”There’s an antler!” We keep driving. “Is that a skull?” We keep driving. When we drove by a deer skull with antlers laying in the center of the road, Vernon simply slowed down and said it was ”too stinky” to take home. I didn’t smell anything and Quinlan looked doubtful when he was going to lose out on such a grand prize. By the time we had made a loop and headed home, Quinlan was sad he had gathered no treasures.

We zipped up to a gate, and Quinlan and I spotted the same thing at the same time. ”There’s a cowboy hat over there!” ”No,” I insisted, “that wasn’t a cowboy hat.” ”Yes, I think it was!” He had the door half open and ready to spring into a quick sprint to claim some sort of prize. ”Quinlan, it’s way on that tower, you can’t get up there!” ”What are you looking at?” Vernon questioned.

He backed up the side by side as I pointed. ”That.”

The photo is misleading. The grey tower/point/knob between their heads is easily 20’ high and eroded away from the main land. No way was Quinlan going to climb that! Vernon pulled out some binoculars and I zoomed in with my camera.

Well, there was SOMETHING there. I zoomed in more.

It was a Canada goose! She was laying on her nest and she didn’t flutter a feather the entire time we were looking at her. It wasn’t until I got home and loaded the photos onto a bigger screen that i realized you could actually see two of her eggs!

Vernon was quite impressed with Quinlan’s spotting of this treasure. He dubbed it “Cowboy Hat Goose Knob”. It wasn’t a treasure he could take home, but maybe it’s one he’ll remember as the years go by.

4 thoughts on “As The Years Go By”