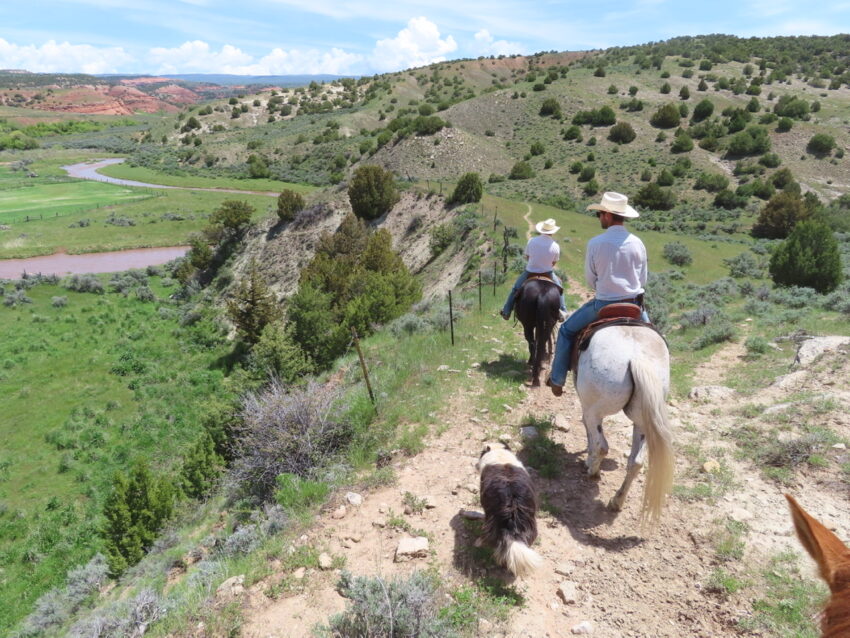 Yesterday was a longish day and when I arrived home, it took me about five minutes before my eyes were drooping and my head bobbing. Some days are like that, so all you got was a photo.

Usually this time of year, we’ve been gathering our cows out of the badlands pasture and bringing them in to various smaller pastures so we could breed them to our own bulls. I can’t really tell you how long we’ve been doing that, but before that, we had a different system. The ranchers that share the grazing lease on this big Bureau of Land Management pasture put out enough bulls to breed the amount of cows they have. The problem is, you don’t have any control on whose bull breeds your cows. It’s a simple style and it works, but if you’re tracking genetics, it’s not the preferred way.

Nevertheless, it is the plan for this year… so off we go to gather our bulls!

With the creek being so high from the recent rains, we were going to gather only one side of the creek.

We ride through the trees, ducking branches, delicately maneuvering through a haphazard hopscotch tangle of logs on the ground.

With bulls bellowing at each other and at our disturbance of their rest, at first the barking sounds coming from overhead didn’t register. Soon, though, we were all looking skyward. We had blundered into a blue heron rookery and disturbed them off their nests.

We quickly left them alone. Daniel described the herons as pterodactyls and it did have a bit of Jurassic Park-ness about it.

We continued on, picking up four bulls and losing two that chose to swim the creek. We were smart enough not to follow them. For a little bit, things got western… one bull was a little hot and had to be encouraged to go the correct direction. Believe me, the camera doesn’t come out during those times!

We managed to get them with some cows and kicked out farther in the pasture, but we soon had to return, we had a birthday party to attend!