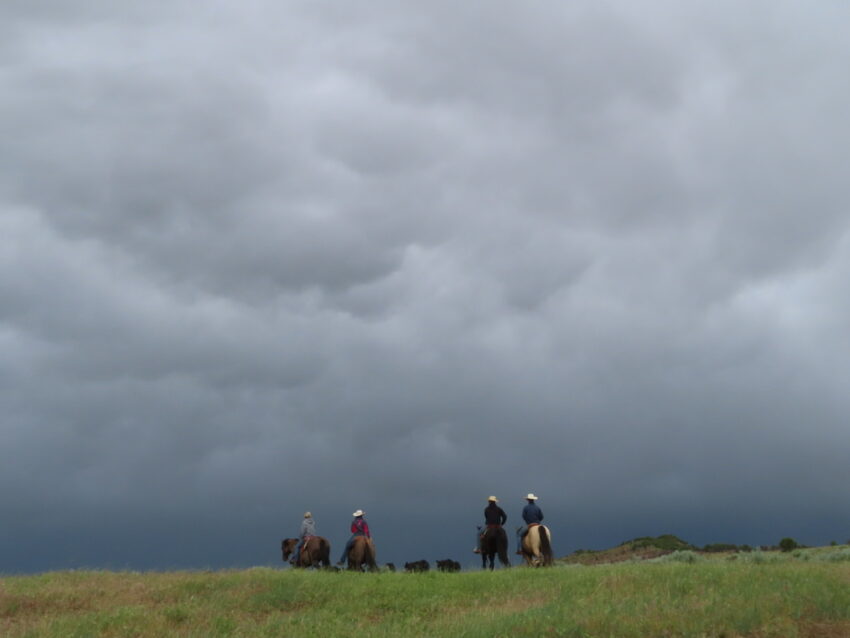 I know I shouldn’t wait until late to write, but it seems like I always do.

We spent two days riding, gathering the badlands. We are missing just a few, and Vernon and Daniel searched again today and found a couple that belong to some neighbors but not us. There’s many a hidey hole out there… and miles of pasture. They’ll be found eventually.

I was babysitter yesterday. With five kids and lunch, I headed out to meet the crew. They were just finishing sorting the last of the bunch.

After our cows were paired through one gate and our steers into a sorting pen, and two neighbors had theirs, we held ours in place while we ate lunch. We watched the sky… rather than riding off, they decided to wait until the storm passed while there was minimal shelter in my Durango.

Four adults, five kids, and a couple of dogs watched it rain from inside, while outside, three adults and the horses sheltered on the leeward side.

Zap was very unimpressed when lightning struck not far away. Then, when Daniel stood up to retrieve his horse, his hat blew off and spooked Zap again. A little crowhop and Daniel caught up his reins. The storm didn’t last long, but we were happy to have shelter for its duration.

In minutes, the steers were released, I tried to video them for the sale this Thursday, and the cowboys were off to trail them home.

5 thoughts on “Trail Them Home”