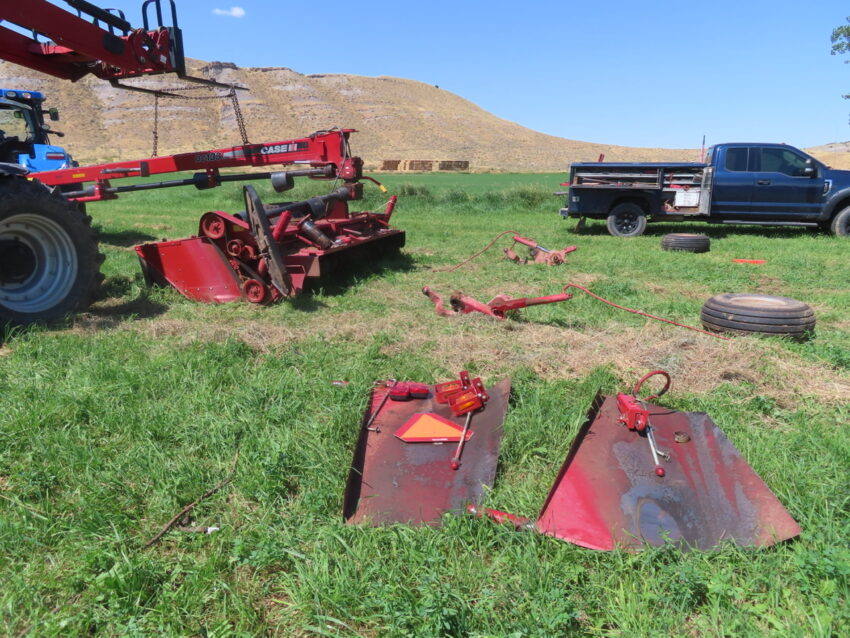 Pieces lay scattered through the grass: a pin, a chain, a crowbar, a tire. We pulled up in the pickup, and, as usual, I was instantly amazed. What lay before me in the field appeared to be a mechanical troll’s irritated vengeance. A piece here. Another there. Chaos.

I remembered the phone call.

“Is the boss there?”

“No. But he should be back soon, he went to irrigate. What’s up?”

There was no doubting that Daniel’s voice was full of … emotions. Disgust? Regret? With that unmistakable reluctance to have to admit to his father, “the boss”, that *something* had happened. I recognized the tone.

“The disc mower is broken.”

Now, I’m no mechanic, but when the *frame* of a piece of equipment is broken, even I know that’s not good. Fast forward to today. The new frame had been shipped to Billings, Montana, and Daniel had traveled to haul it home on a trailer. I heard them say it was the only one in the entire U.S. that was available… well, we scored some points there!

Farmers and ranchers are often heard saying (and I’ve said it myself), that 1.5% of the population feeds the rest of the nation and some others across the globe as well. We’re *production agriculture*. But, to be truthful, we couldn’t do it without guys like T. who showed up today to supervise the installation of the new frame.

T. is who the guys call when they’ve tried and wrestled and fought and researched and still aren’t having success in repairing tractors/balers/disc mowers.

With two tractors and a skid steer, they went to work. I’d like to say I helped, but all I did was run back to the shop for a tool.
Step One: replace the bracket on the frame that holds the tire. (Please do not think I know the proper terminology. I don’t)

Well, that was easy.

Spoiler: The rest of the process was not.