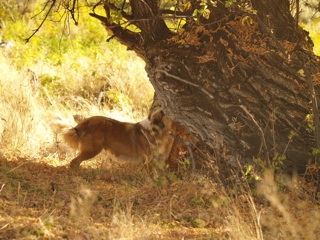 The dull thud echoed around me.  The crunch of fallen leaves as my 3 dogs zipped through them were silenced and the resulting quiet was broken by the hollow thump.  Curious, I quickly dropped my camera from my eyes, and looked around.  My dogs were nowhere in sight.  I had been focused (pun intended) on some gorgeous golden leaves and ignored my dogs for just a moment.  Now I hiked around some boxelders to see Elsa intent on something.  What was she DOING?  The thud matched her movements, and I had to investigate. 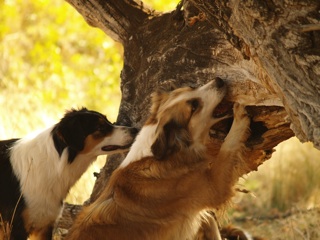 Elsa, with determined support from Dally, was eating a tree!  The thud was Elsa ripping into the hollow of a boxelder and tearing off chunks of bark and wood.  This was serious work.  Elsa ignored me.  As she backed away I could see the hole that existed, and she was remodelling.  Pawing and chewing, Elsa conveyed her intensity which I only see when she’s definitely after something.  Evidently, they had chased a rabbit or some other critter into the hollow trunk and decided this opening provided them the best opportunity for success in reaching and destroying said critter. 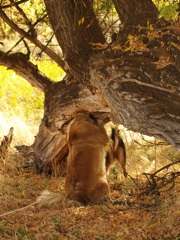 I stood and filmed her actions.  Here’s Elsa’s rendition of a beaver stance.  Never mind the butt shot of Dally, she’s sniffing the limb where it meets the dirt.  And besides, Dally still has a cute butt, she’s young and healthy.  She doesn’t share her mother’s broadened butt.  As my dad used to say… “Some butts are buttes.”  Get it? 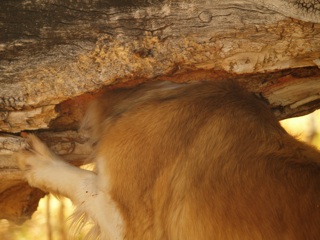 Where’d she go?  Yes, folks, that is my insane dog sticking her ENTIRE HEAD into the tree, smelling her prey, just knowing she’s close to success.  She’s pretty lucky that her prey wasn’t aggressive!  I wouldn’t stick any part of MY body in there with the option something could bite it! 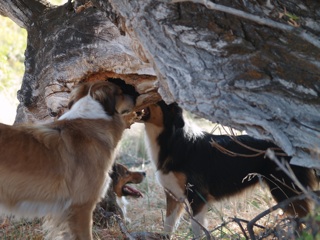 Everyone was having fun.  Notice Lucas’ intensity while the women hunt.  But I had to call an ending to the party.  I’ve always been labelled a party pooper anyway… but, jees, Elsa had a mouthful of wood chips and would hack and cough them out.  You think I want to take her to the vet AGAIN, and pay to have splinters removed?  Nuh uh.  Besides, what if the mystery critter went on the offensive?  Yeh, sorry, Doctor Steve, but we just HAD to see what was in that tree!  Please don’t charge me again…  With one regretful glance back at the tree, Elsa and Dally abandoned their wood shredding attack and joined Lucas and I on the walk back to the pickup.  What were we doing?  We were having FUN!
Find me here!