Last night the snow began right at dark… pellets that remind me of fertilizer!  Within minutes the snow was an inch deep and it slowly continued throughout the night.  By morning 5 inches of snow lay quietly on my world.  My furnace had quit on Saturday… and now, believe me, I missed it!  I always seem to be cold, and having no furnace in a partially insulated drafty old house with snow outside didn’t help!  Thankfully, Vernon is an early riser, and had built up the fire in the fireplace.  I LOVE my fireplace!  Uncle George built it a loooong time ago when he built/remodeled this house.  My house is actually two old mining camp houses joined together.  It is a rather amazing story, but hey, back to my fireplace…  It sets out into the living room, so all the heat that warms the rocks still radiates out into the living room long after the fire is out.  It is built with vents at the bottom and an opening below the mantel so cold air is sucked in at the bottom and heat escapes through the top.  I’ll have to write a blog just about my fireplace and show you pictures!

We actually had a plan for today…hauling some cows to the sale barn in Worland.  With this snow we weren’t in a hurry to leave, we believe in letting the roads melt off first!  I decided I needed to take a sample from Lucas in order to renew his therapy dog certification.  What kind of sample you ask???  Poop.  Dog poop.  Follow your dog around with an inside-out baggie and wait for some action.  Of course, I took my camera!  Don’t worry, I’m not sharing THAT picture, so get it out of your mind!  I planned to take pictures of the scenery and dogs while exercising Lucas.  Nothing like a good run through snow to get your bowels moving!  So, I’m sharing… of course, I’m sharing, that’s what this blog is all about!  Here’s the star of the show… 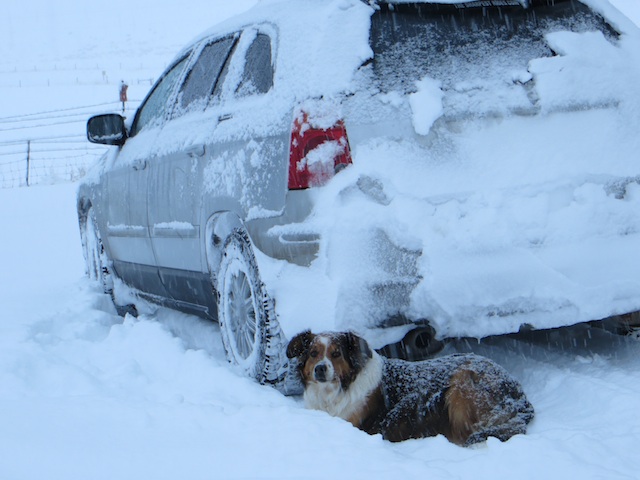 It is pretty hard to take a bad picture of Lucas… he may have his eyes closed or I may have it out of focus, but other than that he is definitely my Cover Boy!
Then Dally managed to pose for me as well…

I’m also gonna share a photo of Boomer.  The poor little ol’ Aussie that never gets any attention because the big bad English Shepherds always steal the show.  First of all in my defense, Boomer usually goes with Vernon.  Second of all, this hyper psychotic dog is rarely still enough to photograph, though he snuck in on the cover of the English Shepherd calendar this year because he blended in with the black calves!  (teehee)  Thirdly, taking pics of black dogs is tough duty.  But if you roll in the snow enough, you get these nice highlights in your black fur and I’ll take a picture of you! 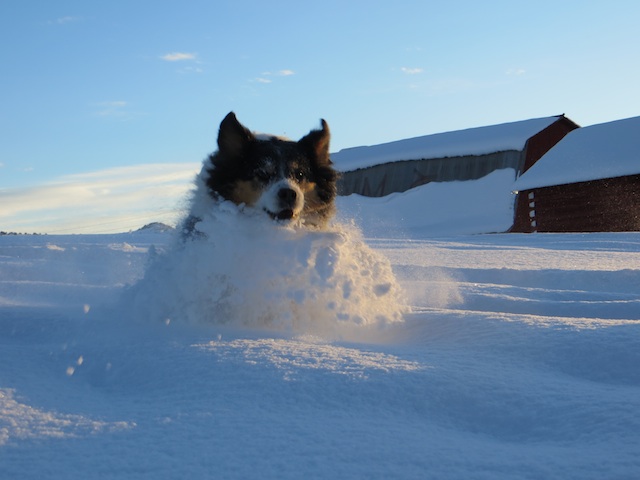 Elsa?  Well, she just didn’t have a good photography day… some days are just like that.
We did stop in to visit with our downed calf.  He was found the other day, lying downhill, which, for those of you who don’t know, can actually kill a cow.  They can’t get up with their hooves uphill and their own weight can crush their lungs and other innards. Innards.  When was the last time you said THAT word???  He should have recovered from that by now though, so he has some other problem that mystifies us and the vet.  He can’t stand up without help from the tractor/loader.  So at least once a day, they drive the tractor to the corral and lift him up and set him on his feet.  Hooves.  Whatever.  When I was there today, Johnny had just finished and so no photos of that… but he seemed content and was snacking on some hay and drinking some water.  I think he’s rather cute too.  Though not in a snuggly way like Dally.

As usual, the audience was nearby.

See what I mean?  Elsa was just not in the game today…
Walking back home…guess what?  Yup, Lucas was a good dog AS USUAL… and came through with what I’d been waiting for!  We took off for Worland on the horribly bad roads.  We’d have not gone if we’d known they were that bad… but we managed to get the cows to the sale barn, the poop to the vet, the books to the library, and pick up more floor samples for the Mills Place.  Just another day in the life way out here in the West!
Oh, and before I go… the OOPE photo that won in the vote  yesterday… was Johnny riding across the field.  The level one… This one…

Thank you all for your opinions… from here on I won’t reject any OOPE photo just because it is too correct in composition!  And from here on until the sun shines in the morning… I am going to go crawl under my buffalo robe and try and warm up, because this first snow is CCCCOOOOOLLLLDD!
Find me here!