I hope you all remember my cousin Robb… I choose to share his amazing adventures here because no one I know personally does this kind of stuff but my cous!  I love him!  He’s an amazing adventurer and pretty dog gone good photographer along the way!  Here’s his newest installment!  (ha… he’s an accountant when he’s in civilization, get it, Robb???) 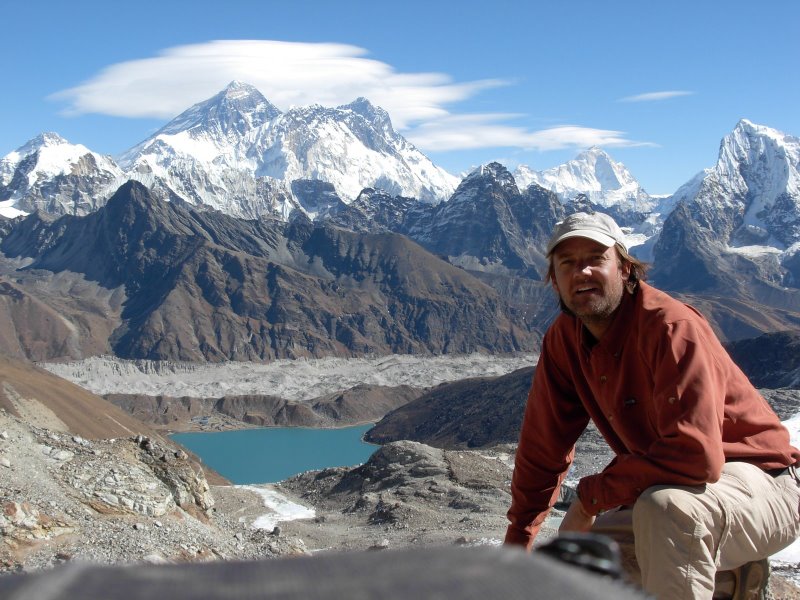 (Top of the pass – Renjo La)
Avalanches and Altitudes!
Well, finally…a story with a death-defying moment! Not that I have a death wish, but when telling others about me, even I tire quickly, so it should be good, no?
Over the last two months, I’ve been trekking over the Himalayas in Nepal. With nearly 40 days on the trail, I covered somewhere around 300 miles. I even lost 20 lbs (from 178 to 158lbs – even with the Yak steak, Yak butter, Yak milk, Yak cheese – Yak, Yak, Yak…)! Basically, of the 300 or more miles, about five steps of it were flat.
Climbing over five or six high passes (ranging from 16,500 to 18,500ft), everyday was filled with beauty, more climbing and adventure! On the Everest base camp trail, I spent over a week above 15,000 feet. For several of these days, the elevation held less than 50% of the oxygen available at sea level, which can affect the body in terrible ways (comparatively, I think most flights over about 14,000ft require oxygen or a pressurized cabin). Everyone is susceptible. 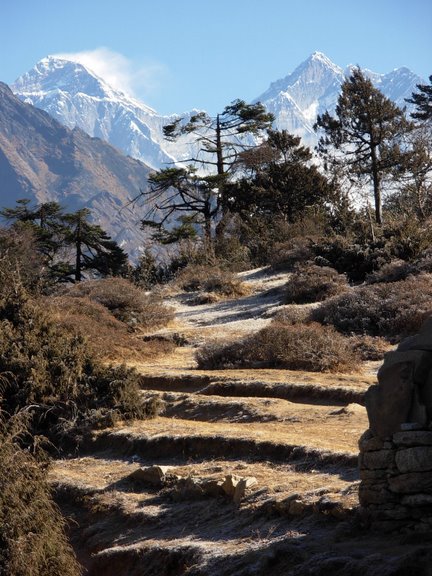 Everest (on left) atop Namche (Christmas Day)
Scary Moment #6: I was hiking at the base of Everest with Meli (a Swiss babe that climbs 6,000 meter peaks and races her own BMW at Nuremberg) when she literally passed out right in front of me while we were hiking. Unlike the cliché, she fell right on her face, cold as ice. Here we were at 18,000 feet (in the off-season), ten minutes from a wrecked Russian helicopter that tried to save others, days from any doctor, and your friend is unconscious in your arms….try figuring that one out!
Scary Moment #32: I was lucky most of the time; bad headaches and bloody noses were all I suffered. But I never figured out why I was peeing blood for a day – scary, I guess, when you are alone, the last person you passed was two days ago and you are days’ walking from the nearest medical facilities…
Scary Moment #14: I saw a porter on his hands and knees from altitude sickness – he had to be carried down.
Scary Moment #24: I saw four huge Chezk Republic guys carrying their girlfriend up over a high pass – not down. That’s how people dye – that and avalanches….
One of the most amazing visuals (and sounds) are avalanches, both rock and snow. While spending most of a day at the base of Everest, Meli and I saw a snow avalanche that covered over half of the Khumbu icefall. This is where the submitters hike (during May). It was nearly a quarter-mile wide and less than a mile away, so the noise and visual was incredible. I got a picture, but “you had to be there.” Being close to one is akin to feeling an earthquake.
As with many crazy adventures on the road, my trek to Telicho Lake was an easy decision – as every guidebook (and nearly every guide and porter) says “Don’t Go,” it’s too dangerous…. The trail, in many places, is no more than six-inches wide and pure rockslide – nothing more than mostly small rocks at the steepest angle possible with a tiny, so called trail in the middle – straight up 300 feet and straight down 500 to 600 feet. In many places, you can’t put your two feet side by side….scary as shit until you somehow forget the potential effect of every step (just more living proof that you can get used to ANYTHING). “Don’t Look Down!” you say to yourself….but you can’t look up from the trail either… It’s just steep enough that, especially with your pack, you probably can’t stop falling. It takes about 45 minutes to cross this area. It was one of the few times in my life where you have long enough exposure to fear that you can feel the ebb and flow of the adrenaline pumping in your system. 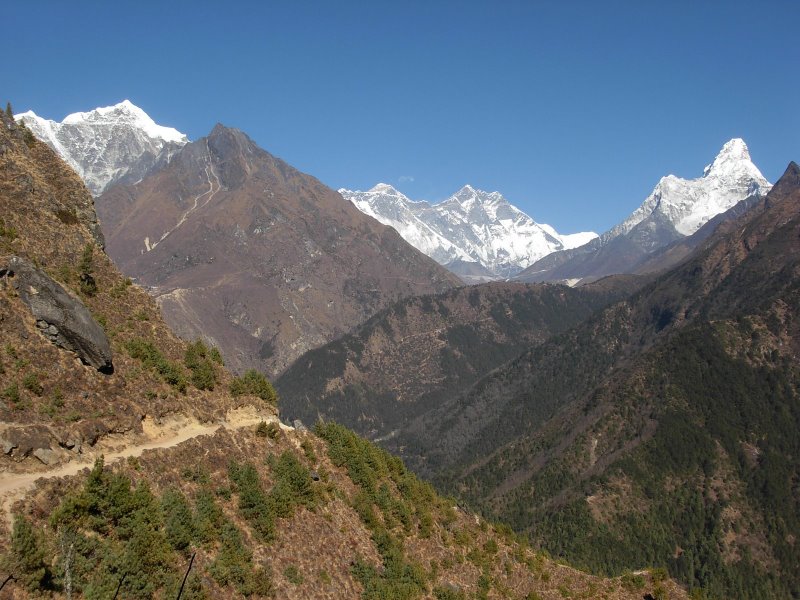 (Looking towards Tengboche, Everest, and Ama Dablam)
To reduce any questions of exaggeration…in speaking just a few days before with a Canadian doctor volunteering to help care for, and educate trekkers on high-altitude sickness in the village of Manang, you realize the possibilities: In only the three-weeks preceding my three-day side trip to the “highest” lake in the world, three people had died “trying” the same trail. A foreign guide was lost over the side (they spent a week searching – to no avail). Two weeks later, a Nepalese porter went over the side – unfortunately, the value of a local Nepalese to not enough to offset the expense of a search (the value of human life greatly diminishes outside our developed world). Finally, a Frenchman from an expedition was lost “in” Telicho lake. A picture of me in front of Telicho lake is right near where he fell – they found him after my picture was taken, so unknown to me at the time, he was still in the lake when I there. But it was easy to understand…nothing but ice sloping off 25 meters into the lake.
The day I hiked to the lake was beautiful – and for the first 20 minutes at the lake. But as with any summit, staying after noon is risky. In just a few seconds, the wind was so strong, we had to have at least both feet and one hand on the ground to remain in one place. A Swedish guy walked up behind me and we had to huddle down behind a rock just to catch our breaths. Needless to say, it was time to descend. On our way down to high camp, we had to cross some of the slide area I described above. The Swede was ahead of me about 10 meters when he saw the rocks sliding down very slowly above him. As we heard and saw the slide at the same time, I stopped where I was and he sped up. Fortunately, as the slide started very slowly, we were able to get to places where solid rock formed an outcropping above the trail. We were about 25 meters apart, resting a bit as the wind just got crazier. My fear was that the trail was filling with small rocks – and it didn’t take much rock to cover the trail. About the time we gathered our breath and wits, a gush of wind from above let loose. The rocks started to slide again, harder and faster. We both huddled under our rock outcroppings with our backpacks over our heads, as it just got worse. Within 60 seconds, the rocks were cascading over our heads like an earthen waterfall. The deafening noise and blinding dust – and especially the actuality of what was happening – was indescribable. It was a strange mix of extreme awareness and a surreal dream. I don’t remember how long it lasted. Most of my fearful experiences are similar – time doesn’t seem to exist. Even shortly after these types of events, we never seem to know how long they lasted: seconds and minutes are the same. After some time, as the rockslide and dust storm subsided, the Swede pulled out his camera and took a picture looking back at me, in both dust and sun, with my arms held to the sky – Pure Elation! Alive! Actually, maybe a bit too alive for most people’s taste….
Of course, only one look at the trail quelled any vision of it being over… In fact, getting across the now, non-existent trail after the landslide was the hardest part…shuffling inch by inch to find the small packed trail without sliding off the ledges. I took off my pack, made a trail, and then went back for my pack afterwards… At camp, we celebrated with a bottle of tatopani (hot water)! Another story alive to tell! 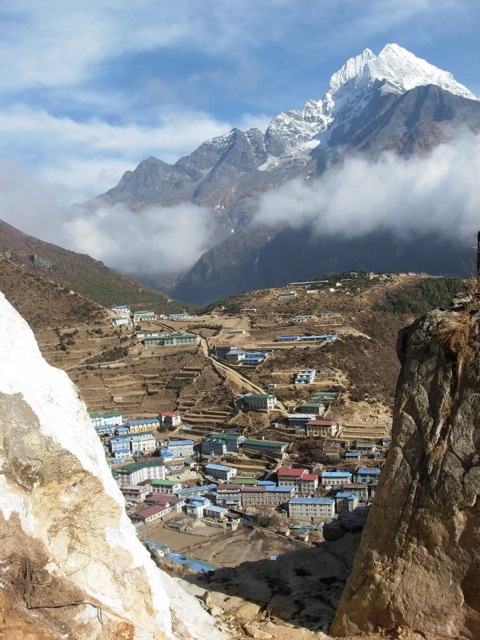 It’s been only two weeks now since flew back to Kathmandu from the Himalayas, but this part of the world is filled with continuous adventure and wonder: I swam with elephants, sat in front of the Dalai Lama during one of his teachings, stayed several days in a Chinese Buddhist temple with Monks and Nuns and been in a village where I was the only foreigner (and in a land where starring is normal). To be completely stared at by nearly every single person in a town for two days is worth a story all by itself. So who wants to join me! 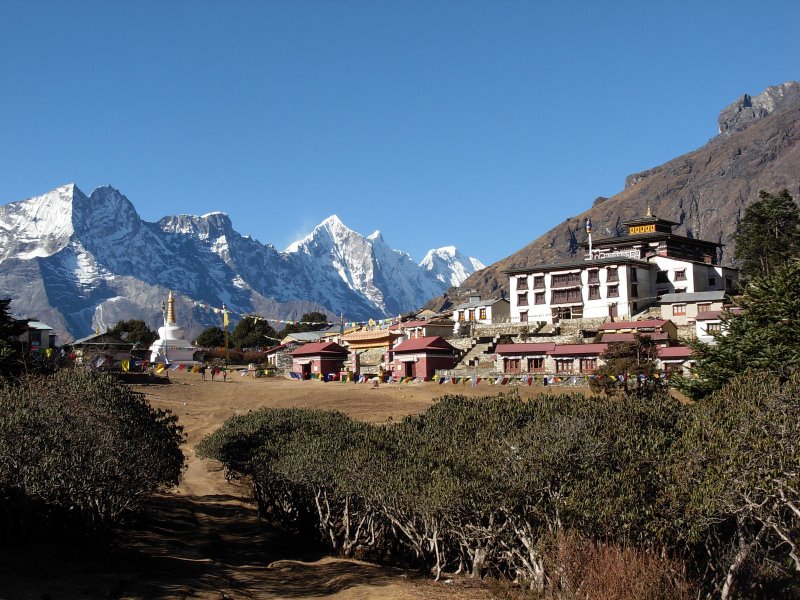 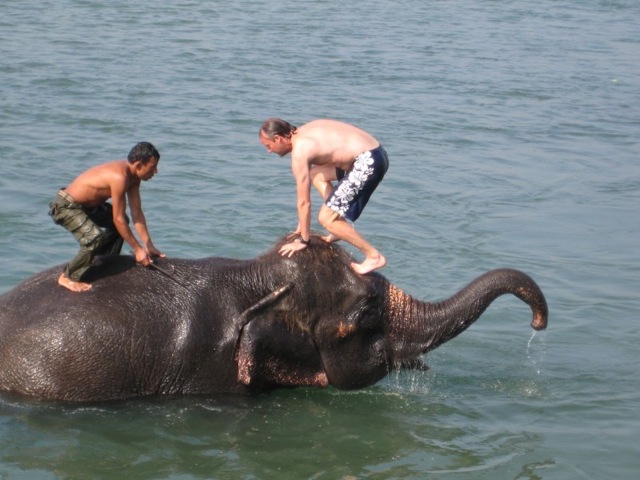