As of Tuesday, Elsa and her daughter Dally are both in heat.  Thus begins the “dog shuffle” where the girls are either in the kennel or in my kitchen/mud room or supervised outside.  Lucas is rotated to wherever they aren’t.  I hope to breed Elsa as it has been since November 2007 when she delivered her last litter.  Well, not me… Lucas will do that!
However, I have tried to set up an appointment with my vet for Elsa to get her hips tested since October.  In October I was sick.  In November my vet begged off due to his schedule preg testing.  In December he was still preg testing and I was busy with remodeling the Mills house and holidays.  I figured I had January to do it.  They weren’t supposed to come into heat until February!  Best laid plans…  Elsa’s OFA testing is scheduled for Tuesday, and my vet assures me all will be OK.
This will be Elsa’s 4th pregnancy.  She had two litters while she was owned by De Butcher in Oklahoma.  Unfortunately one litter was born in an ice storm and froze to death.  The other litter will benefit from the knowledge of her OFA score as will the litter she had in ’07.  I hope her score will help the English Shepherd community.  Should this disrupt her heat, I will be so sad!  I am looking forward to puppies in springtime and have had 6 inquiries about this litter that’s not even on the ground yet.  That’s not even counting the people I turned down last time or with no advertising.
Dally, on the other hand, is NOT going to get bred as she is just over a year old.  There are males I have in mind for her down the line… that is if I don’t get tired of not having her available to work 2 months of the year!  She could work around here this week, but it seems like anytime we have anything big going on, people bring their intact male dogs along to help!
But look at this… I mean, dog-gone, aren’t they cuter than cute???  And notice who is missing from this group shot… Yep, Dally.  How did that ever work out??? 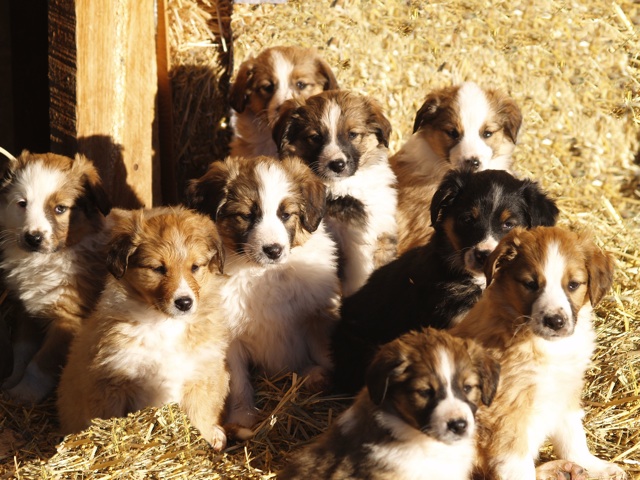