I introduced you to Wyoma yesterday.
I thought I’d share her story of coming to Ten Sleep and meeting her husband first.
She was a cracker!
See if you can get a feel for her character in this story… all spellings and writing style are hers…
“During the summer of 1928, our friends from Ten Sleep came to our house in Casper.  I and Mom had them in and they stayed over night.  Grace invited me to go to Ten Sleep with them and away I went and Hester and I packed a few clothes for me to take along as I was only going to be gone two weeks which ended up as a month.  Hester was 16 and I almost 26.  We stopped at the rodeo in Kaycee and Harry only had to pay for two grownups and two kids.  When we got to Ten Sleep the bed space for girls was one full size bed and a cot so we rotated. That way no one had to sleep in middle or on cot two nights in a row.  I took over the cooking house work and any thing that came that way.  Grace took in washings and Harry had a filling station down town.  The gasoline was in barrels and so was the oils.  Harry bought me a pair of big overalls they were a dollar a pair.  Grace came into the house one day and said Harry is bringing in company for dinner what do we have for this meal.  I said we are having beans and corn bread.  She says he won’t eat that but then I say dinner is over for that is all there is right now.  They ate cornbread and beans and enjoyed it.  In the middle of July Grace had more company from on top mountain above Bigtrails.  We had very little to eat that time to.  I sent one girl to chicken house to see if she could get an egg, and another to garden to get a few onions, and another to get in a bucket of milk.  No refrigerator so it was on north side of house under a box to keep dogs from it.  We had a few boiled potatoes.  I fried the onions and put the potatoes in and then what bread we had and then the egg and poured some milk over it and put a lid on for it to get steamed.  Grace made some biscuits while I did any thing else to get a meal.  These folks were Dad and Jim Pyle.  Mother Pyle had died the night before.  This was the 13th of July.  Jim’s sister and her son came from New York to the funeral.  After this was over a bunch of us went up the mountain to be with each other.  Jim’s cousin Mary was one of the crew.  She had to go back to her job by a certain day.  About ten o’clock the  night before we all go in Dutches car and left for Ten Sleep.  The car had no head lights.  So Dutch and Arthur took turns at riding the running board and fender to direct the driving.  We got headlights and patching material at Ten Sleep.  We only had 7 flats that night.  The tire pump was none too good.  My hands being the smallest I got  the job of holding them around the tube while the air went into the tire.  To end this happy occasion we ran over a skunk about a mile or so before getting into Ten Sleep.  We stretched out on the lawn and went to sleep.  We ate no breakfast.  Twas after this that Jim and I started going together.  We met on July 15 and on October 13 we were engaged, and on December the 23rd we were married.” 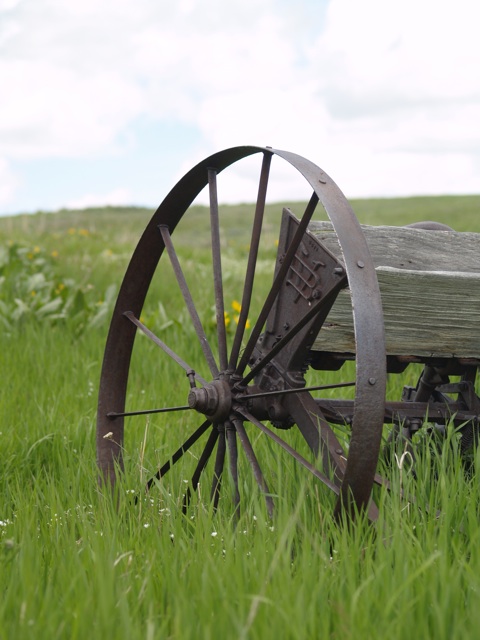