Today was one of those Gotta Do It Days, where you just have to complete those unwanted but necessary items of life.  That included a trip to Cody for a doctor visit, hopefully one of the last where the lingering effects of my blood clot, pulmonary embolisms, and coumadin treatment are discussed.  I’d just as soon leave all that behind, including the sore joints in my knuckles and knees I SWEAR coumadin gave me!

But since a 2 hour trip to the doctor’s office can be completed by going through Worland first, of course we did some ranch work along the way.
We had three bulls that needed to be sold.  Two were old… the other, uhm… well… let’s just call it ED and leave it at that!
As I’m getting ready, Vernon decided to load them in the horse trailer to save some time.
Soon, he returned, commenting that they were pretty wound and we should get on the road.  When a bull that weighs 2,000 pounds is cranky inside your horsetrailer, you want them out of there as fast as possible!  When there are three, it’s time to get your butt on the road!
Grabbing my coat, we were off.
It was snowing lightly, and the highway had a nice packed sheen of snow/ice.  The shifting weight of the bulls would bump the pickup one way, then the other.  I’d glance at Vernon.  He said nothing for quite a few miles.
Then in his typical delayed storytelling style he briefly touched on the story of Loading The Bulls.
One bull is snarkledy (four year old Victoria’s created term for cranky).  He evidently didn’t want to load into the trailer this morning and let Vernon know it.  This same bull put him on the corral fence a few weeks ago and proceeded to pound on his feet and ankles which was all, thankfully, the bull could reach.
So, Vernon gets on his four wheeler to help encourage them down the alleyway.
A ton of beef turned quickly and smashed into the front of his four wheeler… breaking a headlight and mashing in the front.  Vernon continued, getting them far enough down the alley to shut a lower gate.  Not willing to climb in the little pen, it took some encouragement to get them loaded, which he did eventually.
He then admitted thinking of getting our little excavator to encourage them more at one point.  I’m not sure how that would have worked, but I would have loved to have a camera had he had the opportunity to do it!  And I would have stood well out of the way because it IS a telephoto lens and you can’t be too close to the action, right?  Yeah, right!
************************************************************************
PUPPY PHOTO(S) OF THE DAY… How do you keep snarfing puppies from eating too fast?  Spread their food out on the porch! 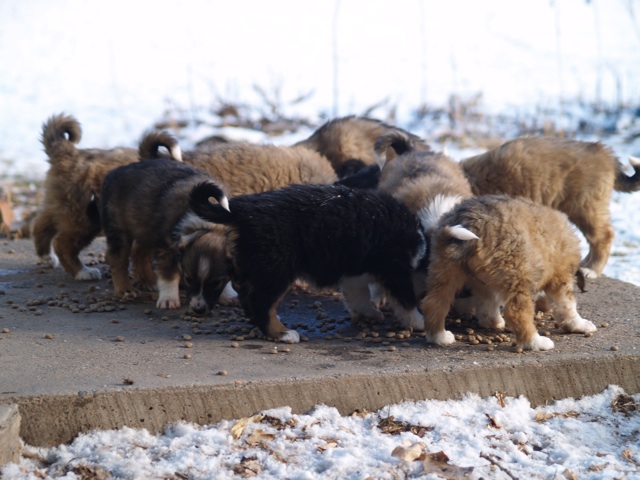 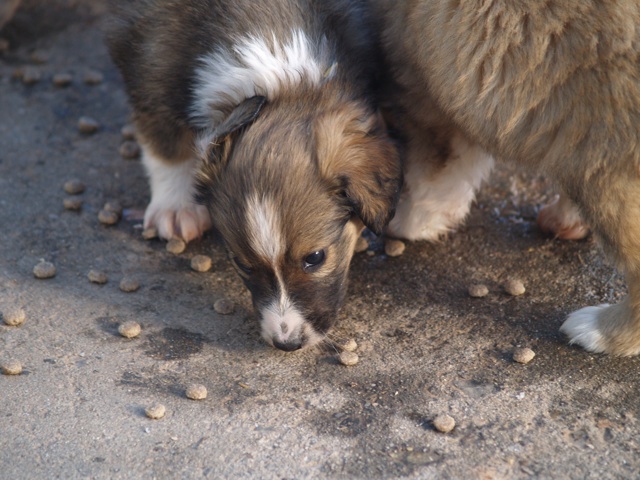