Our plan was to ride yesterday and today, kicking more pairs out to grass.  Since yesterday threatened rain and thunderstorms, we decided to move the bulls to their bull pasture just over a mile away.  I was mounted on Panama, the guys on their four-wheelers since it is road 90% of the way… I was just along for guarding those few places the bulls could have made their escape.

It began to rain and the wind began to blow and I believed we were in for it, but, nope.  The sky just turned back into a low depressing grey cloud and hovered.  Somewhere along the way, I grabbed my little camera out of my pocket and… nothing.  It tried to open its lens and couldn’t quite do it.  I tried often, putting it away when necessary and then trying again later.  Off.  On.  Off.  On.  Off.  On.  I was not very happy with it.
I had purchased it in January and here by April, it was unable to open.  I had thought the closing lens would be great for keeping dirt off the lens, protecting it.  Now it acted as if dirt or dust was clogging it up.  Believe me, though it’s ridden in my pocket, it hasn’t even met a Wyoming branding or two or three… It hasn’t ridden drag behind the herd when the fine silt dust clogs your eyes and lungs.  I’ve been thrilled with its lightness and compactness and zoom… but if it can’t take this… well, Panasonic, I’m very disappointed!
I spent some time on the phone with Panasonic and they’re asking me to return it… so I am.  <sigh>  No bull photos… No bull.  We’ll see how fast it’s repaired or replaced…
We turned our large bunch of cows from their pasture to the horse pasture around my house… and called it a day.
Today we woke to real rain and again, being the fairweather cowboys that we are, Vernon went to plowing… I went to painting.  I’m working on the upstairs spare bedroom, and I’m happy to report, the priming is done, next time will be REAL paint!
The creek is rising and falling and making us a tad nervous… it’s been a while since it flooded… but it’s gone down last I looked.  Here’s a glimpse of it from 3 days ago… definitely higher than normal!  And muddy.  We’re hoping the rain will just bring green grass, and not melt all the snow off of the tops of the mountain!
Tomorrow is cow work again… if we’re not called for rain. 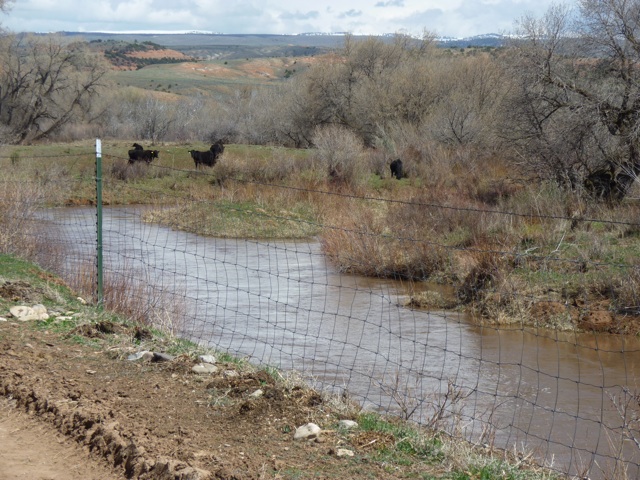