Please indulge me with one last wedding story…

Most weddings have something that goes “wrong”… at mine, my sister left Vernon’s ring behind… since it didn’t fit and needed resized… she thought we weren’t using it.  That was easily remedied since I was married at my parents’ house and the ring was just upstairs.
Victoria’s “mistake” was not actually at the wedding.
We had gone up the mountain and decorated first thing that morning.  It was a 45 minute drive from home and we needed a place closer to change into our good clothes and hopefully, take a shower!  Seven minutes away is Deer Haven Lodge. It used to be a popular place for tourists, hunters, and snowmobilers.  It fell into bad management, and ended up closed and in bad shape.  It was recently purchased by the folks that run South Fork Lodge closer to Buffalo, and they are working hard at restoring it and giving it a new life.
We had stopped in weeks ago… Could we have a place to freshen up?  All we wanted was a shower and electricity for our curling irons.  They assured us we could have a place… no problem… they wouldn’t even charge us.  They had hoped to have some cabins or their motel area finished, but it wasn’t *quite* done.  Honestly, we just want a shower and electricity.  We reminded them the night of the rehearsal dinner… which, by the way was EXCELLENT!
So the morning of the wedding at 10 am we run over to Deer Haven.  “Yeah… we can put you into the “Beaver” cabin.”  “No!” another girl shakes her head… “it doesn’t have any mirrors in it… They *need* mirrors!”  True.  We did.  We all wanted makeup on our faces… I never thought of requesting a place with mirrors.  Silly me.
“They could use the basement on the Ranch House.”  “No… the boys are over there still asleep!”  We look at each other.  Victoria’s eyes are getting bigger as time ticks by.  It took an hour to curl her hair the day before.  Photos are at noon.  Helloooooooo.  “I’ll go roust the boys out and you can go there… just give me a few minutes to wake them up.”
Heavens.   It’s almost 10:30… kick their butts out of bed! and please hurry!
They wave us over to a cabin obviously being revamped.  Well, most of their places were works in progress.  We grab backpacks and towels and head down.  M. and S. knock on the door and three 20 something boys answer with mussed up bed head and their boxers on!  They aren’t embarrassed to be faced with four females anxious to kick them out of their sleeping bags, but, gee… guys… get your jeans on and leave already!
The stove was sitting the middle of the kitchen and extension cords covered the table.  The boys had been asleep in the living area on couches and floor and the sweaty locker room smell was *not* overcome by the outdoor pine scent!
By this time Victoria is ready for a shower!  Her thick hair takes forever to dry and then she had to curl it!
As she heads for the shower, one of the guys admits “It’s kind of a cold shower… not much heat in it.”
I roll my eyes.
“Don’t you have a showerhouse here?”
“Oh, yeah… guess we should have mentioned that before.”
“How many stalls?”
“Two for guys and two for girls.  But if you lock the door you could have all four!”
“Does *it* have warm water?”
“Yup.”
I knock on the bathroom door.  “Toria, the showerhouse has warm water!”
“Too late, I’m already in!”
M. and S. head for the showerhouse.
Within a few minutes, I hear Toria… she’s out of the shower.  “Well, you might as well go jump in the creek outside, it’s the same temperature!”  She hadn’t washed her hair and I could hear a tinge of panic/I’m-not-gonna-panic in her voice.
“C’mon, we’re going to the showerhouse!”
Aunt C. stayed behind, and Toria and I left her to a sink bath.
I pounded on the girls’ side of the showerhouse.
“M.!  S.!  We need to come in!”
“OK!”
“Uh, girls, you need to unlock the door!”
M. and S. have been friends for a while… and shared the left stall.  Toria and I stripped and shared the right one.  It was a little closer bonding than we had anticipated.  Kind of like gym class.  As S. stated “This would be kinda weird if you weren’t who you are…”  No time for anything but a quick scrubbing and shampoo, and we were out of there!
Back to the Ranch House, and we all dressed quickly, and S. began working on Toria’s hair.  Toria wasn’t putting on the wedding dress until we got back to the wedding site as we didn’t think we could stuff her into the car with all the fluff in her skirt!
Soon M. was dressed and began working on S.’s hair as she worked on Toria’s.
All I could do was shake my head and try to lighten the mood…
Toria just seemed to keep an eye on her watch!
In 40 minutes her hair was done, S.’s was as well… and we grabbed our backpacks and headed out.
We would be 10 minutes late, but considering the experience, that was pretty good!
Sometime in the future, hopefully Victoria can laugh at our Showerhouse Experience… it sure makes me giggle! 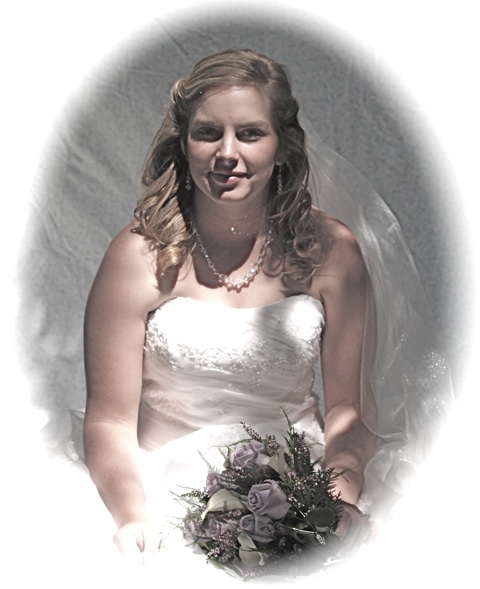