As this country was settled, dogs trotted alongside the pioneers.  Dogs that could warn of strangers, herd livestock, protect children, kill varmints, hunt, and lay on your feet on those cold winter nights in your drafty old soddy.  They were simple collies or shepherds… not the fancy show Rough Collies like Lassie.  They weren’t English, Australian, or Border Collies… not yet.  They shared the same history… were bred for these “farm collie” instincts… finally in the early 1900’s began the separation of “breeds”.

People wanted distinctive dogs.  Merles and bobtails became the hallmark of the Australian Shepherd.  Black and white Border Collies with the crouching “eye” stance to handle sheep were in demand in other areas.  The pointed nose and small eyes became Rough Collies, aka “Lassie”.
The “collies” that raised so many children of the Greatest Generation and their parents fell by the wayside.  They were considered “mutts” by other established groups.  Disdained for their lack of “eye”, or absence of merle color, these dogs quietly slid into small pockets where lines were bred by a few people who firmly remained fans of these dogs.  Look back in a family portrait and you’ll find these dogs. 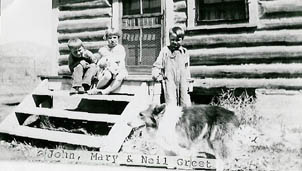 Finally, people demanded a name for this forgotten dog.
It became the English Shepherd.
Not held to a “show dog” standard that deforms a great dog (like the German Shepherd), or popularizes certain breeds (like Dalmations), English Shepherds are being bred for working ability, not looks.  ESs, as many of us refer to them <those of us that like to save time typing>, are sable and white, or black and white, or tri-colored, or black and tan.  They have prick ears or folded ones.  Weigh 80 pounds or 30.  Have bobtails or full sweeping tails with a little Dairy Queen swirl at the end.  Breeders have been few and far between.
One breeder became an English Shepherd hoarder.  The story was convoluted and sad and strange, but all emotions aside, one woman had over 200 animals at her place outside of Billings, Montana.  The county was finally able to step in.  The conditions of some of the dogs was appalling, but I’m not here to focus on the past.  The story is available online for those who want to read about it.  <read the links at this website on the left sidebar under Montana English Shepherd Mass Rescue> This major work was dubbed Operation New Beginnings.
When I went to the Montana English Shepherd Gathering yesterday, most of the dogs there were dogs from this animal hoarder.  Rehomed with the help of the National English Shepherd Rescue, they and their new families celebrated a year of living in a home with heat and running water and baths and toys and brushing and food every night… and LOVELOVELOVELOVE.
These dogs were better behaved than my dogs!  My dogs are encouraged to dislike strange dogs, and Lucas especially takes to this position, partly from his stud dog status.  Not popular in a setting like yesterday, but invaluable to us here on the ranch.  <Earlier this year when a neighbor’s two Border Collies got on the run… they came here.  My dogs discouraged any attempts at getting close to our calves in the field and corral.  Those same Border Collies ran up the road nine miles and killed sheep and alpacas.>
Elsa was friendly enough on her own… I dropped her leash and she went investigating on her own like many of the ONB dogs did.
Dally has a bubble and other dogs are OK if they stay out of it.
Lucas was growling, snarling, I’m-gonna-eat-you, Mr. UN-Congeniality.
The ONB dogs, other ESs, and other breeds there were happy, many running off leash.
There were dogs trying out the agility course.
Dogs with their kids.
Dogs in the swimming pool cooling down.
Dogs hiking.
Dogs hanging out in the shade.
Dogs saying “Hello… please drop me a piece of that hamburger!”
We learned the basics of Dog First Aid, Canine Good Citizenship, dog agility, Search and Rescue, and T Touch for Dogs.
We discussed the English Shepherd Club, the Registry, and the unique MDR1 gene (aka the “collie” gene) that can make many shepherds susceptible to certain drugs… from making them sick to killing them.
We enjoyed ourselves and Our Breed…
All…
FOR THE LOVE OF A DOG.