As usual, you guys were exceedingly nice about my momentary lapse of confidence!  I think this happens every fall… must be the lack of sunlight or something…  But, sincerely, thanks for the encouragement from everyone!

I’m doing better… 81 readers yesterday!
I don’t know how you are counted… I spend too much time trying to figure things out I *must* use… and I tend to ignore the things that would probably bring in more readership!  I was told a few weeks ago to ask “Who do you want to read your blog?” and target *that* audience.  I think I instantly had a glaze over my eyes and a slack jaw.
“Who do I want to read my blog?”
Like… everyone.
Duh.
People who live in big cities and can’t see the views I can.
People who used to live in Wyoming and tear up at my photos.
People who love dogs… now *there’s* an audience!
People who loved Roy Rogers and Bonanza, Monte Walsh and Quigley Down Under and Crossfire Trail, Open Range and Lonesome Dove.
People who played “Cowboys and Indians” as a kid.
People who yearn for their own little piece of country.
People who enjoy photography and handiwork.
Just… people.
That’s the part of this “blog game” I don’t get.  Self-promotion.  Blech.  I was taught to act differently!  You *don’t* brag.  You *don’t* talk only about yourself.  Being *humble* is a good thing!  Remember “Pride Goeth Before a Fall”?
How about
“The Girl Scout Law

I will do my best to be
honest and fair,
friendly and helpful,
considerate and caring,
courageous and strong, and
responsible for what I say and do,
and to
respect myself and others,
respect authority,
use resources wisely,
make the world a better place, and
be a sister to every Girl Scout.”

This is about the third or fourth LAW incarnation since I began my career as a Scout in 1965(?) (really? gasp! that was a LONG time ago!) but I believed this phrase then… and still do.  It doesn’t say “Promote yourself!”

Sometimes I brag.  But I feel guilty when I do!  And I even have something to brag about.  Now I don’t want to share because I just spent 15 minutes typing out how I hate to do that.

I’d rather just stick with making the world a better place!

With that in mind, today I improved MY world just a little bit…

The Mills Place almost has a *real* bathroom!

Down went the vinyl floor… in went the light fixture, mirror cabinet, vanity, and toilet!

Look how everything MATCHES!

That just AMAZES me!

I buy things at different places, months apart… and somehow I have just lucked out! 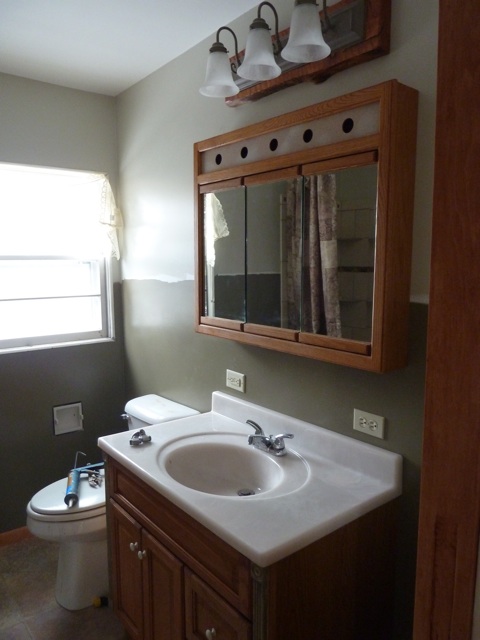 There was a big trick here.  We drywalled a long time ago… and kinda forgot how everything was wired… and where the studs were… and what we exactly had planned when we left this project last spring.  But the guys figured it out… eventually! 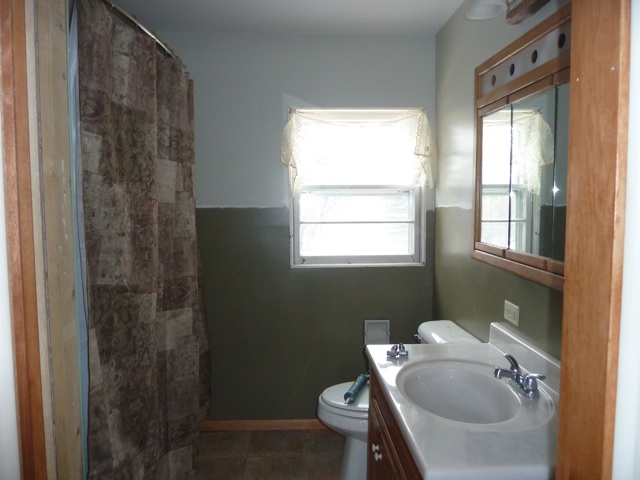 Yes, there’s more to completing it…
I have to seal my grout and caulk the shower.  Fix/paint the window (I just threw that little lace curtain up there for kicks and giggles!).  Decide if my “fossil chair rail” is going to work and do that.  Glue fossils on my mirror where the old lights once were. Build the linen cabinet.  Trim out the pocket door.  Touch up the paint.
I kept trying to do a little <happydance> but Vernon would quickly move onto another project and I’d be running around gathering supplies or cleaning up from the last mess or nailing/sanding/staining.
My new stove has been backordered, so I get to fight with my old one for Thanksgiving.  But by Christmas?  I can’t wait to see what the next month will hold!
We also made a mad dash to Worland for plumbing parts… and I spoke with my print shop guy… who assures me my Red Dirt In My Soul 2011 calendar is *almost* ready!  Back to the self-promotion thing here…  It is just easier to tell those of you who have pre-ordered… it *IS* coming, I promise!
****
November 16, 2009   Meet “Pate”
November 16, 2008   Old Girl
Find me here!