It’s true.
January 20, 2008, I began this blog!
After following some blogs out there… and having people question me about my life through my Rimrock English Shepherds website… I hemmed and hawed and bit my fingernails and kicked some dirt and stuck my hands in my pockets.
“Yeah, OK.  I can do this.”
After a cup of coffee with Daily Coyote, who has never been anything but supportive… a few questions about hosts through some friends online… and I was off!
Though sporadic through the first months… until Daily Coyote told me to be dedicated to my readership… I, slowly… *painfully* slowly… gained readers.
I knew nothing.  I struggled with the template… and photo size… and font size… and the overall look.  I had a steep learning curve, but I did it.
I wrote the way I talk…
With lots of dotdotdot…
I must pause a great deal in my speech!
Occasionally I’d play with REAL WRITING and try out something like this.  But for the most part, I’m just writing/talking like I’m on the phone with a friend who doesn’t interrupt!
I’ve included 2,729 photos in this blog so far.  I have 43 videos on vimeo.com… the most watched was the one with the English Shepherd Rescue Gathering in Montana, closely followed by Lucas’ Therapy Dog video.  My most popular post was the one on Exertional Rhabdomyolysis. It has been easy to see whenever Shreve mentioned me in her Daily Coyote, as my hits would skyrocket for a day or two! but I’m still waiting to break that 15,000 hits in a month ceiling…
People found it difficult to find me.  My blog was attached to Rimrock English Shepherds, and unless you were looking for a stockdog, I was hiding in the shadows.  After years of writing, I began a search for a new name.
Friends from New Zealand helped me with that… tossing around names… Wyoming, cowboy, ranch, west, ranchwife, anything “western” was fair game.
But my little children’s book… written for my boys years ago… and a focus for our then upcoming centennial in 2009… kept singing in my ear.  There was nothing in the title that would lead people to me.  Finally it sank in… the most popular blogs out there, they rarely have anything to do with their titles either!
Dooce?  Whatever that is.  The Pioneer Woman?  Give me a break, she’s hardly pioneer in the western sense of the word… OK… Daily Coyote… yeah!  Shreve has done Daily Coyote with the Midas touch.  But Shreve had read Red Dirt In My Soul and had a lot to do with me finishing it and selfpublishing it for the Centennial Party and *she* liked the name!
So here I am, January 20, 2011 and I’m still writing.  Now I’m Red Dirt In My Soul.  I’m on Facebook as RDimS!  I have a calendar to sell with my book.  I’ve come a long way.
I have more ideas to come as well… I need to finish the “how I met Vernon story”, my dog training ideas are melding, and I’m thinking I’ll occasionally start vlogging…
I’m still chatting about ranchlife and cattle and dogs and kids and wildlife and photography and all my various projects!  Through my periods of self-doubt and my absence during the illness and passing of my mother, you… my readers… have hung in there with me.  I need to thank you for that.  Without your comments and your support I would have quit long ago.  While it’s nice to be chatting with a friend who doesn’t interrupt… I LOVE it when you talk back to me!  This interaction with people worldwide is amazing… It’s easily the best part about blogging. 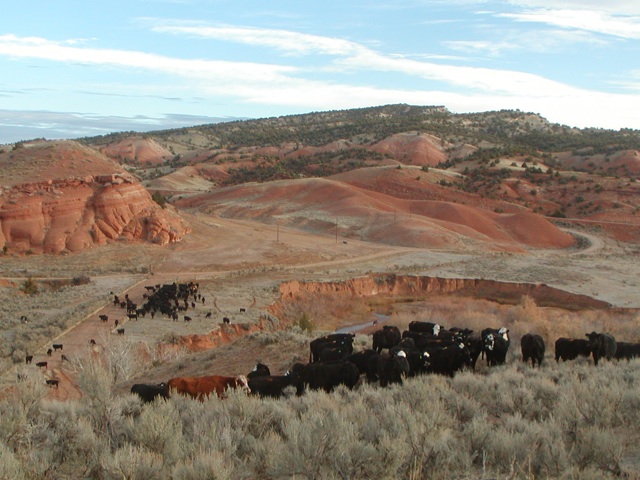