Well, while my rhubarb cobbler is bubbling away, I’ll say a few words…

Time is tight with the branding set for tomorrow.
I flew to town this morning and bought groceries, returning after lunch and I’ve been cooking ever since!  Of course, this year I’ve had lots of help, Brandon’s girlfriend M. has sliced, diced, mixed, and washed right alongside me.  Toria helped when they finished riding and supper was over.  With the three of us bumping into each other in my kitchen, we still managed to accomplish a great menu.
French dip sandwiches.  Green salad.  Potato salad.  Orange jello salad.  Sliced melons.  Veggie tray.  Chips.  Deviled eggs.  Rice Krispy treats.  A double batch of monster cookies.  Peach cobbler.  Rhubarb cobbler.  Ice cream.  Drinks.
I scratched brownies off my list.  People will just have to suffer without them.
It’s 10:30, and branding starts bright and early…
So, no, I’m going to disappoint everyone and NOT post puppy pics right now.  It takes a while to load 9 pictures and I’m just not going there.
Take it from me, they’re HUGE.
They growl and bark and make little “tribble” noises.  If they were fluffier, they would qualify as tribbles.  They can scoot about like tribbles.  Sometimes they lose their balance and roll around upside down like tribbles, though telling a tribble’s up from down seems to be tricky. 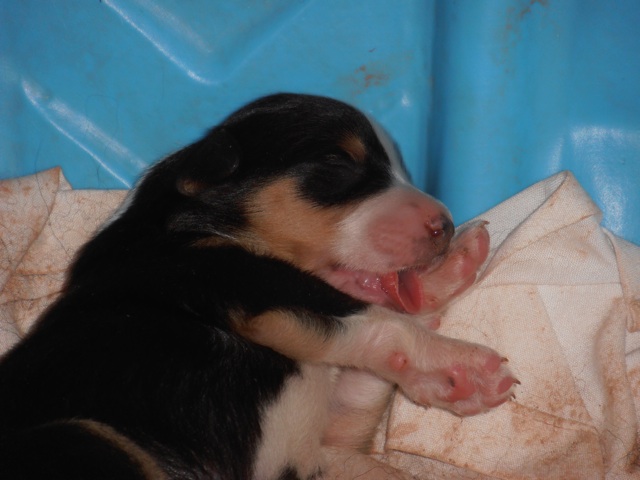 This little gal was sleeping right along with her tongue curled like this… How many of *YOU* have the genetic ability to do this?
I chose this picture just because I may end up sleeping like this tonight myself… Nothing like being pooped at the end of the day to make you sleep well!
****
June 3, 2010   So Many Photos, So Little Time
June 3, 2009   Wordless Wednesday – “Working Girl in Profile”
June 3, 2008   Whew…
Find me here!