The eighteen wheels rolled over the red dirt, hauling its small load to the sale barn.

Calves were separated from their mothers temporarily… keeping them safe from being stepped on was better than a few hours of pitiful loneliness.

The voices left behind in the empty corral were cleared again… and again.

A glance to the side, or down to the red dirt hid the watering that a few eyes held, for this was no simple sale of old cows.

This was the end of an era.

The Y8 brand has been on many a cow in its existence.

What left today in that rumbling semi was the last of the Y8 herd.  Old cows, beginning to lose their teeth, but still viable, most with calves at side… it was the owner’s age and health that had played a part in this decision.

“Sure hate to see ’em go… but if you can’t take care of ’em anymore…” the voice trailed off.  It was a heart wrenching decision.

It seems easy on paper, or to an outsider, but these are cows you’ve calved yourself, moved to good grass, vaccinated, hovered over during birth, and branded her calves these past years.  They’ve done good by you, and you by them.  This has been a successful symbiotic relationship.

But now, age, health, and lack of family to carry it into the future forces the decision to move on without the old girls.

When cancer took the cows’ owner, the Y8’s were tended by his younger brother, and some were leased to us for a few years.  They served us well.

The brother still has some of his own cows… but his older brother’s Y8’s will never walk through red dirt again.  The blue eartags are gone.  The Y8 painted on the barn roof is faded and worn.  “She’s a Y8, send her that way,” will never be shouted at the sorting grounds again.

It’s the end of an era, an era that will be missed, at least here at Big Trails, Wyoming. 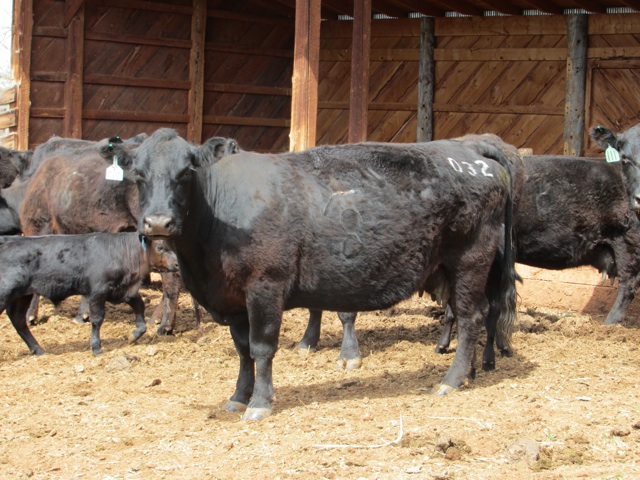 (This old girl, age 12, due to calve soon, poses like the grand matriarch she is!)

*For every farmer or rancher under the age of 25, there are four who are over 75.
*Inheritance taxes often force young ranchers to sell most of the ranch to pay the taxes.
*It is prohibitively expensive to get into the ranching business for young people who have not inherited anything but the work ethic and desire to be on the land.
*Most small ranches get bought for “vacation retreats” or “hunting leases” and are often subdivided, ending their true vocation of *ranching*.
*Agriculture was recently listed as the Number 1 most useless college degree on some blog posting.  Most likely by someone with a full stomach.
*Regulations, taxes, and lawsuits are all adding to the burden of the farming and ranching community.
*Should you care?  Only if you eat anything you don’t grow yourself.