We moved 70 or so pairs a couple of miles today.  It was warm on the mountain, though we all came prepared with jackets or sweatshirts… never quite trusting that it won’t be cold and breezy!

Lucas really wanted to come, but I think it would have been just a smidge too much.  We thought it would take most of the day, and we got a late start as it was!  I chose Dally again… to Elsa’s dismay.  Elsa will just have to go NEXT time! 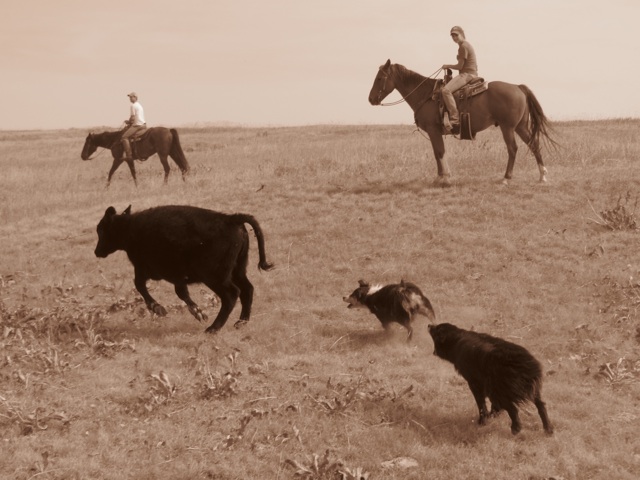 (Dally and Boomer tag team a slow calf, as Megan looks on.)

We gathered the Pyle Pasture, but the guys left Megan and I as they rode adjoining pastures, checking for our strays.  Megan and I had heard the guys talking about a different gate, but since we had no clue what they were talking about, we just headed the bunch along our normal route!

Luckily Brandon showed up to confirm we had, indeed, made the right decision!  Yay!

We paired our 62 through the gate, stuck in 10 more Vernon found, made a jog to gather 4, and saw the one Daniel discovered!  With that kind of teamwork, we were finished much earlier than expected!

I love that when it happens…