I probably messed up…

It was a warmish day, in the thirties, with sunshine for the first bit.  I decided I was going to prime my ceiling boards for the studio, even if it wasn’t 50º.

I hauled out a heater, turned it on, and felt it start kicking out heat.

I then went to painting… shifting the 4′ x 8′ sheets around and rolling on the primer.

I was kind of rushing, with hopes of making it to the girls’ basketball game this afternoon.

Until I finished, I never checked on the heater again.   Shoot.  I was warm enough.  Surely the heater would kick it up a few degrees in the studio and I could feel positive about painting when it was a bit on the cool side.

Knowing I was going to be late, but wanting it to stay warm, I had planned on leaving the heater on until I returned from the game.  I double checked to see if it was far enough from anything flammable.

There was no heat!  For some reason, it had kicked off and no matter what I did, I couldn’t get it to run.

Who knows what will happen now.

If my primer doesn’t ever set up, I’ll have learned a lesson… but I hate not working on my studio!

I abandoned ship and went to the girls’ game, which we won by one!

My first project of the day may be a failure, but my night time craft is a success!  This evening, I continued to stitch the Christmas stockings together… and realized I hadn’t probably showed you all of them.  So here they are!

I’m having more and more fun with needle felting! 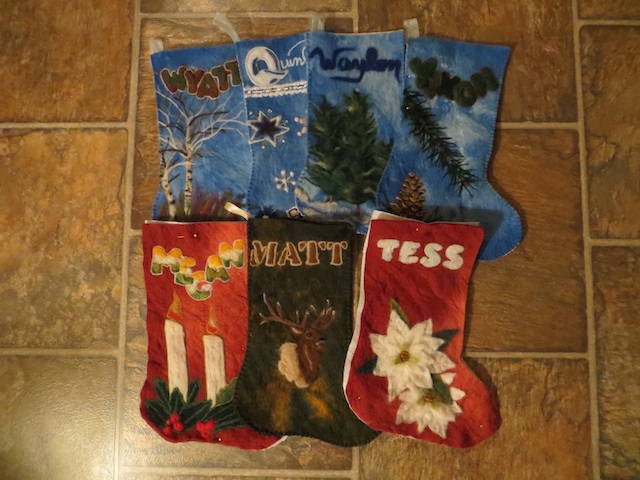