Happy Mother’s Day!  I really meant to drag out an old photo of me and my mom… and just realized that as I sat down here to type away.  That’s typical.  Seems like I was late more than once with her Mother’s Day present!  So, Mom, here’s a SALUTE to you… I miss you daily!

Yesterday… did you miss it?  You did if you just scanned my post.

MY BEES SWARMED YESTERDAY.  Which means they left my hive.  They landed in a gate post in my yard and the queen proceeded downward.  How the hell do you get bees out of a metal pipe?  You make it unappealing.  I tried to lift them out using a long piece of aluminum tipped into an “L” shape, and though I did it EXTREMELY SLOWLY… I was worried I’d smash the queen.  I thought about heating the pipe, but I didn’t want to cook them, just make it unfavorable as a hive.  Then I was going to lure them into a piece of old comb donated by a neighbor.  I lowered it deep into the pipe and left it overnight.  What it did was chase them out… and I should have just grabbed them and dumped them back in my hive and locked them in for a few days!  I should have just said BAD BEES!  and grounded them!  But I didn’t.  I hung the comb next to them, hoping the queen would adopt it as her home.  The workers were starting to cover the combs and I really thought it was going to work!  My neighbors came by, the ones that gave me the old comb, and they were at a loss as they’d never had a hive swarm.  GREAT.

So?  We talked and hemmed and hawed and looked and discussed.  By now, it’s late morning and they were getting more active.  Still not bad… I could have sprayed them with water and calmed them a bit… and then the neighbors wanted to look at Daniel’s “baby” bulls.  So, with a moment’s hesitation… (why do I never agree with my first impulse, which was to stay with the hive?).  Twenty minutes later we went back to the house… to Nothing.

MY SWARM HAD SWARMED AGAIN.

This time I have no idea which way they went.

The carpenter was working on my roof and he didn’t see them… but sometimes he’s very focused on what he’s doing.  They didn’t fly past the barn because we didn’t see them… so my first impulse is to say they flew back towards the creek, but they, honestly, could be anywhere.  They’re gone.

I SHOULD HAVE SWEPT THEM INTO MY HIVE WHEN I HAD THE CHANCE.

I’m holding out hope that we’ll spy them somewhere and I can recapture them… but… POOEY.

And my favorite chicken died.

Is this a sad country song or what??? 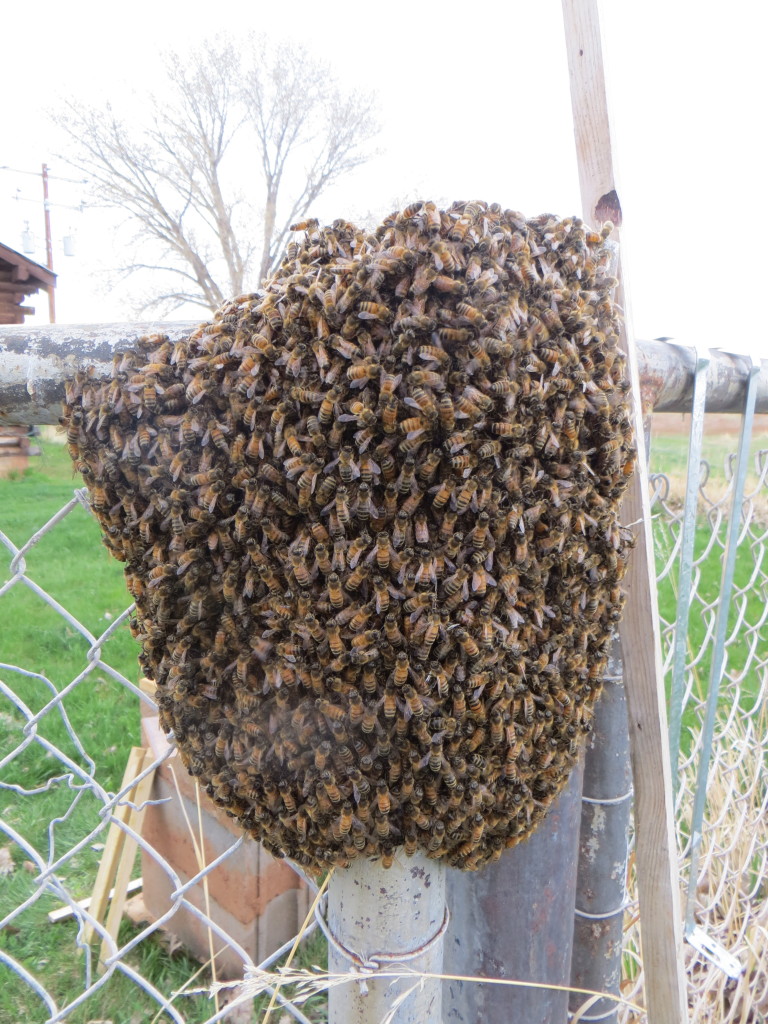