We are in the midst of haying season here, although temporarily slowed by equipment problems.

With my monthly Questions and Answer Session coming up… I’ve actually been thinking about some topics that no one ever seems to ask questions about.

Then it hit me… maybe I should give a short report on something you may know nothing about… and maybe it will encourage *more* questions (or send you running far from Red Dirt!)  Or maybe I’m just satisfying my latent teacher instincts!

So… here’s Ten Things You Don’t Know About Alfalfa.

1.  We grow alfalfa hay for the most part, some fields are alfalfa/grass mixes, one has just grass, and sometimes, if we cut the oats early, it will become oat hay.  The definition of hay is a green plant, cut, dried, and baled or stacked for use as animal feed.

2.  Alfalfa is known as Lucerne in other parts of the world.  Which may help explain the name of Lucerne, Wyoming… I always meant to look up how it got its name…

4.  Alfalfa is a member of the pea family.  Like all peas, alfalfa fixes nitrogen from the air into the soil.  It improves the soil!

6.  Alfalfa has purple flowers, which, for us, is a sign of Time To Cut That Field.

7.  Alfalfa is also eaten by humans… alfalfa sprouts are high in Vitamin K, and it also has Vitamin B, C, D, and E! 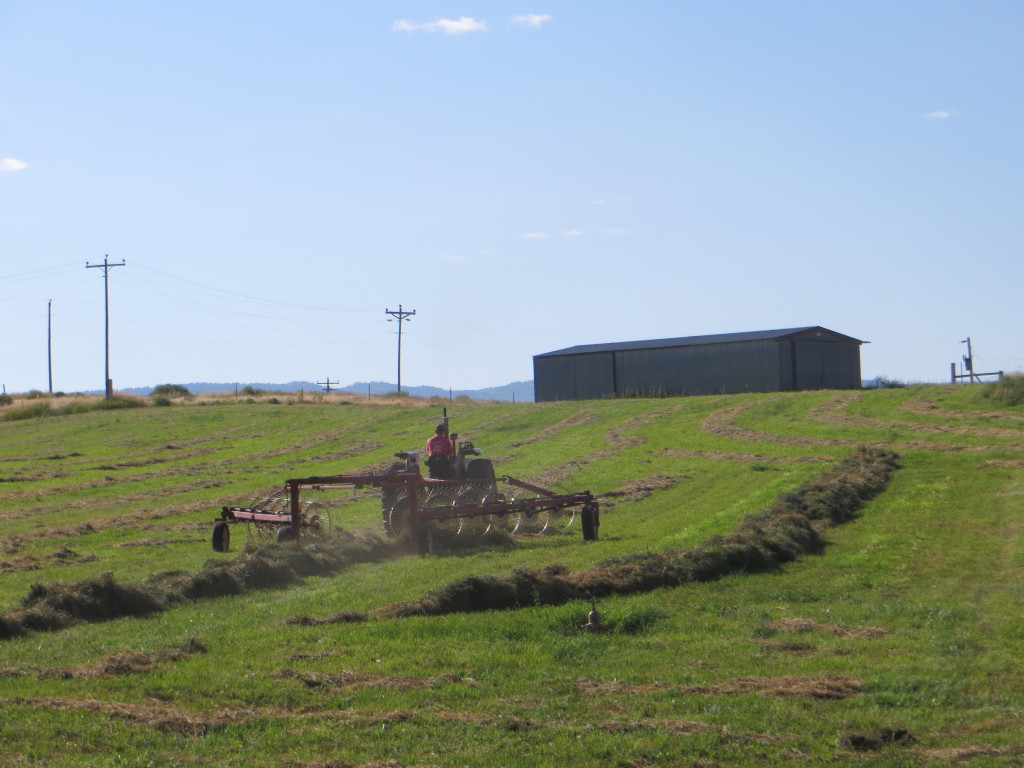 Alfalfa seeds don’t like to grow in established stands of alfalfa… so it is usually planted with a cover crop of grain.  The grain is harvested leaving the little alfalfa plants to continue growing and establishing a new field.

9.  Rain on your fresh cut hay lowers its quality.  Raking hay, which is what Brandon is doing in the photo above, does three things.  It helps the hay dry.  It throws together two windrows so the baler can make fewer passes (helpful if there isn’t much hay on the field).  It knocks off some of the leaves, which is bad, but poorer hay is better than no hay.

10.  “Making hay while the sun shines.”  Heard that all your life, right?  Meaning do an action while the conditions are right… Hay, especially heavy, nice, alfalfa hay, needs lots of sunshine and warm days to cure the leaves and stems into the high protein feed we need to give our cattle in our cold Wyoming winters!

10 thoughts on “Ten Things You Don’t Know About: Alfalfa”