Dally came in heat and was standing last Sunday.  Last time she had pups was in 2012 when she was bred to Bubba, a big, dark sable from Shoshoni, Wyoming.  Then there was the trip last year to Idaho, where Tank, inexperienced gentleman that he was, refused to breed her although she flirted as much as possible.  I hadn’t prepared for anything for this heat… a combination of lack of desire to drive for hours and hours, procrastination, laziness… but, I *HAD* decided if she didn’t get bred this time, I would spay her and her breeding life would be over.  Some of this was because of her age, which is 8!, and part of it was to cut down on any future bitch fights with Eden.  Dally had sent Elsa to the vet… If she could catch Eden, I’m sure she could beat her up.  Eden is much smaller!  I honestly flirted with line breeding her with Lucas.  Many breeders do this… and a little Lucas????  Oh, yes!  But when it came right down to it, no, I couldn’t do it.

So there I was… and I called Steve Weber at Deep Creek English Shepherds.  Bubba has passed on, poor ol’ guy… and I thought Steve had kept a pup out of him.  Steve’s sister had, but he had died last summer in a freak accident.  Steve now has Patches.  Patches is from Heidtman’s in Michigan… I checked into pedigree and testing and talked to Steve.  The thing is, Patches just turned one year old.  He’s got cow in him, though Steve has just used him in little bits and pieces, waiting for him to grow up… but, if I wanted to bring Dally down and check him out… sure.

Shoshoni is two hours away, most of it on gravel road for me.  It was a congested road, I actually met three other vehicles before I hit the highway to Shoshoni!!! Then, there he was. 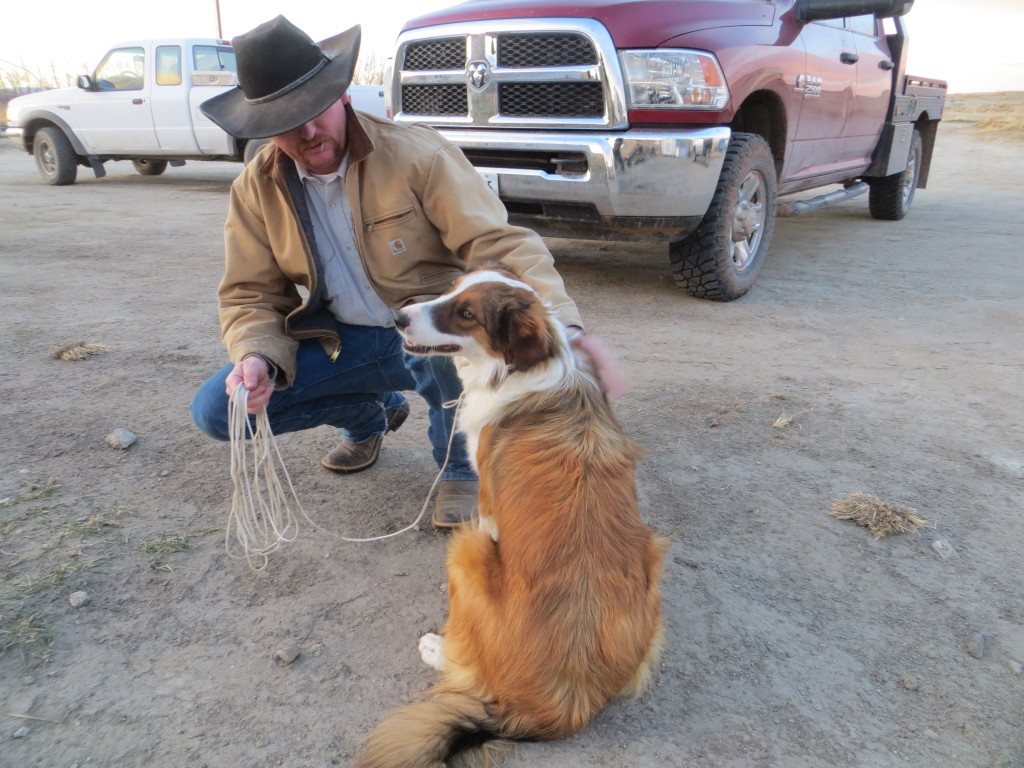 What a good looker! 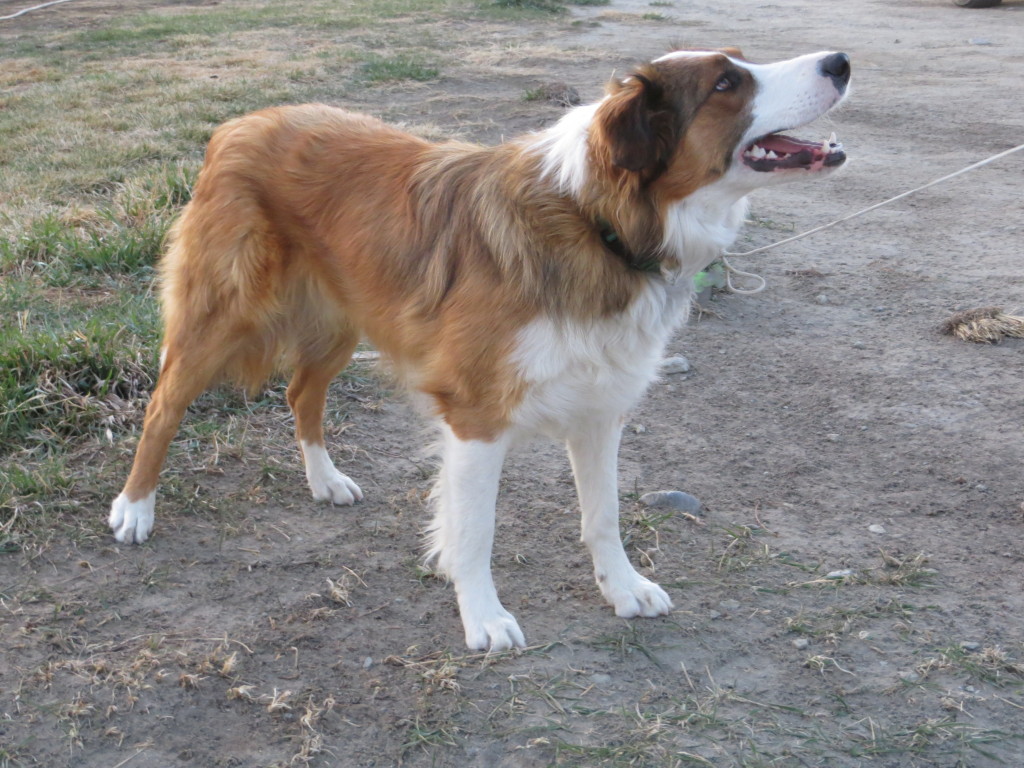 He will darken with age, like Lucas has.  He’s smaller than Lucas, though as a youngster, he’ll fill out more.  He’s cautious with strangers, but was willing to sniff around and check us out, but, you know, someone else smelled better than we did!  After confirming that I liked him, that he wasn’t deformed or ugly(!), I let Dally out.  She snarked once and then the flirting began.

I quickly shut the tailgate of my Durango, not necessarily wanting it to uphold its nickname of the “Love Machine” from our trip to Nebraska!

Well, we waited and watched and talked cows and moisture and jobs and fire fighting and bulls and cows and kids and dogs… seriously, Patches… 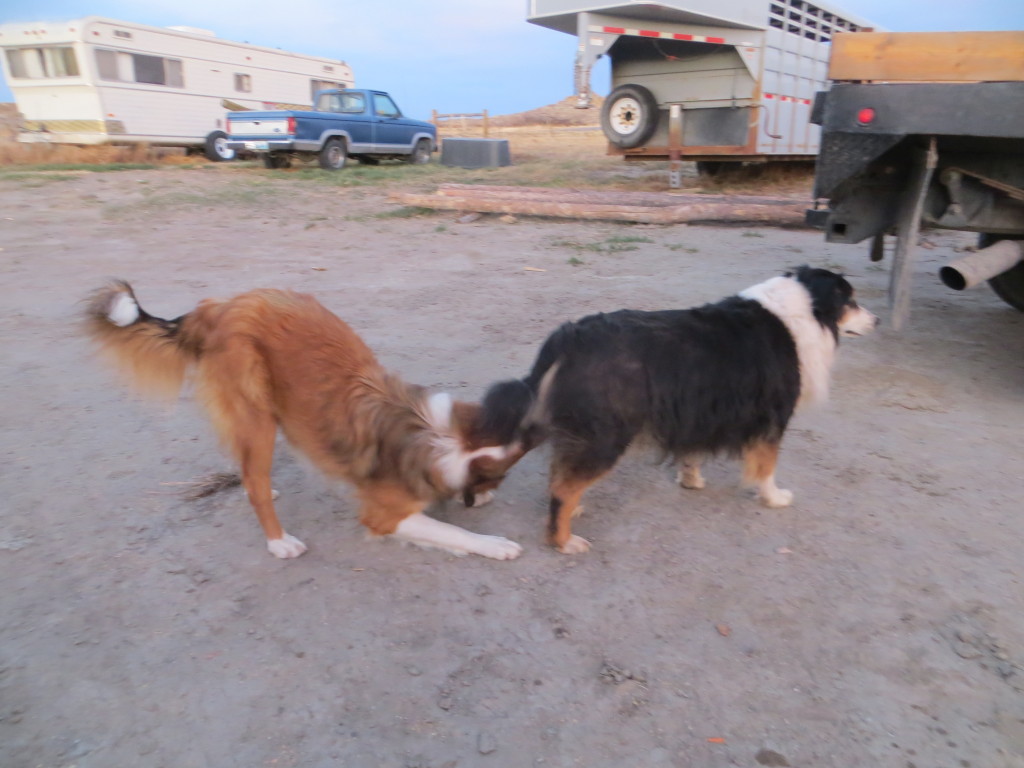 Get with it, kid!

Nope.  Just like Tank in Idaho, Patches wasn’t quite ready.  Or he was a gentleman.  Or plain ignorant.  Or maybe Dally isn’t his type.  We waited til dark, then decided we’d let them rendezvous in the horse trailer overnight.  It was deluxe accommodations, really, clean floor, hay to lay on, a bucket of cool water…  We went home, and I drove back down the next day to pick her up.

There were no witnesses.  If the romance of the horse trailer worked, we’ll find out in 6 weeks, with puppies arriving just shy of 8 weeks.  I hope so… poor Dally will have a complex that the young studs just don’t want to do it with an old fat girl… even if she has looks and brains!

6 thoughts on “Romance of the Horse Trailer”