There’s wildflowers out.  A few yellow bells, some white phlox, and by my garage, even some dandelions.  Yippee!  I know I didn’t use to cheer dandelions, but I do now.  In February, my bees were happy.  In March, they were humming right along.  I went to check them last week…

My sad heart turned to anger when I figured out why… mice had invaded.  I always thought bees would sting them away, but I suppose they were overwhelmed.  When I opened the hive to do a check, there were NO bees.  Well, maybe a dozen were starved, but everyone else was gone, and so was their honey.  Nooo, I mean their HONEYCOMB was gone.  Holes were eaten in the comb.  There was nothing left for them to eat. 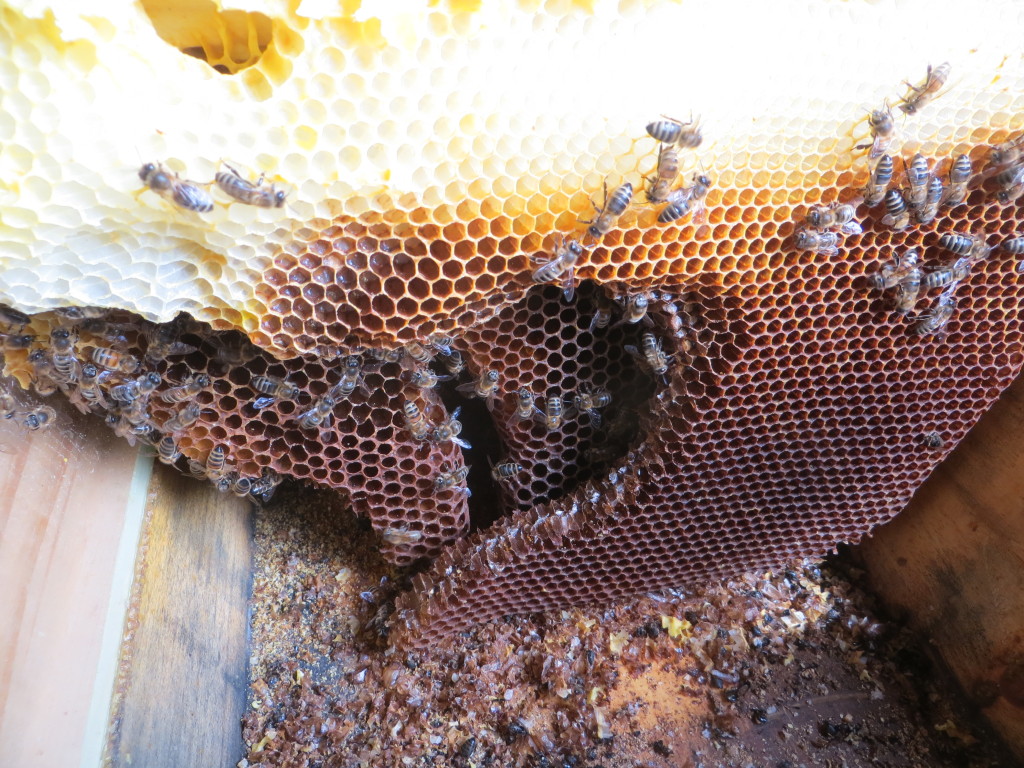 Hopefully, they swarmed, leaving the (*&^%$%^^ mice to their hive, and they found somewhere else to go.  That’s what I *want* to believe happened, but if they did, it’s a tough time of year to swarm.  It’s been pretty cold, down to 22˚ the other night… and there really aren’t *that* many flowers out.  There are plenty of places to hide in the junk pile, so maybe I’ll notice them when it warms back up and I can go looking.

I seem to be populating Wyoming with honey bees…

I have a call into Bryant Honey and I’m keeping fingers crossed that Don can provide me with some more bees.  His are what I had in my Golden Mean Hive, they were nice last summer and are doing ok, although the mice got in there too.  (The photo is of my Golden Mean Hive)  I caught it in time and provided the bees food in their hive to keep them happy in there.  They have some larvae, not a lot, but some, so maybe, they’ll stay!

Since Messopotamia was empty, I’m overhauling it some.  Too late, but I’m putting 1/4″ mesh over the entrance holes.  Bees can go in, mice can’t.  I finally dug out every bar in Messopotamia and guess what?  Where I thought the cross-combing began, was the *last* one that was cross combed!  The rest were nice and straight!  Poor Messopotamia has only lived up to part of its name…  I’ll rip saw some 1/4″ spacers that might help though.  (Honeycomb is thicker than brood comb, so it has the tendency to get crooked or cross combed.)

I was on the verge of buying or making another top bar hive (just in case)… like if I saw a swarm, or just *because*.  Now, back to just one hive, the rush isn’t there.  It still is on my slate… I’d like to try to build one, although I *KNOW ABSOLUTELY* it won’t be as gorgeous as my Golden Mean Hive I bought from backyardhive.com, see my affiliate link on the sidebar.

Wish me GOOD luck, I’ve had enough Bad with my hives!  If you’re curious about more bee “stories”, just go to the top of the page and click on the BEES tab.  You’ll find all my posts about bees, videos included!

(Disclaimer:  some mice were injured/harmed, ok, I killed the ones I caught!, during the making of this post.  I am not sorry.)

(Bee miscellany for Easter:  Did you know that the ascended Jesus Christ was once called “apis aetherea” or celestial bee? Peter of Padua called Christ “Apis Aetherea”, for, “as the bee flies up into the air, she is a symbol of the soul who enters the kingdom of heaven.” Following the Egyptian myth that bees were born from the tears of the sun god Ra, Christian legend has it that bees were created from the tears Christ shed on the cross. The sweetness of honey and the sting of collecting it became a metaphor for the nature of Jesus himself and the agony of his passion. To obtain higher knowledge one has to suffer. Regarded as never sleeping, the bee represented Christian vigilance and zeal.)  (from homeoresearch.blogspot.com)