The sound was strange and my stomach sank.  All dogs were asleep inside, alternately underfoot and snoring in the corner as befits a proper English Shepherd.  This was during a snoring span.  I turned to the window and saw a man, older, grey-haired, sweatshirted paunch over flannel pajama pants.  He was walking in my barely used front gate, exhaustion surrounding him.  I went to my front door and opened it.

And then began his story.  Condensed it sounds like this… 73 year old man and wife from Florida, with roots in New Hampshire, touring the National Parks.  While in Yellowstone someone suggests “Devil’s *something*” and “the faces in the rock”.  Encouraged, they deviate from their original route, plug in Devil’s Tower and Mount Rushmore into their GPS, and never glance again at a paper map.  Between Yellowstone and here, they pass one gas station.  (You’d have to try pretty hard to miss all the towns between here and Yellowstone, but I guess they did it.) At 6 pm the night before, they’re 20 miles south of Ten Sleep and follow the Almighty GPS up the mountain IN A RAINSTORM that had lasted three days by this time, WHICH TURNS INTO SNOW in two miles.  Now, as soon as the CAR’S tires hit GRAVEL… They should have stopped.  They should have said “This can’t be right.” and gone back to the closest town or stopped by my house and asked directions!  No.  They continued.  Ten miles later, they’ve slid off the greasy slick dirt road and are hopelessly STUCK.  NO SHOVEL, and his golf clubs didn’t help them much, though he tried.  NO BLANKETS, so they dug clothes out of the suitcase and layered them on.  A few crackers and candy, and alternately turning the car off and on, were their best choices of their freezing, sleepless night.  Their cell phone had no reception, even though they tried multiple times… although they didn’t walk to the top of a hill for better signal.  As soon as it was light, he took off walking.  Heart condition, tennis shoes in mud, flannel pants, for heaven’s sake… She sent a note along with him with the details their GPS gave them.  She fully expected him to have a heart attack on the way down the mountain and she wanted his rescuers to know where she was waiting in the car.  I gave him a drink of water and tracked Vernon down.  The man wanted to know about a tow truck.  “It’s at least an hour away and won’t want to go up the mountain in the rain… Don’t worry, we’ve had lots of practice pulling vehicles out of the mud.  Let’s get your wife first.”  Daniel and Vernon soon arrive and they pile in the pickup.  Ten miles.  (For you locals who don’t measure mileage, by Bobby’s sheep corrals up the Dry Farm Road.)

Wow.  I’m impressed he made it down.  He’s lucky and God was definitely watching over him.  This could have turned out so bad, so easily.  His heart problem not withstanding, had it begun to rain or snow again, hypothermia could have got him, a turned ankle, getting lost…  No intelligent local would be traveling up that mountain any time soon, we know it’s too slick.  If they’d done that at the beginning of the storm instead of the end… if it’d been colder… Staying with the vehicle would have made them hungrier/thirstier before they were found for sure… but that’s the typical advice from search and rescue.  He was lucky.

My advice?  Tourists:  I’ve seen it happen more than once, so put the GPS away.  It doesn’t work here.  It will take you on back roads and private land where you have no business being in your little cars so unprepared.  Get a Wyoming highway map, they’re free at every gas station or visitor’s information center.  Use some “uncommon” sense and avoid gravel and dirt roads if you aren’t familiar with them.  I’m all for “adventures”, but, for heaven’s sake, BE PREPARED.  P. S.  Your cell phone won’t work in a lot of places either.

Because it was so pretty… another shot of the sunset… 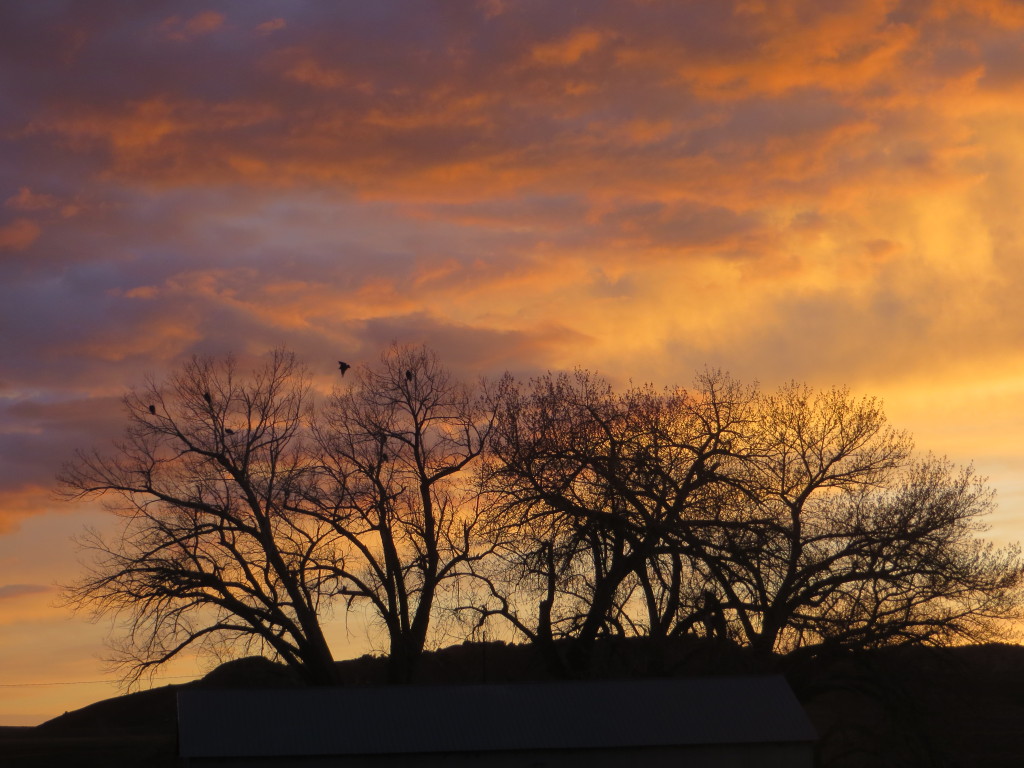 15 thoughts on “Put Your GPS Away”