We branded Brandon’s little leased herd today… pictures to follow… then I spent the afternoon on my lawnmower trying to catch up with the out of control grass.  Before I knew it, here came Vernon, and I headed to the house to cook something for supper.

Washing my hands at the sink, I noticed two young women walking down the highway.  That’s weird, because we don’t usually see people walking around here.  Before I knew it, Brandon is escorting the girls to my door.

Laughing, he says, “These girls are stuck on the mountain.  About 10 miles up.  They were following their GPS.”

I thought he was joking.  He is a funny guy, my Brandon… and here was the opportunity to tease us.

Within minutes they were loaded in the pickup, and the guys (and me, too, this time) were off on a rescue.  Turns out they live in Miami, but one is really from Germany, and one from the Czech Republic.  They were coming from Yellowstone to……. yes!  DEVIL’S TOWER!  How amazing that within a week, we have had two parties, both originating in Florida, (although these girls flew to Salt Lake and got a rental car), then to Yellowstone, and then ending up stuck on our mountain.

Both young and healthy, with water and an adventurous and giggly attitude, it was a hike, but still a “good story” to tell their friends.  The temperature was dropping though, and had they timed it differently, with more rain in the forecast tomorrow, they might not have been so happy in a few hours.  It was 31˚ when Brandon drove their car out of the muddy ruts… and windy.  Snow is not unlikely up there.  They did make it another mile past the guy from the other day… 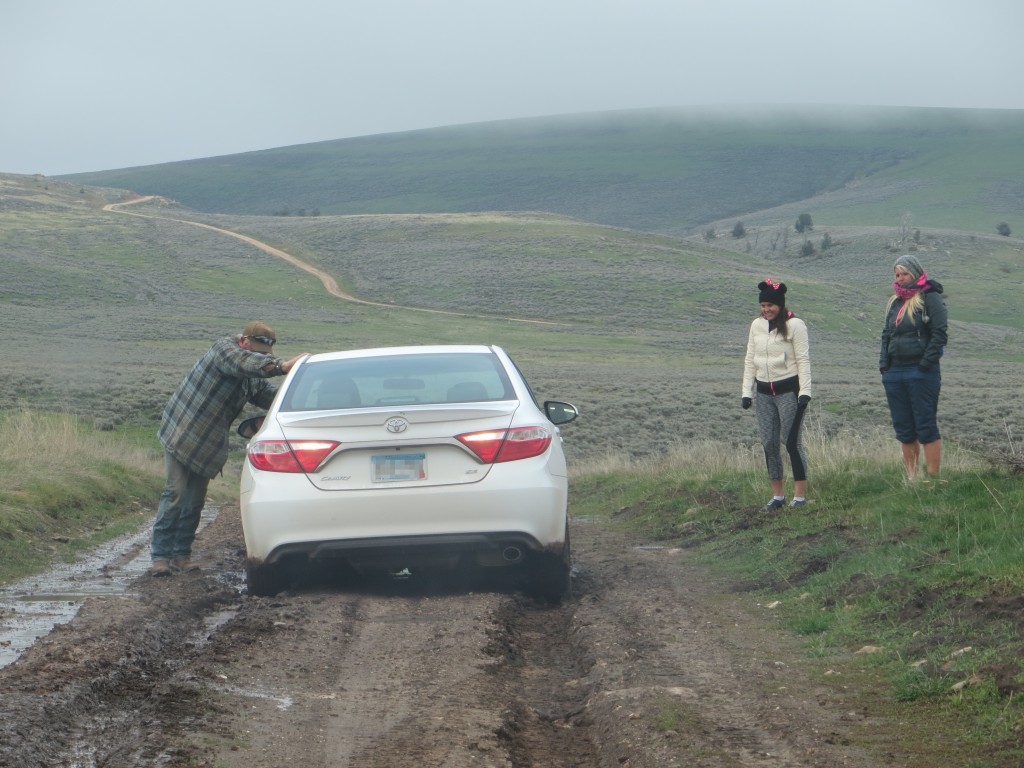 After driving their little car out of the ruts, Brandon continued driving them down the mountain as they’d slipped and slid their entire way up to here.  He checked their GPS and it was telling them that Devil’s Tower was on this side of Casper.  Casper is in central Wyoming and Devil’s Tower is on the eastern border next to South Dakota.  I remember telling the older gentleman he still had half a state to travel, and he was shocked.  We began to wonder if someone messed up and thought Hell’s Half Acre and Devil’s Tower were the same???  Something lost in translation perhaps???  This was a brand new Tomtom GPS.

We stopped at the foot of the mountain to collect Brandon, and I gave a little speech.  “Put your GPS away.  Get a paper map.  If the GPS tells you to go on a dirt road, don’t do it.  Get some warm clothes. (They assured me they were warm, they had multiple layers of little thin shirts on and those thin capris.  Do they look warm?)  Stay SAFE.”

I shook my head.  If I was a conspiracy theorist, I’d make up a story about how we are becoming so programmed to do what we are told, without questioning, without thinking for ourselves, that we can be easily made to Just Follow Orders.  Sometimes, it doesn’t sound like there is too much fiction in that story.

This is NOT unusual, people… we and our neighbors help these lost souls ALL THE TIME.  I’m surprised GPS companies aren’t being sued.  That this hasn’t created more tragedies.  That at the very least if someone gets charged for trespassing or reckless endangerment, that GPS isn’t listed as one of the parties in the lawsuit.

Please, if you or someone you know is headed out west this summer, give them a MAP.