Carolyn: How did the plastic tags work for weaning Brandon’s calves? I was telling Joe about it yesterday, but have either missed the blog saying how it worked, or you haven’t mentioned it yet 🙂

Carolyn, you didn’t miss a thing!  I had asked Brandon to video his calves and the calves we had weaned the day or two before… he didn’t have time, neither did I… and so that delayed a post from me.  As typical of just-weaned calves, ours were bawling for mama… sad little things… and pacing the corral (thankfully it wasn’t too dusty)… and not eating very much.  I’ve read up on various things throughout the years that are supposed to help this traumatic time… giving them something to think about other than mama, i.e., walking through them (sometimes with your dog), giving them a ball to play with, and even letting them out in a well fenced bigger area for a bit every day – just to mix things up, were all suggestions.  This is a good time for a calf to get sick, the bawling, the stress, and the dust can all cause pneumonia.  When I saw Quiet Wean in a magazine, I was intrigued.  Brandon did the typical vaccination and inserted the tab into their nose, then, when we would separate them, he returned his to the pasture back with mama.  The tab let them continue to graze, but interfered with the latching on to their mama’s teat.  All mammals know at some point, they will be weaned.  Within the next few days, they were.  Brandon regathered them, separated them, pulled out the Quiet Wean tabs, and turned them into a corral that he had previously spread out hay and a protein tub.  Some went to eating, some went and layed down, and a couple went to bawling and pacing.  Whaaaaaat?  Well, we had missed two the first time around and they never had the tab inserted.  In one corral were the extremes of weaning.  The two continued to miss mama for the standard few days, the others were content right from the start.  The drawbacks?  There were slight sores in some of their noses, making it tender to remove the tabs… And having to run them through the corral and chute to remove the tabs is extra stress as well.  While I consider it a success… the guys just can’t see running our big bunch of calves through the chute twice, inserting and removing the tabs, would be better.  Since I’m not the one probably doing this… I don’t imagine we will use it on most of our calves.  That’s too bad, because it really does work!

Margaret: I was in Dubois this last summer. There was a young grizzly bear traveling through the edge of town. Locals said they are extending their range. Have you had any encounters with them or an increase in their population in the vicinity of your ranch?

Thank goodness, no.  There have been rumors of the occasional grizzly in the Big Horn Mountains for years, but the Game and Fish say there are none, and that’s ok by me.  It is only a matter of time, I’m sure.

Marilyn: Did you ever get a Canadian flag?? If not would you like one for Christmas? I would love to send you one.

Marilyn, I have a little Canadian flag I bought on my honeymoon actually… We went to Glacier and Banff and Calgary… Thanks though!

OOOOH, I’ve been taking a couple of pics… time for an updated post soon!

Judy: I was wondering how your bees and chickens are doing? such fun things to have….

The bees… Two hives did great, and I lost one.  I harvested a bit of honey, but left most of it to them… people kept talking like this winter was going to be a bad one, so I figured better safe than sorry!  I’ve closed up the bee barn since it has been dropping to the 30’s and 40’s at night… also to discourage any coons or skunks who might be looking for a meal!  I still need to do a few other things to prepare them for winter… but the weather looks like it’s going to hold a while, so I’m not in a rush yet.  Chickens… I have 6 hens and the big rooster still.  Somehow, I either have too many or too few… I can’t supply everyone with enough eggs because I’m usually just getting 1 or 2 a day.  I think a dozen chickens is what I need!  The chick I raised has grown into a big hen… she’s the only one with a name… “Spot”.  Hey, she has spots all over her!  She and Eden often “play”… Eden feinting and play bowing, Spot charging, hackles raised.  I don’t allow it to happen very often, visions of Eden packing Spot off in her mouth come to mind, but they will seek each other out.  I can’t see it ending well at some point, but sometimes I look over and there they are…

Joanne: do you have wild horses near your ranch and do they conflict with the running of your cattle ranch? Thanks

The closest wild horses I know of are the ones up by Cody.  We have no conflict with wild horses here…

Liza: Is the studio finished? Can we have a tour?

Cindy: What made you choose to run black angus? And how do the black angus differ in maintenance & calving vs. other breeds or the baldies?

We started off like so many other ranches running Herefords.  That’s what there was… We once tried using Longhorn bulls on our heifers for calving ease – which worked great, the calves were little bitty… but then when we tried to sell them, uh, the calves were little bitty!  Plus Longhorn bulls are a pain in the rear!!!!  We had a couple of Charolais along the way… lots of frame, but naaaah…  Then we started with Angus.  Buyers love Angus.  Hybrid vigor gave us low birth weight but great gain later… yeeehaw!  After spring time snowstorms where the white udders of Herefords sunburned, the black udders of Angus were a blessing.  Ditto with the white eyes which got cancer in the Herefords. Footrot seems to be a thing of the past as well.  Buyers like black hides and they seem to have grown on us as well!  Angus do have some brisket disease problems, but that is why we search out low PAP scores on our bulls.  Victoria and I keep hoping we will cross back with some Hereford, just to get those nice baldy faces back, but we also keep getting shot down by the guys…

Kay: The white stuff painted on the cows to indicate when they might have a calf what is that stuff?

It’s the same stuff humans use to bleach their hair… just a bit more concentrated… and foamy!

Thanks for the questions, folks… I hope I got them all!!!! 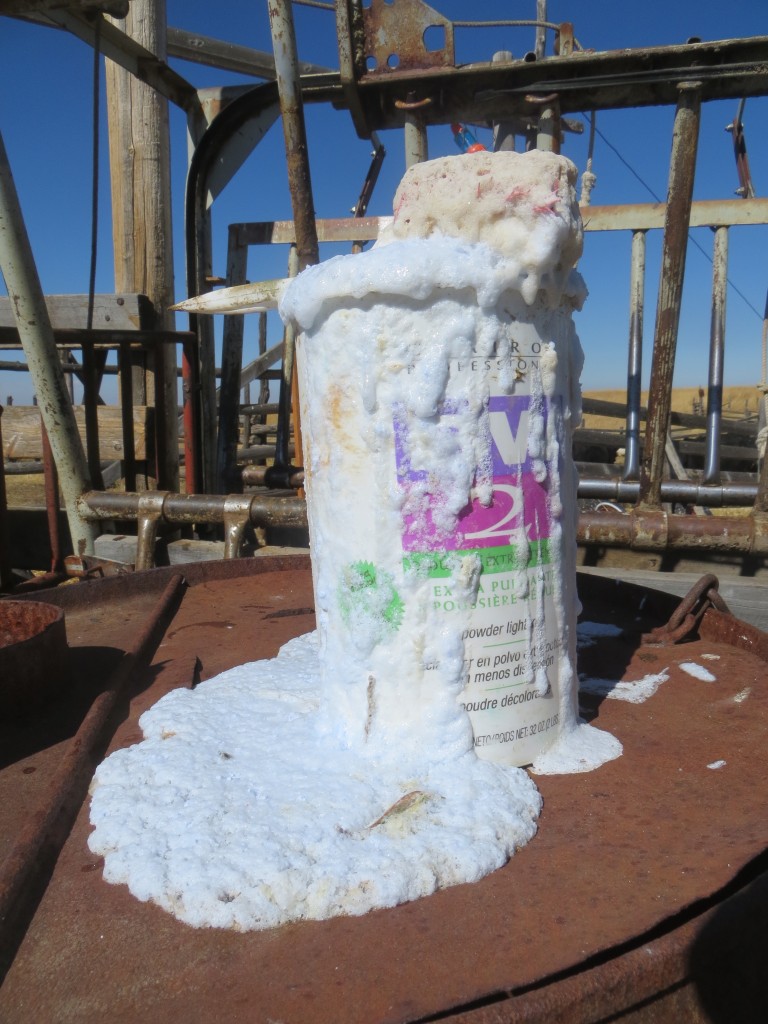