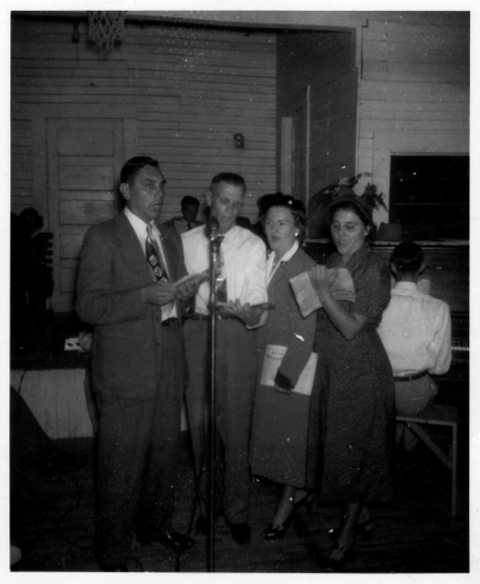 Well, I just can’t post old photos of the Greets… I have 50% of the genes around here!

This is a great photo of the Antlers Quartet, a singing group in Antlers, Oklahoma composed of my grandfather, Victor Underwood (on the left), Bill Sossamon, my grandmother, Lila Underwood, and Jimmie C. Sossamon.  The piano player was Jimmy Loman, a full blood Choctaw who could hear a song once and then play it on the piano.

Dad-dad had a great bass voice and was known to be able to sing the notes (do, ray, mi, fa, etc.) to the notes instead of the words.  He had just been elected president of the TriCounty Singing Convention just days before his death at age 42.  I never knew him.  He was 3/4 Choctaw.

Mam-ma sang soprano in the quartet, but alto when singing alone.  I remember her fondly, although living in Oklahoma, I didn’t get to see her very often!

They traveled around southern Oklahoma to gospel singings, cut some records (which, yes, I have on tape and CDs now), and, at one point, they even had a radio show on the Hugo, Oklahoma radio station called “The Antlers Hour”.  Each show began with “Give the World a Smile Each Day.”

I have copies of their hymnals as well.

My mom sang with them on occasion, and is on two of their records.  She had a wonderfully clear voice, but I never could get her to sing for my kids because her voice shook by that time, and she didn’t like it anymore.  Standing next to her in church was the only time I could hear her sing.