After going on a chicken hunt this morning, I went in to work at the library to cover for a sick co-worker.  My chickens occasionally prefer to go walkabout and I only had four in the coop when I went to lock them up last night.  Now, there are just about a bazillion and a half places chickens can hide around here… and Eden didn’t find them in the two favored spots.  I wished them well, wherever they were, and figured I’d see them first thing this morning.

Well, I didn’t… so I decided to go on a chicken hunt.  Their tracks were everywhere, so I ignored that and just listened.

Really?  Because Spot is usually a Very Vocal Rooster… I listened more… and then sent a pitiful er-er-er-er-ERRRRR into the cold blue sky.  Ha!  He couldn’t resist answering me and he was way over by the corral!!!

We tromp over and sure enough, Spot and six hens have “trapped” themselves in a three sided shed.  The three sides lay in the direction of the coop… so it must have blocked their way!  I sent them scurrying out the front and they ducked under the corral fence and ran promptly into another fence corner.

Those silly girls could NOT figure out how to either go under or around the corner.  Eden was so frustrated!  I sent them BACK into the shed, and opened the back door.  They took two steps out into the snow and stopped.

I could see their tiny little brains thinking they needed to return to the dry shed… so Eden got a whistle and chickens were Highly Encouraged to continue through the snow!  Once they traveled, oh, maybe four feet through the snow, they hit the plowed road and then it was a fast track to the coop for breakfast.

The more I’m around chickens… the more I understand about The Little Red Hen and her famous phrase, “The sky is falling, the sky is falling!” <insert panic> <insert running around frantically!>

My project for the day was delayed until evening, but it’s halfway finished.  I’ve put two cheap fleece blankets together to make a warmer one for my car.  I need to clean it up and finish… and voila!  A nice little travel blanket for the Jeep. 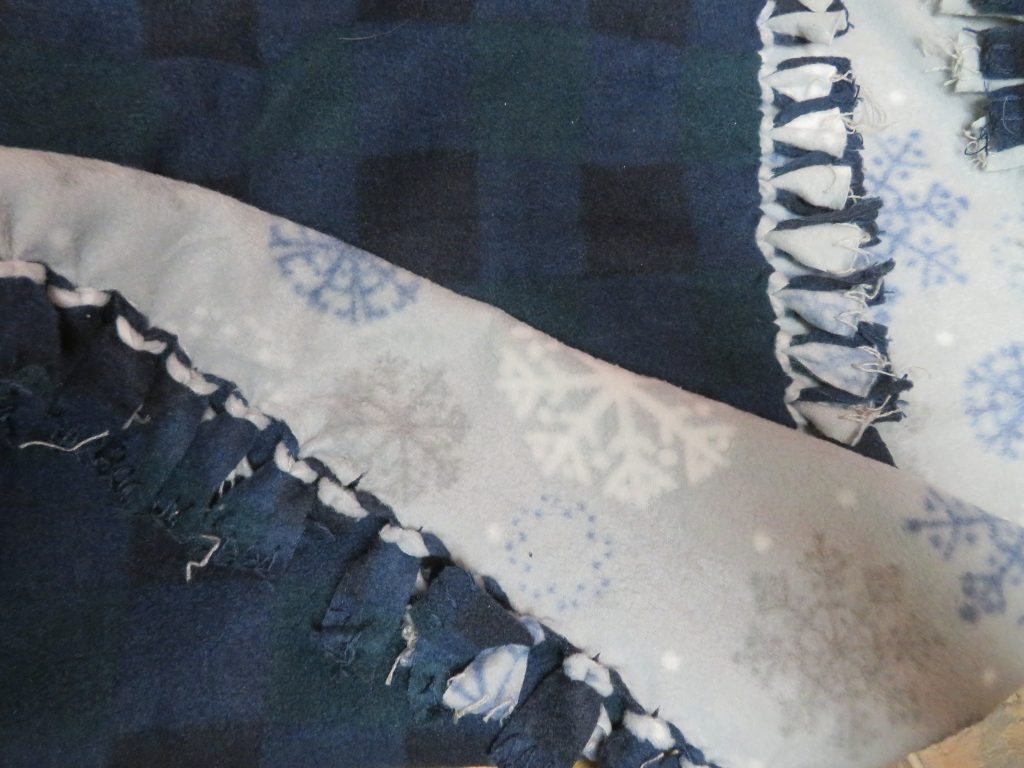