How do you start?  How do you begin to tell the story when your heart is ripped out and tears pour from your eyes?  Your fingers spend as much time wiping your eyes and nose as they do typing.  This is the post all dog owners know they will write at some point.  The one you don’t *want* to write – EVER.

When we’re lucky, we find THAT dog.  That one that understands you, that pokes his nose under your hand when you’re sad, the one that can look at you with the goofiest grin just to make you smile.  The one that poses in his regal way even if he didn’t really like cameras.  The one that would work himself to death because you asked.  You know.  I’ve written about him for years.  I’ve posted photos and videos and stories and even won an amazing award with one of his photos.

I will say it.  On July 5, 2018, I had the vet drive all the way to the ranch to put Lucas to sleep under the shade of my cottonwood trees.  He deserved that at least.  He deserved so much more.  I could not bring myself to have him die in the vet’s office on a hard metal table with little yappy dogs in the background and the thousand smells of illness and pain.  So as the house wren sang and the ranch’s summer sounds of sprinklers and tractors serenaded him, The Good Doctor eased a shot into my sable boy and he slipped away underneath my loving hands.

I had been preparing for days… but all the preparation in the world still cannot ease the pain when the last breath of your best friend eases from his body.  I couldn’t write about it, I couldn’t think about it, I went on auto pilot for a bit.  I attended my Girl Scout reunion where unheard messages had been passed around and I received few words, thank goodness, because that would have tipped me over the edge into blubbering sobs, but instead I got quiet hugs, and short sympathetic phrases that I could handle.  They lifted me up as friends do and made me enjoy days that otherwise I would have wallowed in my tears.  Thanks, ladies…

Monday I had taken Lucas and Eden over to the vet for their first AI session of this cycle.  We’d tried it Saturday, but Lucas was uncooperative on his part.  This Monday AI session was more successful, at least Lucas produced some semen for Eden.  We returned home and I let them out of the Jeep.  After unloading groceries, I noticed Lucas laying in an unusual place, but didn’t think that much of it, until I came back out an hour later, and he was still there.  He was hurting and didn’t want to move.  I wasn’t sure if he had twisted something getting out of the car, or just had a catch in his get-along from AI-ing.  He had laid in the hot sun on a hot day, and we were concerned about heat stroke as he lapped up the water we held.

By dark, there was no doubt his current pain meds weren’t enough.  Victoria drug out my sleeping bags for me, and I pitched camp alongside Lucas in the grass.  I dozed through the night, 80% sure this was his last on earth.  It wasn’t, so in the morning we bundled him up and returned to the vet.  Blood work was good.  The exam by the Good Doctor found extreme pain in his neck and shoulder area.  He could have hurt himself getting out of the car… he could have slipped a disc.  With three bad legs, his one good one could no longer hold him up.

He came home with steroids and extreme pain meds.  Forty eight hours was going to be the test period.  I kept him under the shade of the cottonwoods… he drank but wouldn’t eat.  He’d suffer the embarrassment of wetting himself because he couldn’t stand.  He’d raise his head and try to sit up in that famous Lucas pose, then flop over exhausted.

I brushed and petted and cried and read to him and reminisced and told him how good of a dog he had always been.  I apologized for leaving when my Girl Scout obligations pulled me away, and held my breath when I returned, waiting for the white tip of his tail to wave at me as I drove in.  He scared me again and again… but he would open his eyes and lay a paw on top of my hand.  In concern or sympathy or forgiveness or even to simply ease his pain by elevating it a bit, I will never know.

Lucas, “bringer of light”, had led me on a wonderful journey these past 12 years.  I learned about the English Shepherd breed.  I met people from all across the U.S.  I delved into dog training and breeding and acupressure and reading therapy and T-touch and genetics.  I brought in Elsa from De Butcher and sold puppies from coast to coast.  I raised Dally and met more people breeding her.  I made a website so people could find me and called it Rimrock English Shepherds… where I started a small sideline blog at first entitled “Overlook”.

It was all because of Lucas Cade.

Because he wasn’t just a Good Dog.  He was a Great Dog.  That final afternoon I told him so.  I told him to run far and fast on his newly healed legs.  To bounce through the grass with a goofy grin on his face with no pain for the first time in over eleven years.  I told him I’d be okay, that him being free from this extreme pain was more important than how I felt.  I told him to look up some guy named Charlie Burton, who taught me to love dogs… and that Jerri Burton would be there too.  She was the nice lady who went along on his acupuncture treatment.

I fell silent.  I ran my fingers through his lion mane.  I buried my face in his fur and breathed deeply.  I looked into those golden and brown eyes for the last time, and knew how lucky I have been to share my life with him.  My sister-in-law wrote, “Lucas has always been a special dog, not only for what he endured, but the spirit in which he endured it.”  That is perfect.

So Eden and I walk quietly around the place, glancing at his favorite shady spots by habit.  We expect his galumphing gait to sound across the floor.  She sniffs at where he lay that last time.  Vernon insisted on digging his grave, and oh, my… I thought I had myself under control until Vernon joined me in shedding some tears.  There was no doubt, Lucas Cade, that we loved you!  He now lays next to Elsa and Dally and Colt… just outside my studio.

For years, I’ve cried at the words of this poem, knowing that someday it’d be me saying the words…

“… if you’ve never owned a big Malamute (or English Shepherd), perhaps you can’t understand, that ol’ longing I get, especially at night, just to feel his big head in my hands.  So at times in the hush of an evening, when the winds have grown tired and are still, I’ll sit here just waiting for Memory to call, just hoping she’ll bring Big Wicked Bill (or Lucas Cade)!” 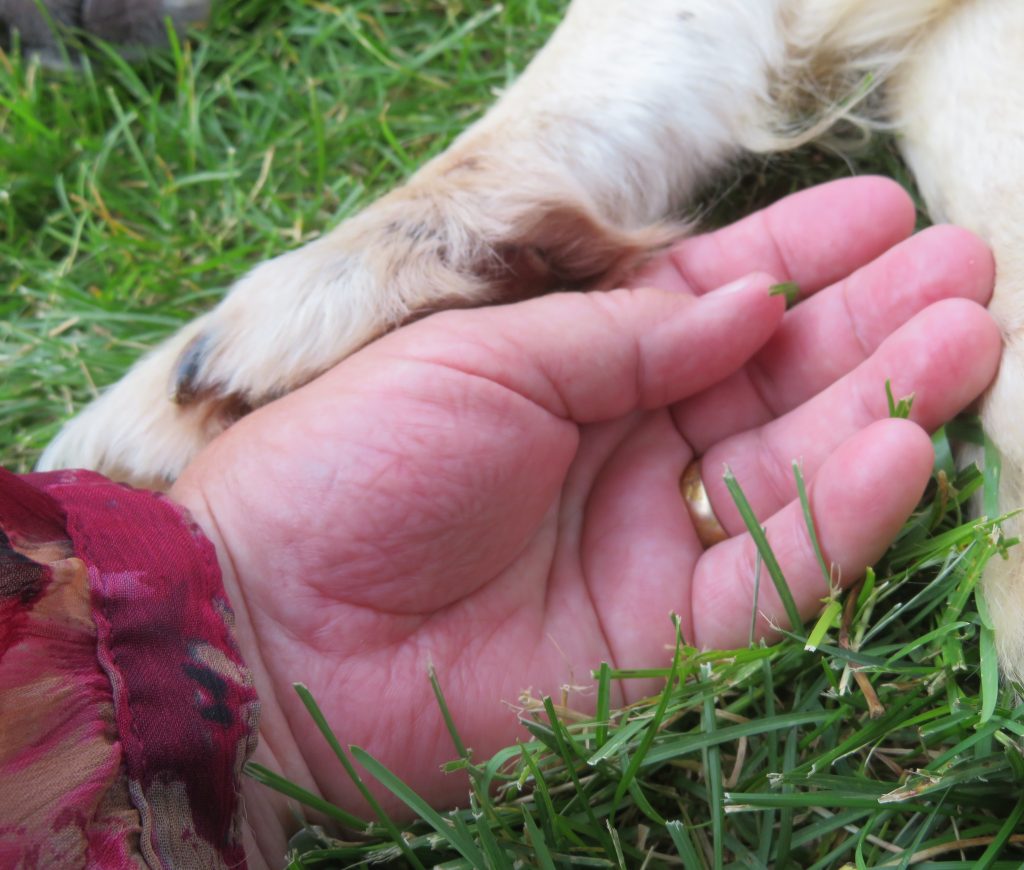 50 thoughts on “The End of a Journey”