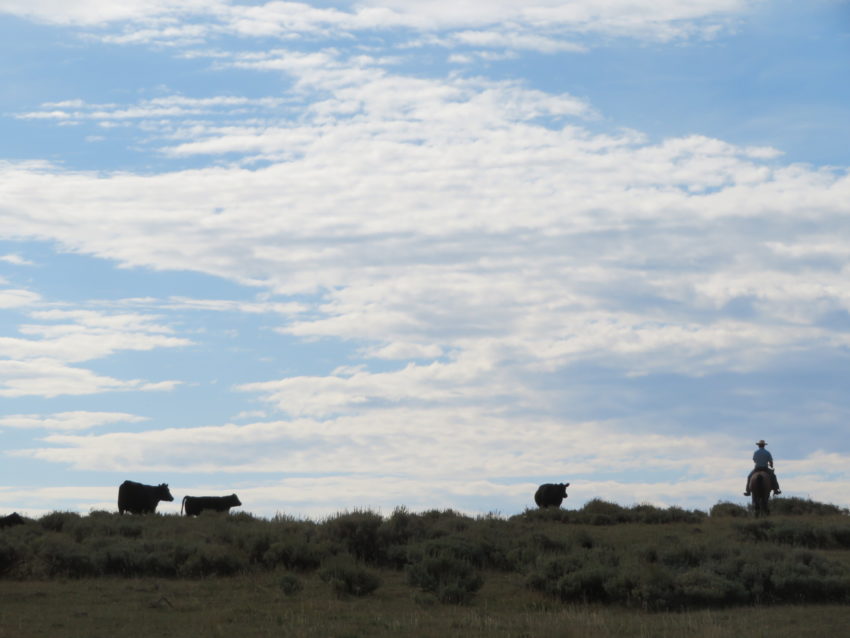 We gathered the mountain pasture.

My cows didn’t seem anxious to move. They liked their grass where they were, just fine, thank you very much.

My standard operating procedure is this trail, just below the ridge, but not along the canyon bottom. However, standard didn’t apply this time as the cows were all up high. Usually, yelling will get them moving as well. Nope and nope.

This is where your cowdog comes in. If you have a cowdog you can send WAY OUT. Elsa excelled at this. Dally was more visual and less trusting. Eden… nope and nope. Not her thing. Total lack of understanding. Now later, with Tuff, she’d go WAY OUT with him on the prairie and do it quite well. But alone? When she couldn’t see anything? Nah.

Now maybe you can’t tell, but it’s a flipping steep hill right here and the trail cuts through slick flat rocks and under trees. Not a great horsey trail. I abandoned Panama. I clambered up the rocks in my boots, praying I didn’t fall, trip, twist or slide. The cows were out of sight by the time I arrived, cussing loudly and sweating.

Turning back downhill, I continued my diatribe against dogs, horses, cattle, and steep rocky hills. All it did was let loose some steam… until I reached Panama, who I was happy to crawl upon to finish the descent to the level trail. With Eden faithfully by my side, I just kept yelling at the cows high above me.

Right then, the cavalry came trotting around the ridge corner. Megan and Brandon had heard me and came to help. Though the cows scattered through the trees, at least you could each take some without trying to ride through rough timber and boulders!

We continued along… mostly content to move. The cows would try to ball up on us, but with Jekyll, Tina, Tuff, and Eden, the cattle didn’t stand a chance. Eden is much more confident with other dogs around. Tina was shining like a little star. Jekyll picked up quite a few on his own. Tuff was distracted by Eden, he would really like to be her boyfriend. But give him a WAY OUT command and he was on it!

Finally, everything is in the corral… time for lunch… and then the real work begins.