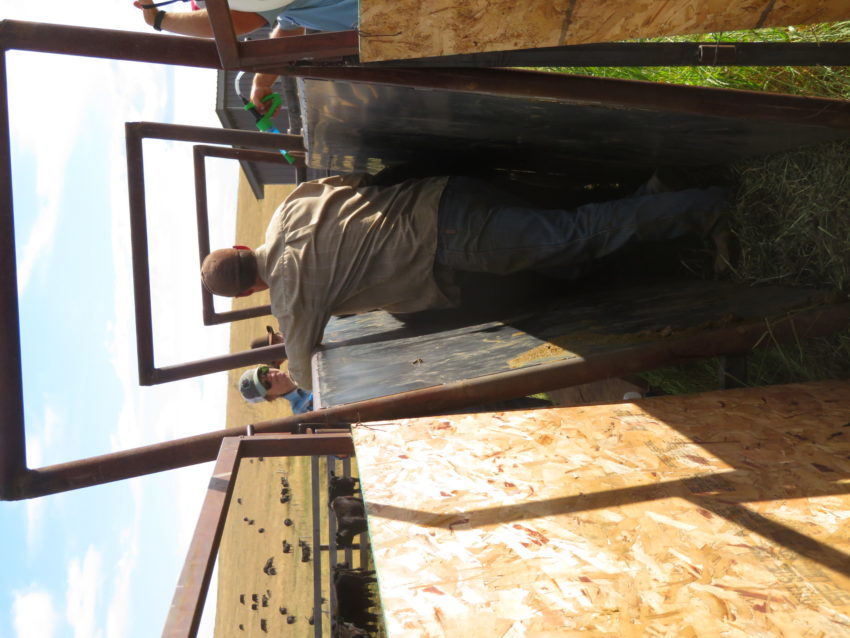 We vaccinate ahead of weaning to give the medicine time to kick in. Weaning is a stressful time, and we don’t want the calves getting sick… so we do our best to take care of them.

That means gathering the pasture like I talked about yesterday.

We then separate the cows and calves, turning the cows back into the pasture so they can go back to grazing if they’d like to.

We’ve always used the long straight (and wide) alley, but this year Brandon decided to change it up. He built the Vaccinator 1000! Pop on over to his blog to see it in its many building stages.

It’s just a shortened alley, calf sized… easy enough to reach over and vaccinate. We’d run in four calves at a time. I counted to sixty in my head from the time we’d start to the time they were turned out. That’s pretty decent speed for 3 shots and a pour on insecticide!

Johnny would let them out the front gate. But the back gate was special. The back gate was Brandon! We would get them get them up the alley, Brandon following right behind, shoving them in tight. He’d grip the sides of the chute and hang on as the calves might try to back up, struggle, or rear. That’s when Megan and Daniel would quickly give the shots so Johnny could release them.

I should have taken a picture of the front of him… all I can say is, I’m glad I don’t do his laundry anymore!

It worked fairly well, at first they didn’t want to go in, but then they loaded just fine. Maybe the sun moved and shadows weren’t so bad. Who knows? Cattle don’t like shadows, they look like deep, dark holes. We discussed perhaps shortening the bottom so sunlight comes in any part of the day. We also talked about changing the approach.

Cattle like to circle back to where they came from… maybe a different placement would make it flow more easily.

It’s still much better than running a bunch up the old, long, wide alley and have them turn around on you!

Brandon counts them out the gate when we’re finished.

Answers to a couple of questions on my yesterday’s post.

Eden and Tuff will NOT be making babies. She came into heat almost four weeks ago, but Tuff thought she still smelled REALLY GOOD. He was behind her almost the entire time… she did NOT appreciate his attentions.

Jekyll is Brandon’s Aussie mix, Tuff is his father.

Tuff and Tina are Aussies that belong to Daniel.

It was also the last trip for Johnny’s dog, Sam. Today he went to the Great Cowdog Pasture In The Sky where he can herd cattle all day long and never be in trouble. He was a good dog and Johnny’s companion. It’s nice to think he got to go to the mountain one last time. All he ever wanted to do was move cattle. You will be missed, Sam.

2 thoughts on “The Real Work”