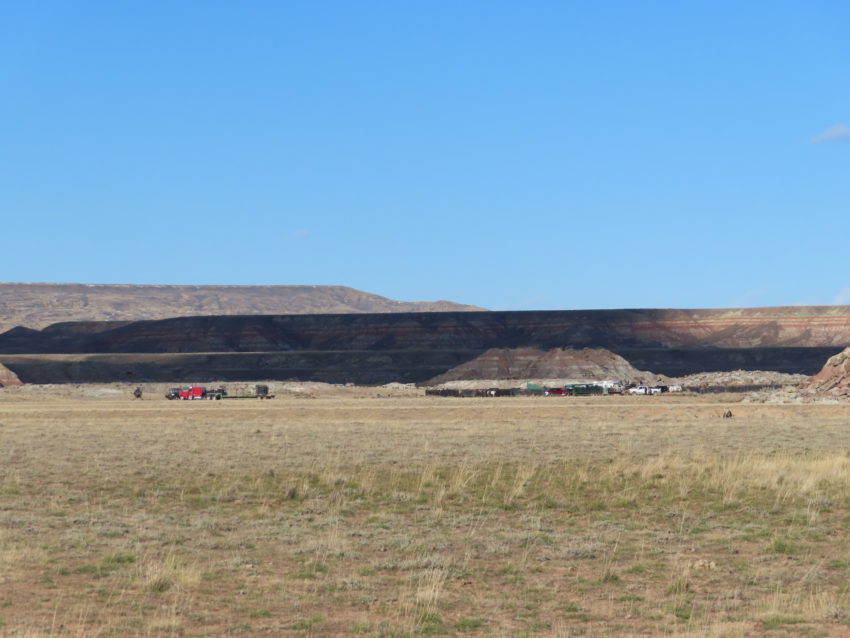 We met early at the local BLM office. (That’s the Bureau of Land Management for all you non-western state people!). Four vehicles formed the small caravan as we drove over an hour to the Fifteenmile HMA.

This arid 81,000 acre plot of land is supposed to be home to 100-230 wild horses. Currently, it is estimated to be home to close to 700. They held a roundup over the past week to cut those numbers back to around the 100 mark.

As you enter the HMA, the first thing that struck Johnny and I both was the abrupt change in soil. While the pasture before has a good stand of grass being eaten by antelope and cattle alike, the HMA was much more sparse… small bunch grasses, low slung plants, all grasping for purchase in the soil. The average rainfall for the area is 8” where at my house, we expect to see 14”. The past two years have been exceptional, so, relatively, it looked good out there. Now, granted, we didn’t drive all over the 81,000 acres, but for the places we could see, it’s not the best grazing allotment! No livestock are grazing in the HMA, even though sheep could, the ranch has chosen to not use it lately.

The next thing you notice is the stark beauty of the soil and rock formations. The light was shifting constantly ranging from dark overcast to bright sunshine and blue sky and then back again and the variety shows up in my photos.

When we arrived, the small helicopter was already flying, searching for the small splinter groups that had peeled off from the bigger bunches as they were gathered. We could hear him and see him much of the time as well as listen to updates over the walkie talkie.

They had already gathered 540 by that day, with most of them already hauled away. The total gathered for our day was only 18, coming in three small groups. Much like gathering our cattle, the big bunch is the easy part, but riding the corners and draws takes a while to find them all. In fact, they were going to reposition and reset the trap and corral outside of the HMA, since there were bigger herds outside than the few left inside.

After the 18 had been gathered, they would sort them, splitting mares from stallions, those staying, those leaving, and pulling off three domestic horses (well, one was a mule!) for the brand inspector to look at. They would age them as well, the younger ones are more adoptable. I would have liked to have seen all that, aging a wild horse’s teeth has to be tricky!

It took a while before we could go walk around the corral and sorting area. We could finally see the trap and where they had the sisal twine wings that fed them into the trap. A domestic horse is held right at the gate and is released to run into the corral when seen by the wild horses. “Oh, a Judas horse,” I exclaimed when I was told this was the standard method of luring them into the final part of the trap. Well, I guess it’s not politically correct any more or maybe it’s just bad press to call him that… but anyway, you guys know what I mean!

We walked around the corral as the sun was lowering itself into bed. Those photos I will post tomorrow!