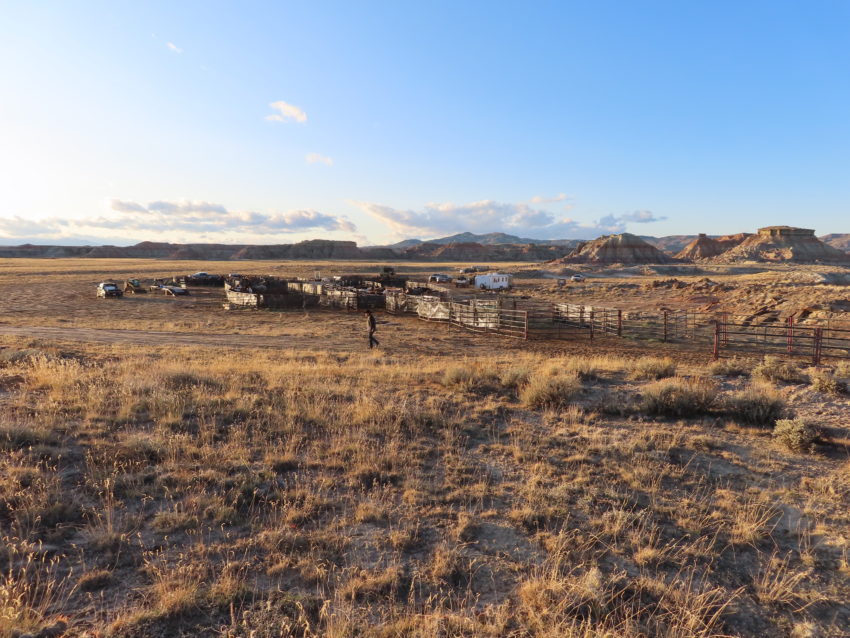 The wild horse corral at the Fifteenmile HMA was a stout affair. We use portable panels on occasion. A couple of well placed metal t posts and some wire usually does the trick. Not here. This setup is solid!

After they come into the trap, fed by wings of sisal twine, the horses are sorted and aged. That was all done by the time we got there. We weren’t allowed to approach the fence where the horses were closer than about 30’, I’d guess. The panels were lined with a grey plastic fence, what we would refer to as plastic snow fence around here.

It made it difficult to see their bodies, unless they were back lit by the sun. From the ones I could see, they looked in fairly good shape.

Those that had been in the corral a day or two were eating hay from under the panels. The newly captured were standing on the off side of their pen, checking out their situation. Studs were separate from mares. Their turnout rate is planned to be 60-40 to reduce the population increase.

I watched the horses closely as I heard the little helicopter turn on and power up. As it lifted away, they didn’t run or cringe or act frightened. Ears pricked, heads up, they simply acted like a horse that was wary but not petrified.

The total gather is now over, with 107 horses left behind for the future. Twenty of them had a DNA sample taken to compare to the McCullough herd up by Cody. They did put down eight horses for health reasons, and two died from accidents.

This was a great experience! I enjoyed it all, even when the keys got locked in the pickup! The BLM personnel from Worland, Basin, Cheyenne, and Lander were nice, outgoing, and patient with all our questions. I’m very glad Johnny and I took the time to go. We want to go back. I’m interested in more photography and all those rocks… I think Johnny would love to see where the roads all go!