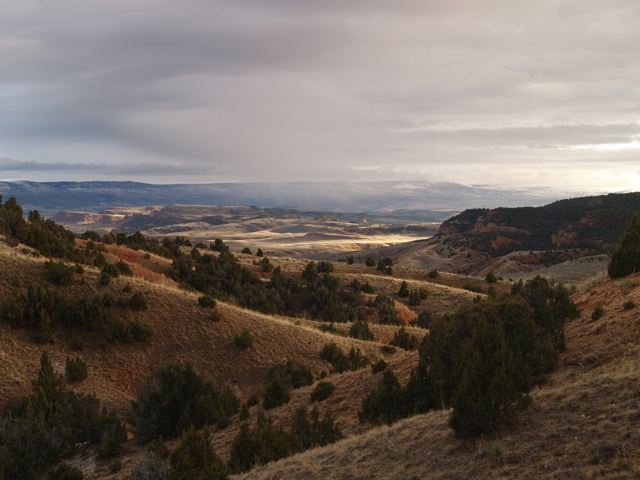 What began as an invigorating hike morphed into one of those meandering strolls, like Lucas and I experienced here.  But instead of Lucas being exhausted, it was me!  I feel so good lately, I go out and try to do activities like I did before my PE incident.  That was just a month ago but obviously not long enough!  Last night I tried clearing out my garden of cornstalks and sunflower skeletons, but that was too much too.  Sigh.  But never wanting to waste a good hike – and the dogs thought it was a GREAT hike – and since I had a lot of meandering time to spend getting back to my Durango, I started taking pics of DIRT.  Yah, good old Wyoming dirt.  I appreciate dirt.  The nice loamy feel of the hayfields, the sand and gravel bars of the creek that hide old buffalo skulls, the shale hillsides that spook me when I have to ride my horse across their avalanching surface, the red dirt that is in my soul.  Growing up with my Dad – who knew an amazing amount about dirt – and his friends who were geologists, you’d think I’d know more.  But look at this..

This is a closeup view of the myriad (I like that word!) lichens and… and Whatevers… on top of the dirt.  Whatever they are, they protect the soft soil underneath so that it erodes only where not protected by the myriad lichens and Whatevers.  Gee, so much for an educational blog today!  But here’s the scene of the hillside.

It reminds me in miniature of an otherworldly set from a movie.  Walk over the top, you disturb the myriad lichen, and expose the grey dirt below.  It is extremely fragile.  And cool.  Too bad the cloud moved over right then so the color is not as brilliant as it could be.

Look at this.  I’m ten feet away from the Otherworldly Myriad Lichen.  This extends clear up the hillside.  Drastic change!  Next to it was a grey shale, then this tan, then dark maroon dirt.  Now the grey shale, if it is the same that is found in the badlands, is from ash from a volcanic explosion originating in Yellowstone millions of years ago.  You can actually find leaf fossils in the grey shale.  And I looked and looked here… resting my weary body… but spied not a single fossil.

I just can’t resist Dragon’s Backbones like this.  It appeals to me, that sense of imagery, to think of a dragon sleeping underground with just his spine showing.  To think of the pressure and force that made these rocks stand on edge from how they were layed down is mind boggling.

Aha! back on familiar Red Dirt.  The iron that turns this dirt the rusty red speaks of home to me.  But best of all, I can lift my head from Wyoming dirt scenes, grateful that together they compose this symphony.