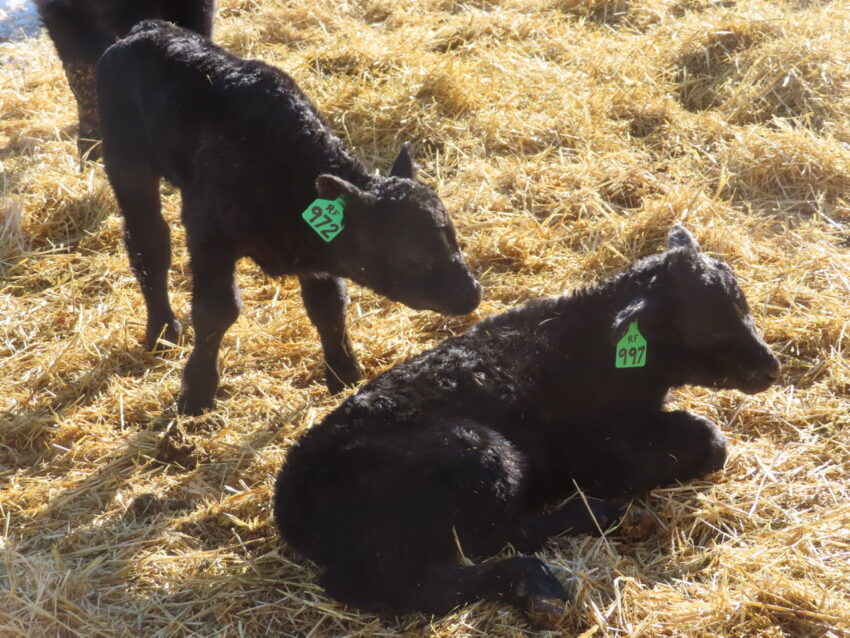 Even though we received another 5” of snow yesterday and the evening temperatures ducked down close to zero, today warmed quickly and the sun was soon glaring off the brilliance of the snow. Bundled in layers first thing in the morning, we were shedding coats and hats and gloves by ten.

Our baby calves had been getting their Velcro numbers. When the weather is so cold, and their moms, being good moms, keep licking them and licking them, often their fragile, thin ears will get frozen. I’ve made hoods for the calves to wear in that situation, fleece hoodies to hold their ears close to the head where their body heat will keep the ears from freezing. Since their ears are not available for their eartags that match them with their mothers, we put the numbers on Velcro and wrap it around a front leg.

You saw me putting one on in yesterday’s video. It can easily be seen here on the calf’s front left leg.

But with today’s warmth, and the forecast for 50’s by Friday, we decided some could start getting their tags.

Now, at a glance, we can see if they have their right mother. Since heifers as first time mothers, don’t necessarily keep good track of their babies, they can steal other babies while neglecting their own. Left to their own devices, sometimes they will try to adopt calves when theirs isn’t even born!
Besides the reasons given, it’s much easier to tag baby calves at a day or two old. Beyond that, they will have gained the strength and speed that they become very difficult to catch! You either must be very sneaky, very fast, or good at roping to catch the calf. All these we’ve been giving Velcro leg bands will be a challenge when we try to eartag them, but at least their ears won’t be frozen!