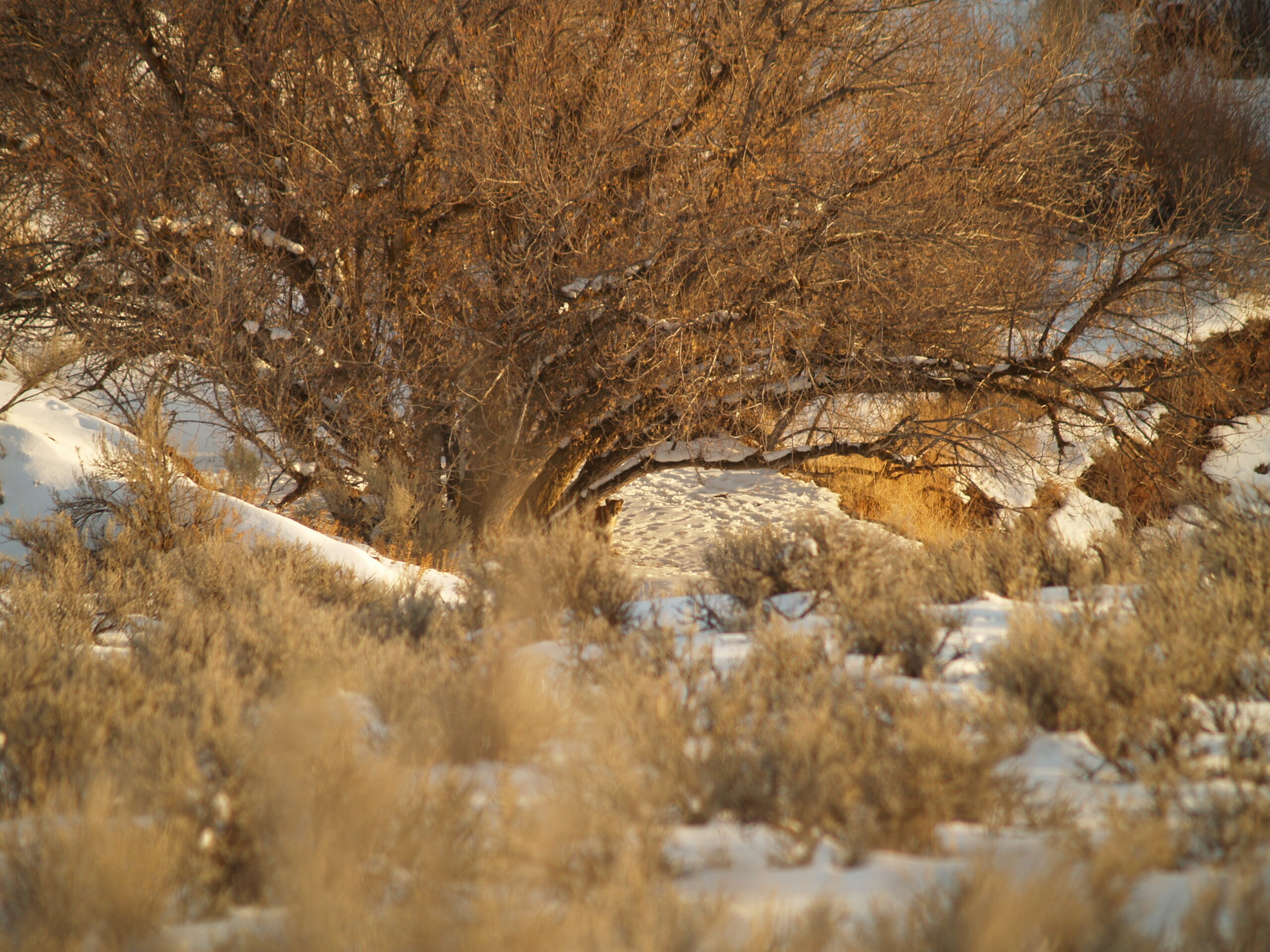 When I posted this photo a while back, I was thrilled with it, and I still am.

I’ve always wanted to see a mountain lion in the “wild” and boy! I’ve checked that bucket list item off multiple times as of late! We know they’re around… we see the evidence of them and we live smack dab in an area where mountain lion hunting is overseen by the Wyoming Game and Fish Department. They are not listed as predators but rather trophy game animals. They are not endangered. They are not rare.

They are just elusive. Until lately.

First came the drag trail that I filmed for a video in December. Evidence. No kitty.

Then a neighbor, driving 40 mph because of bad roads, barely struck one on the highway and it ran off… right there by the mailbox where the drag trail was. I called the local game warden. If it was suffering just off the road, it needed to be put out of its misery. He investigated the tracks… no blood, normal paw steps. It was probably ok. Evidence. No kitty.

Mountain lions can have extensive ranges and often don’t spend long times in one spot unless it’s a female with her baby kittens. Mountain lions eat deer, lots of them, and once the deer get spooky, the lions move on to other deer somewhere else. Deer carcasses equals evidence. No kitty.

A while ago, Daniel spotted a momma and an almost full grown kitten. Again, not that far from the mailbox. I was excited, then nervous. Calving season was starting, and although a mad momma cow would certainly try to chase a lion away, a little 80 pound calf could be just a quick snack for a lion used to a grown deer.

Figuring there wasn’t a chance at all to see the momma and kitten again, I went to the “viewing area” (nope, not gonna tell you where) and sat in my car. Son of a gun, a lion walked out of the willows. “Oh, my goodness! Oh, my goodness!” That’s about all I could say! My first images were actually videos, I totally forgot about still images. My little camera was zoomed all the way out, and much of my video is pixelated. I didn’t care, I had finally seen a lion!

The following couple of days, I was lucky enough to show the cats to the grandkids, film them just hanging out, up a tree, chewing on grasses, and leaving just before dark to, I assume, go hunting. Come to find out, it was a mom and TWO adult-ish kittens.

In the meantime, I’d talked to some neighbors about their experiences with lions. I’d heard many of the stories before, but it was fun to hear them again. I guess a long time ago, one hung out in one my cottonwood trees in my YARD, then in the cottonwood down by my chicken coop, then in a tree by the creek. Neighbors have had them on their porches, in their kids’ playhouse, in their open garage, on the highway (multiple times), and seen them chased off by, yup, mad momma cows!

The number of mountain lions in this country would probably astonish you. The counts of females with kittens was up to 30 in a few miles of road. They usually stay in those remote canyons, but with so many, others are coming closer to homes and highways. If Daniel hadn’t glimpsed those first two, we would have never really gone looking. We never would have known they were there.

Anyway, a couple of days of observation on my part, and then they were gone. Whew. Will they come back? Will we see them? All big unknowns.

Then, I drove home from work last week. It was dark. Up ahead I see eyes glowing in my headlights and I start to slow down. Probably deer on the road. Hmmm. Too short for deer. Multiple sets. Raccoons? NOPE. Finally, I see them. Three kittens. Not MY lions. Younger, maybe yearlings? Mom was no where in sight. I had my iPad on my passenger seat listening to an audio book. I grabbed it, swiped to camera/video and set it on my dash while I pawed through a bag looking for my good camera. It was worthless, not focusing on them anyway, but I did get a fair iPad video of the kittens.

Then another neighbor saw two young kittens in the middle of the day on the highway not far away. Another neighbor down the creek a bit, saw two little baby kittens. Someone close to town lost their dog to a lion and it was confirmed by the game warden.

I hope they stay away from everyone’s livestock. I hope they remain elusive… and lovers of venison.