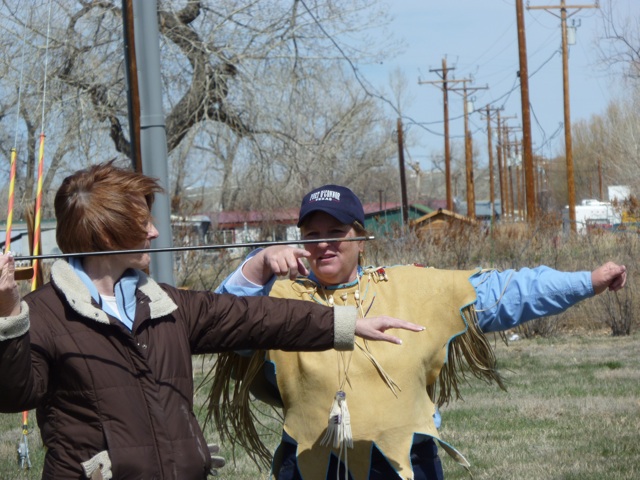 My trip to Kaycee’s Rendezvous turned out rather well. I gave my camera to a couple different adults and hoped they’d luck out and get at least one good photo… I was impressed!  Most of them turned out quite well!

The fourth graders have been studying history…and Kaycee’s bunch was entertained for a bit by local historian Leif Hanson (I think that’s spelled correctly).  He did quite well, regaling the kids with stories of the good bad guy, Flat Nose George… and of course, the Johnson County War.

Finally, the fourth graders from Buffalo showed up, and it was my turn for teaching PREHISTORY!  Though the day was cool and windy… and I was the only one that had to be outside… (brrrr!)  I managed to keep the different groups of little urchins focused on me…

See.  Pretty impressive, huh?  I think this pic is great, because you can tell the kids *are* listening!

Look,  I *am* the one they are listening to!

I explained the theory behind atlatls… the extra power and distance a hunter could achieve… especially since their quarry was megafauna (mammoths, mastodons, and other interesting characters).  Atlatls are basically another section of your arm… throwing the dart with impressive power.

I had a few adult volunteers help with the “how-to-throw-an-atlatl-dart” part. It’s always fun because the kids will cheer on an adult…

This guy was left handed.  Always a little disconcerting to stand the “wrong” way and show things “backwards”.

I encouraged this volunteer to watch where the tip of her dart is aiming… watch out, kids!

My favorite photo though…the looks on the kids’ faces as I launched a dart skyward.

Thanks to my volunteers for taking great photos, to Kaycee (via Victoria and Kari) for inviting me, and for the kids for being pretty awesome learners…P.S. – No children were harmed in this atlatl demonstration… but the grass was aerated!